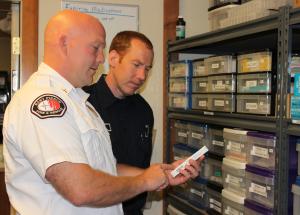 As EMS managers continue to look for ways to tighten budgets, some are returning to past practices as a way to trim a few dollars. East Pierce Fire and Rescue in Bonney Lake, Wash., is going back to using vials for some infrequently used drugs. “While there is a convenience factor for non-time critical calls, we found that there’s no negative effect to patient care, and it’s considerably cheaper,” says East Pierce Battalion Chief and Medical Services Officer Jeff Moore. “The question we need to ask is, “˜What do we need to be carrying?'”

The first drug Moore says they reviewed was adenosine, a drug their system is required to carry, but is seldom used. The district is switching from pre-loaded 6 mg and 12 mg syringes to vials with the same doses. The retail price for a 12 mg adenosine syringe can be as much as $104 each, vs. a 12 mg vial priced at $38. The paramedics will use plastic Luer-lock vial adapters to decrease the risk of an accidental needle stick. “There is no actual sharp needle used anywhere,” he says.

East Pierce is also taking advantage of new Washington state regulations allowing EMTs to draw up epinephrine and administer it IM to patients in anaphylactic shock. This will allow the department to stop purchasing expensive epinephrine auto-injector pens and switch to vials.

The retail price for a set of adult and pediatric auto-injector pens is now close to $210, Moore says. Each has a maximum shelf life of 18—24 months. Instead, East Pierce can purchase a 1 mg vial ampule for $2.58, plus a syringe with a safe needle for $.50. The fire district is able to stock each unit with a BLS kit that includes a 1:1000 vial for less than $5.

Some training was required, but Moore says it has been relatively easy. In Washington, EMS agencies developed comprehensive online and PowerPoint training programs that were shared, helping to keep the cost of the training to a minimum. Individual medical directors make the final decision whether to stay with the auto-injector pens or use the vials.

“The risk of accidental overdose is minimized by having the EMTs use a 1 cubic centimeter (cc) syringe to draw up the epinephrine from a 1 mm vial, instead of using a multi-dose vial,” Moore says. The problem is that 1 mm of epinephrine is packaged and sold only in a glass ampule. “To avoid the hassles of dealing with a glass ampule, we found that we could order epinephrine in 1 mm vials under the trade name 1:1000 adrenaline. We are now checking to make sure it’s pharmacologically the same,” he says.

The fire district is also reviewing whether to switch from nitroglycerin spray, at $209 per 60 meter dose bottle, to nitro tablets at $19.79 for a bottle of 100. While Moore admits, nitro tablets aren’t appropriate for every patient, for most the tablets are an acceptable alternative.

Switching from the more convenient preloaded syringes may not be a big deal for a small department, but a large department or a more rural service with a low call volume and numerous BLS and ALS apparatus spread over a large area, could see significant savings given a medication’s shelf life and how often it’s used.

East Pierce is a combination career and volunteer department that runs approximately 6,500 EMS calls per year from 14 stations. Including reserve vehicles, Moore says there are 18 ALS and more than 20 BLS apparatus that carry EMS supplies. “Making these switches could save us upward of $15,000 per year, approximately 15% of the supply budget,” he says.

“Those are dollars we can apply somewhere else.”

He recommends checking with suppliers to look at options and shopping around. “It’s amazing how much variability in cost there is between vendors. We found some vendors charging double for the very same product,” he says.

Better inventory control has also helped to keep costs in line. Since the district went to electronic patient contact records (ePCR) a little over a year ago, Moore says that tracking medications has become much easier. For example, he is able to generate a report that documents how much adenosine was used compared to how much was ordered per year.

“We found that we were ordering 80—90 units per year, but only using 14. Almost 90% of what we ordered was expiring,” he says. “The ePCR helped us improve just-in-time ordering and delivery. We were finding we were throwing away too much.”

Inventory control
Graham (Wash.) Fire and Rescue realized a significant savings when it switched to an off-the-shelf, computer-based, online inventory control system and customized it to fit a new supply philosophy. Instead of managing for “what if,” the department stocks medical supplies based on actual patient transports, saving time and money. “I know “˜what is’ and I plan for “˜what is,'” says Graham Assistant Chief of Medical Services Todd Jensen.

Graham Fire and Rescue serves approximately 72,000 citizens living in a 75-square-mile area south of Seattle. Jensen says the department average 12 patient contacts per day. Six of those turn into transports.

Graham uses AmbuTrak Inventory, Asset and Fleet Management software, a subscription service that costs the department $1 per day, per unit– whether that’s a medic unit or station. It inventories all hard and soft goods, from stretchers to glucagon. The system also notifies him when equipment is in need of scheduled maintenance.

Jensen says his goal was to implement a system that mimics the way the crews were already conducting rig checks. He wanted to identify what supplies he was buying under his EMS budget, when he was receiving them and where they were going.

Previously, the crews used paper checksheets for rig checks that Jensen had to manually review. “We used a flood-the- system approach,” Jensen says. “That system works well, but it’s not very efficient.” The new system is tied into the electronic patient care reports. Paper checksheets were replaced with an online form.

It took a year to implement the new system, but within the first seven months. Jensen says he noticed some trends he hadn’t seen before. He noted that the crews were going through about four times as many IV catheters as IV fluids. “Either my people were really bad at IVs or we were supplying a whole other agency,” he says. It turned out that neither was the case. “We were just throwing a lot away,” he says.

Under the new system, inventory is marked as it arrives. A notation indicates where it is stored. Usage is tracked on a weekly basis. But instead of tracking every 4×4 or pair of gloves, Jensen developed a system he calls, “Box Plus.” In this system, the medic unit is its own supply room, eliminating the need for a central supply. Weekly rig checks monitor the number of unopened, full boxes of supplies on the rig. Only unopened, full boxes are replaced.

At the start of the day, the crew hits a button on the online AmbuTrak system to view the supplies on the rig. Instead of going through the medications and looking at every expiration date, the system automatically alerts the crews if a drug is coming up on its expiration date or has expired.
Although it’s efficient, Jensen admits that it wasn’t an easy shift. “A big culture change had to take place,” he says.

The savings, however, were substantial. Jensen says that he went from approximately $64,000 of supplies on hand to around $31,000. “And we aren’t having things expire on the shelf. That’s the real benefit,” he says.
Another benefit is that, as a manager, Jensen can see specifically where the product is going. By expanding the report, he can see which patient received which drugs and supplies. He uses this information to prepare a weekly report for staff meetings to show the total usage of a product by unit, making supply adjustments as needed.

The new system helps maintain a level of standardization that has been difficult in the past. “As hard as you try to standardize a fleet, people do certain things and the rigs begin to morph,” he says. Now, even if a crew overstocks a certain item or moves it to a different location, everything gets put back in place on Monday. “It evens out and stays that way over time,” Jensen says.

There were initial concerns about having enough space on the rigs for the extra supplies, but Jensen says that it turned out not to be a problem. “By only stocking what was needed, we ended up with more space on the rigs,” he says. “The lesson is that we’re all running around with more than a week’s worth of supplies.”