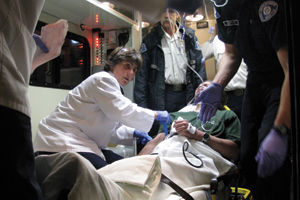 Oklahoma’s Emergency Medical Services Authority (EMSA) is in a fight for its survival, and it’s not alone.

By October 31, officials in Oklahoma City will decide whether to stick with EMSA, the city’s emergency services provider for the past 33 years, or switch to a service proposed by the Tulsa Fire Department.

EMSA provides EMS services to Oklahoma City and Tulsa. Every five years, a contract clause lets both cities reevaluate the system and consider outside options. Tulsa’s mayor has announced his city will stay with EMSA, saying there’s no financial or medical reason to change. Oklahoma City’s officials, however, are weighing their options.

Still, the routine contract provision reignited the debate over which system is better: fire-based EMS vs. stand-alone EMS.

“I think what’s very important is that people not make a judgment initially or finally in this type of process based on some form of personal valuation. Is the fire department inherently better or vice-versa?” says Jeffrey M. Goodloe, MD, FACEP, NREMT-P, medical director of the Medical Control Board, Emergency Medical Services System for Metropolitan Oklahoma City and Tulsa. “I don’t think that [kind of thinking] is beneficial to the patient or the personnel at either agency.”

Financial Considerations
The EMSA situation in Oklahoma is really a microcosm of discussions that are going on in municipalities across the country. Municipal budgets are being thinned, and officials who are looking for ways to slice expenses often see opportunities of adding revenue through EMS payments.

The oversimplified debate is that the fire service has done a great job at preventing fires, thus it needs to find ways to preserve firefighter positions. Taking over EMS, the argument goes, is a way to use the available manpower more efficiently. EMS folks, however, view it as a turf war.

“This is a battle that has been going on from the private side and the public side for ages,” says David White, chief executive officer of TransCare Corp. “The difference now is that municipalities have financial challenges in front of them they didn’t have before.”

And therein lies the heart of the debate: Which service can do the job in a more efficiently and clinically sound manner–and in this economic climate, less expensively?

The Tulsa Fire Department, for example, estimates it can raise $3.14 million in the first year. EMSA officials maintain any gains would be chewed up by the start-up costs involved with creating a new service.
If a change were made, it wouldn’t go into effect until 2013.

“I can get how sensitive it is, but the reality is municipalities are in deep economic problems,” White says.

However, both Goodloe and White say cost savings predicted at the outset of these debates rarely materialize in the long term.

Protecting Your Turf
How to stave off a challenge from a rival, be it fire based or another agency, can take some work.

“If I’m just looking at it from an EMS agency view, I want to protect my turf,” White says. “I’m going to make sure I’m not going to be on the front page of the newspaper talking about response times. I don’t want to show up in the press.”

Often lost in those discussions, however, is any talk of patient care and the effect on the consumer.

In the end, says White, the risk in these debates is that the discussions go public and then the people lose confidence in the services.

“If the fire guys and the private [ambulance] guys can’t figure out how they both bring value to the community,” White says, “then we start to lose confidence in the system.”

Says Goodloe, “The merits of a community decision about who provides ambulance transportation should start and end, whether it’s fire-based or not, with the medical standards.”
–Richard Huff, NREMT-B

Pro Bono
Ambulances Need Tender Loving Care Too
Your EMT driver tries to restart the ambulance after it suddenly shuts down at a red light. Your patient is looking up at you wondering what’s happening, but all you both hear is the ignition turning over. The driver picks up the radio and in that “embarrassed” voice asks for another ambulance to be dispatched due to “mechanical problems.”

Hopefully, the consequences aren’t much more than the provider’s embarrassment. But any mechanical failure could tragically delay your patient from receiving definitive care. A functioning ambulance can be just as important as a functioning AED, because failures at critical times can lead to catastrophic results.

When mechanical failures are unforeseen, unpredictable or accidental, the law generally would protect the EMS agency from liability. The fact that complex machines have the potential to break is something that courts and juries understand. But if the breakdown was predictable and could have been prevented, and the breakdown adversely affected the patient or harmed others, your EMS agency could be found liable.

As economic times get tougher, ambulance services may try to reduce expenses related to vehicle maintenance and vehicle repair. However, these savings may not be cost effective in the long run. By not performing regular oil changes and routine maintenance or not fixing a known problem that has been reported multiple times, you could be risking thousands of dollars and more importantly patient safety.

Vehicle insurance typically provides coverage from accidents, but not when the “damage” is the result of mechanical problems. So your liability coverage under your vehicle insurance may not help you if you’re successfully sued. Here are some tips to avoid liability for improperly maintaining your ambulance:

Follow the manufacturer’s guidance on proper maintenance of your vehicle. Ensure your vehicle service provider is competent in performing the task you’re asking them to perform.

Keep detailed maintenance and repair records on file. Anyone maintaining or repairing your ambulance should complete maintenance reports with detailed notes on what they did for the vehicle. Writing accurate notes is especially important for companies that have in-house maintenance personnel.

Conduct routine checks on your vehicles and document that you have completed them. You already (hopefully) check the equipment on the inside of the patient compartment; just add a check for the other parts of the ambulance (e.g., engine fluids, lights, sirens and horns). Document daily vehicle checks and retain that documentation for future defense.

Create a non-adversarial system to report possible maintenance issues. Every concern about ambulance safety should be taken seriously by management. Ensure your fellow providers understand the steps to take if they find something wrong with the ambulance and that there’s no retaliation for making good faith reports of vehicle problems. If an ambulance has a mechanical failure, you want to create the environment where providers actually report it.

In the event of a breakdown, follow your protocols. Mechanical failures happen, and it might not be any one person’s fault. Have a policy on back-up response. Communication is key. Whether it means dispatching another ambulance or asking for advice from your officer, you should err on the side of reporting it. Ensure you carefully document all the steps you took in an incident report.

Your community expects that when they call 9-1-1, they get an ambulance that actually works–one that’s capable of taking them to the hospital. Give your ambulance that tender loving care it deserves. In the long run, you’ll be rewarded with reliable service and reduced liability.

Hero of Our Own
John Shear, father of JEMS Director of Audience Development and Sales Support Mike Shear, was recognized for his courageous actions on March 12, 2011. That day, the 90-year-old shielded a 5-year-old child from a runaway horse at Santa Anita (Calif.) racetrack. He was hit and trampled doing so but has made a full recovery.

John has received numerous awards, including a Certificate of Recognition from the 59th Assembly District, being named “Hometown Hero” for the Sierra Madre July 4th parade, being awarded the Medal of Valor from the California State Firefighters Association and most recently, being named the 2011 recipient of the Harold M. Heimbaugh Nathan Hale Award from Kiwanis Cal-Nev-HA division. Heroes come in all ages.

Rise has been a volunteer since 1989 with Grant-Roberts County (S.D.) Ambulance Service. Rise is not only active on scene, but he also helps plan and set up rescue drills. As a CPR/AED instructor, he teaches first aid courses to local fire departments and youth groups. Rise plans to become a paramedic.

Edwards works for Indianapolis EMS. As a preceptor, Edwards gives her students feedback to ensure they learn from each experience, and she’s quick to question medical directors to increase her own knowledge. Her expertise has helped develop a new training program, policies and procedures.

Quick Takes
Blue Lights Now Legal on N.Y. Ambulances
The New York legislature has passed a bill authorizing ambulances to display blue lights in addition to their standard red lights (S5483-2011). Before this legislation, only law enforcement and fire vehicles were allowed to use the blue lights. Several studies, including those conducted by Ford Motor Company and the Florida Highway Patrol, have established that blue lights are more visible, especially at night, than red lights.

Under the new law, ambulances may use rear-projecting blue lights while operating in emergency mode. The rational for the rear-projected light as stated in the bill is to protect emergency responders as they work on the roadway.

An American Medical Response spokesman says the company has no immediate plans to retrofit their ambulances in New York, although he has read the studies and agrees the blue lights can be effective.

JEMS Editorial Board member and ambulance safety expert Wayne Zygowicz, EMS chief with Littleton (Colo.) Fire Rescue, says his department uses red and blue lights when responding, or “asking for right-of-way,” and then amber for “blocking right-of-way,” while they park.

Lead EMS Federal Agency Discussions Continue
In what may seem a never-ending story, the quest for a lead EMS federal agency continues. The consensus appears to be that EMS would profit from a lead federal agency much like the U.S. Fire Administration for fire and the Department of Justice for law enforcement.

A federal oversight agency could provide national standards, policies, strategies and funding. National standards and policies would make meaningful research more likely, which could lead to defensible funding requests. Most stakeholders in the discussion agree that daily EMS management should continue on a local level–community, region or state.

EMS organizations have different views of where EMS should fit into the federal government: NAEMT suggests Department of Health and Human Services; International Association of EMS Chiefs and the National EMS Labor Alliance favor the Department of Homeland Security; and Advocates for EMS has recommended the National Highway Traffic Safety Administration.

The Federal Interagency Committee on Emergency Medical Service submitted an options paper to the National Security Staff Resilience Directorate in May. The EMS community eagerly awaits the final decision. JEMS

0
Tube Talk This month, readers respond with varying viewpoints on a July JEMS feature article by Tony Garcia, BS, BSN, RN/EMT-P, that defends the use of prehospital endotracheal intubation (ETI) in the field (“Addressing Airway Issues: How to keep ETI a prehospital skill.”) Some agree that ETI is an essential prehospital skill, while others question its value.