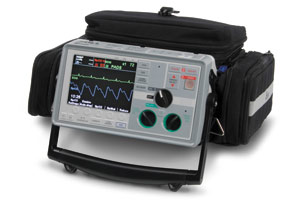 A number of agencies are ordering the new monitors outfitted with the CO-assessment feature. The San Bernardino City Fire Department (SBCFD) is converting from the M to the E Series monitors. “The last couple of sets will have the CO monitoring included,” says SBCFD EMS Captain Bernie Horak.

He says the SBCFD is purchasing the monitors with the integrated monitoring capability for two reasons–first to protect their own personnel, and second to protect the public.

“We are very careful to monitor our personnel for CO levels,” Horak says, adding that they’re especially alert to possible CO poisoning during wildland fires. “A number of common symptoms, such as headaches, fatigue, and confusion, can be caused by CO poisoning, and it’s critical that we have the ability to assess our firefighters’ CO levels so that it’s not missed on the fire ground.”

The convenience of the new monitors with the integrated CO measurement technology was the reason SBCFD made the purchase. “It’s built right in, so it’s seamless,” Horak says. “The easier we can make it to monitor CO, the more likely it will be done.”

In Western Taney County (Mo.), officials are in the process of upgrading to monitors with the CO-measuring capabilities.

Taney County Ambulance has been using handheld Masimo Rad-57 units for some time and has identified several patients with elevated CO levels. “We have been really impressed with it,” Berndt says. The crews not only get a reading for patients suspected of CO poisoning, but they’ve also been surprised to find patients who have been exposed in cases that weren’t obvious.

“We feel that now more than ever, patients should be monitored for CO,” he says, adding that he likes the new feature because it’s simple to use.

Berndt says that because the CO monitor works a lot like the pulse oximeter, training hasn’t been an issue. “If you feel it’s worth putting a pulse oximeter on a patient, it’s worth getting a CO reading too,” he says.

In northeast Missouri, Marion County Ambulance District officials knew they needed to measure CO levels, so they decided to upgrade existing E Series monitors and get the new CO measurement feature. Chief Training Officer John Clemens says that although some of the local fire departments that respond within the Marion County District employ the handheld Rad-57s, it’s a tool the emergency medical providers also needed to have. Clemens says that upgrading their monitors to include CO measurement was a convenient and cost-effective solution.

Clemens says they’ve been shocked at how many patients register with elevated CO levels. “Looking at those who are chronically exposed directly affects our paramedic’s treatment modality,” Clemens says. “It also provides an important [exposure to] rule out.”

Identifying patients with CO poisoning and being able to quantify the level of exposure is increasingly becoming a standard assessment when evaluating patients and determining the best course of treatment. Using the integrated, auto-displayed CO assessment feature on the ZOLL E Series monitors allows emergency responders to quickly and accurately detect CO poisoning with the touch of a button.