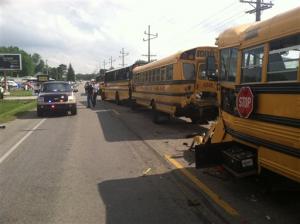 NORTH WEBSTER, Ind. (AP) – A school bus slammed into the back of another bus, setting off a chain-reaction crash involving four buses in northern Indiana, leaving dozens of middle and high students with non-serious injuries and one driver seriously injured.

Kosciusko County Sheriff’s Department Sgt. Chad Hill said the bus driver was taken by helicopter to Parkview Hospital in Fort Wayne. He said more than 100 students from Wawasee School Corp. were on the buses when the accident occurred about a mile north of North Webster, about 40 miles west of Fort Wayne.

Kosciusko Community Hospital spokeswoman Joy Lohse said 43 people injured in the accident were being treated there. None of them were in serious or critical condition. Lohse said she didn’t have any additional information, including how many of the patients were students or their exact conditions. A nursing supervisor at IU Health Goshen Hospital said four students being treated there were in good condition.

Hill said several other students were released to their parents and may have been brought to area hospitals for minor injuries.

The cause of the accident about 3:30 p.m. Wednesday wasn’t immediately known. Photos from the scene showed the bus in the back of the collision had heavy damage to the front end, with the hood of the vehicle lying in the road. The bus in front of it had a deep dent in the back. The damage to the other two vehicles was not as visible.

Hill said the accident apparently occurred when the bus at the front apparently stopped to let a student off.

Children who were not injured were taken by another bus to Wawasee Middle School where they were picked up by their parents, Hill said.