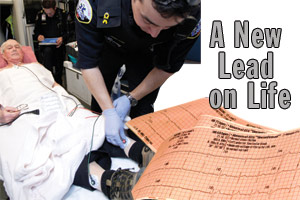 Cardiac monitoring is a fundamental ALS skill that’s frequently used in the prehospital and hospital settings. The purpose of ECG monitoring is to “monitor” a patient’s heart rhythm and detect changes that could be life-threatening. Changes, such as V-fib and asystole, demand immediate assessment of the patient’s pulse and breathing. Lead II has traditionally been the most commonly used monitoring lead since its appearance in 1910 with Willem Einthoven’s invention of the electrocardiograph.1 Paramedics are taught how to interpret rhythms in lead II, and this skill is tested on the standardized exams given at the state and national levels. These traditional exams have established a paradigm of lead II monitoring in patients. However, is this lead appropriate for all patients? Should we be monitoring other leads?

Prehospital cardiac monitors are now also 12-lead machines, and modern EMS systems utilize 12-lead ECGs on a regular basis. In doing so, a new paradigm is emerging. Instead of putting patients on the monitor, we’re “throwing down tradition” and running the 12-lead first in an effort to triage those patients with acute coronary syndromes. But has the shift from putting patients on the monitor to running a 12-lead caused us to miss something? With some nationwide programs educating providers on the importance of early 12-leads and recognition of ST-elevation myocardial infarction (STEMI), it will become an expectation that all prehospital providers perform 12-leads ECGs–even those who never have before.

Birth of a Paradigm
In the beginning, we had 2- or 3-lead monitors, and learned lead placement by such sayings as: “white right, red bed,” or “smoke over fire.” This simply meant that we put the leads on a patient’s right upper chest, left upper chest and under the last rib on the patient’s left side. This method has carried over even with the 4-lead monitors we have now. And, although the leads had the placement noted on the wire–”LA” for left arm, “RA” for right arm and “LL” for left leg–some providers still put them on the chest. Why do you think this is?

I’ve asked nurses and paramedics why we do this, and I think I found an answer “¦ other than the usual, “Well, that’s the way I was taught,” response. It stems from the installation of telemetry in the hospital. Telemetry allows nurses to put patients on a monitor and then leave the room to care for other patients. A monitor tech watches the monitors, and if something changes, the nurses are called back to the room.

After a few “false code” events from patients moving their arms to brush their teeth, which looked like V-fib if you weren’t in the room to see what the patient was doing, the nurses realized that limb-lead placement wouldn’t work in an unattended telemetry setting. Instead, an “alternative” placement on the chest was adopted so nurses could leave the room without worrying about artifact. The nurses then taught some paramedics this “trick,” and the paradigm was born. So, if you thought we placed electrodes on the patient’s chest to cut down on artifact, you were correct … sort of.

Remember, the type of artifact that occurred in the hospital setting was from patient movement after nurses left the room. Field providers are right at the patient’s side while on scene. They sit next to them in the ambulance and generally don’t leave, so any movement is resolved and artifact understood. Besides, we ask patients to “hold still” while we get the tracing, right?

Today’s Reality
Although minimizing artifact has been used as an excuse to keep limb leads on the chest, this does not justify losing the proven value and validity of a full 12-lead ECG. Truth be known, the limb leads must go on the limbs for a valid and accurate 12-lead ECG.

Remember, a 12-lead is a diagnostic tool with incredible power to triage acute coronary syndromes, and it must be utilized correctly. The modified limb-lead placement for lead II monitoring can result in missed STEMI, heart blocks and other conditions. In fact, the American Heart Association noted in a 1975 study that the electrodes may be placed on any part of the arms or the left leg as long as they’re below the shoulders in the former and below the inguinal ligament, which is where your legs attach to your body.

I know you’re thinking, “I’ve never heard of that!” That’s because it was published in 1975. Most EMS literature searches (or paramedics) don’t go back 35 years. So, for a 12-lead ECG, the limb leads must be on the limbs. Now you’re thinking, “If we do that first, then we’d have to go back and get four more electrode pads to put the patient back on the monitor in 3-lead mode by moving the leads back to their chest, right?” This isn’t necessary for several reasons. For one, have you tried monitoring this way? If not, you’ll be surprised how little artifact you’ll have if you leave the limb leads on the limbs.

Resistance
At this point you may be wondering, “Why is there such resistance to correcting lead placement?” Well, after traveling the world for 20 years and presenting annually at seminars on 12-lead ECG interpretation, I have a sneaking suspicion.

In lead II, we were taught how to read rhythms and some arrhythmias. It’s well known that the lead II rhythm strip isn’t at all diagnostic of certain conditions, including some blocks, structural damage or some lethal arrhythmias. A single lead II also can’t diagnose or triage such conditions as hemiblock, bundle branch blocks (BBBs), hypertrophy, and STEMI. In fact, H.J.L. Marriott, MD, has noted that lead II is a poor choice for monitoring because BBBs and V-tach look the same, and the onset of the deadly proximal left anterior descending (coronary artery) occlusion will be totally missed.

Many providers were never taught these facts in training, and it still isn’t taught as part of the paramedic core curriculum. What we didn’t know didn’t bother us. However, if you fully understood the conditions referenced above, you wouldn’t monitor in lead II.

At a seminar in 2000, Marriott mentioned lead II’s ability to differentiate V-tach from supraventricular tachycardia (SVT) with a BBB was only 34%. He named that fact as the reason the algorithm for tachycardia came to be known by the term, “wide complex of uncertain origin” in 1990. It made a big impression on me. After hearing his detailed explanation, my motto became, “In lead II, you got no clue.”

A New Lead
The modified lead MCL-1 (originally called CL1) was introduced in 1968.6 To run this lead, you keep the limb leads RA and LA in their standard position and place the LL electrode on the V1 position (the fourth intercostal space just at the right sternal border.) Select lead III on the monitor, and you’re now viewing lead MCL-1.

This configuration of leads gives a clear chest for cardioversion and defibrillation, and chest auscultation will also be easy. Lead MCL-1 closely resembles V1, so it offers many diagnostic advantages over lead II:

Conclusion
EMS practice today is dramatically different than in the past. Instead of simply monitoring heart rhythm, we’re now using the 12-lead as a diagnostic tool. Because the diagnosis of STEMI is time-critical, it’s become necessary that paramedics acquire 12-lead ECG readings within five minutes of arrival on scene. With high-tech communications, it’s possible to send the 12-lead ECG to the hospital or alert the hospital physicians early, so the hospital can prepare.

We must also monitor the patient in 12-leads to speed up and increase the accuracy of lethal arrhythmia recognition. To do so, we must adopt a new 12-lead paradigm, and the first step of that change is placing the leads on the limbs for diagnostic accuracy and then monitoring other leads, such as MCL-1. JEMS