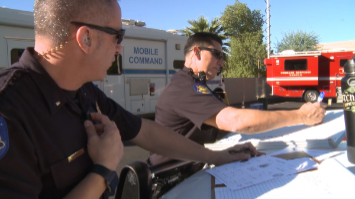 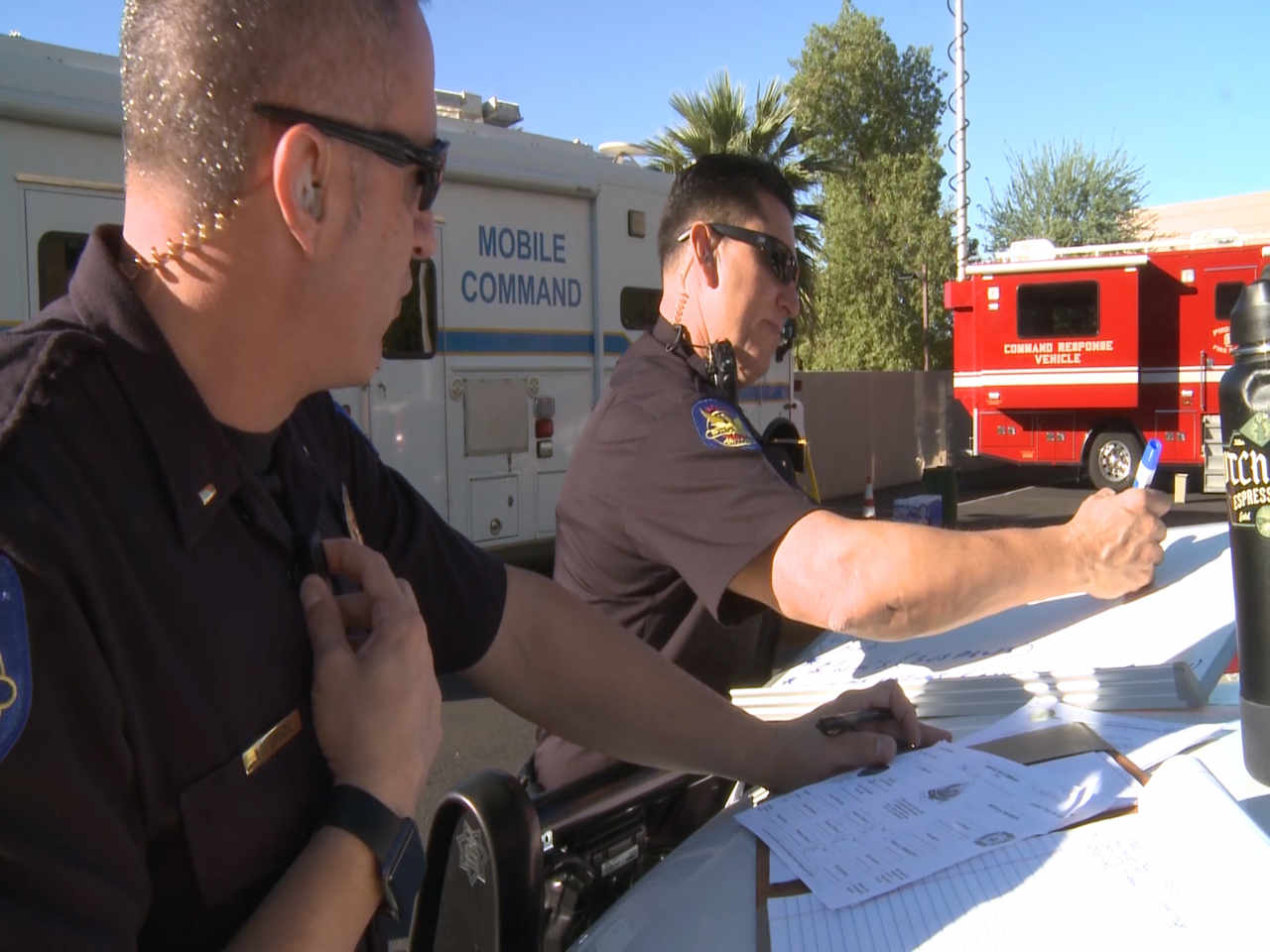 In 2015, Phoenix Children’s Hospital invited the Phoenix Fire and Police Departments to participate in an active threat exercise at the hospital’s main campus. The exercise — a hostage-barricade situation — was a wake-up call for regional public safety responders.

Public safety organizations make a commitment to protect, to honor, to serve[KS1] . However, the exercise at Phoenix Children’s shined a light on all of the ways we were falling short of our goals — and the impact this could have on our public.

It became painfully clear that law enforcement (LE) and Fire-EMS were operating in silos, not as partners. Police were focused on their goal — to contain and neutralize the threat — while Fire/EMS waited outside for LE to clear the scene so we could enter and treat the victims. With no communication or partnership between our agencies, a full hour passed before EMS could enter the building to care for the wounded.

In an emergency like this one, an hour is simply too long. Clearly, we would have to do better.

Following the exercise, LE and Fire/EMS came together to debrief, identify the gaps, and make a plan for the future. At the heart of the plan was a commitment to improve communication and coordination.

We knew that in violent situations — from a lone operator, active shooters or terrorists employing teams using multiple weapons systems or vehicle ramming — LE is the primary hazard mitigatory. This meant that Fire/EMS would need to work within that framework, and, in partnership with police, provide life-saving treatment in the midst of an active threat. The need to create this formal framework was reinforced during a regional tabletop exercise conducted by the Joint Counterterrorism Workshop Series (JCTAWS) in 2016.

We began with a slogan to simply and clearly spell out our roles and responsibilities: for LE, it’s “stop the killing.” For Fire/EMS, it’s “stop the dying.” Then, we began to formalize a plan on how we would share resources to respond to multiple events across a large region.

In addition, while the fire department utilizes automatic aid, connecting Phoenix FD with 27 other departments in cities across the metro, LE has no such system. While the dispatches are connected through a phone network, they don’t have the ability to auto-engage regional resources like 911 Fire/EMS services.

Even so, it’s imperative for LE to maintain resiliency within 911, even amid a large-scale violent event or mass casualty natural disaster. Individual agencies would have to come together as a force multiplier, but how would Fire/EMS integrate with LE in such a situation?

We began to develop a model for deploying resources in threat situations, building in solutions to enable federal, state and local resources to communicate and come together in a rapid way while safeguarding the resiliency of 911. We also ensured our plan could be duplicated within other law and fire agencies across the region to maximize our efficacy. The result was a deployment model that closely mirrors NFPA 3000 with unified planning, response and recovery guidance, and civilian and responder safety considerations.

However, no matter how airtight our deployment model, we understood that successful emergency response hinged on communication and coordination — for small and large threats. We also knew that building and strengthening relationships between our agencies and with our partners in the community would be integral to future success. Over the next two years, we began building blocks of training for law, fire and EMS to train and work on the street together. We also explored new opportunities to work alongside key organizations in greater Phoenix.

To put our efforts to the test, Phoenix Fire partnered with the Phoenix Police Department and Lieutenant Jay Johnson to secure a Complex Coordinated Terrorism Attack (CCTA) grant from the Federal Emergency Management Agency and the Department of Homeland Security. While the City of Phoenix served as the administrator of the grant, it incorporated public safety agencies through the metro region including Scottsdale, Tempe, Mesa, Gilbert, Avondale and Glendale.

The intention of the CCTA grant was to test our response to a scenario that would completely overwhelm the 911 system. 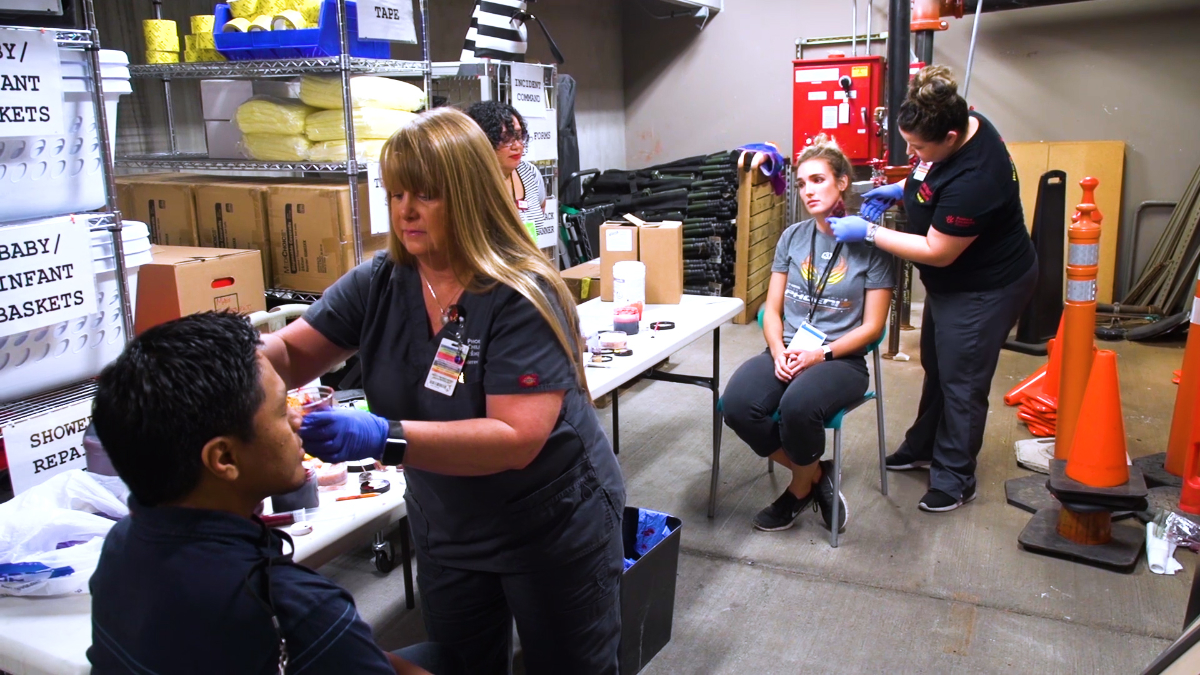 At the time the CCTA was secured, I had been working on a new concept for an active threat exercise at Phoenix Children’s.

Ten years ago, our exercises focused on anthrax, pandemics, accidents with multiple traumas and heat-related illnesses. Today, a shooting inside a hospital’s walls has emerged as a serious threat, and it’s critically important that hospitals and public safety agencies prepare accordingly.

I approached the Homeland Defense Bureau with an idea to partner on a large-scale, three-day exercise at Phoenix Children’s. With our main hospital campus in Phoenix and satellite locations across multiple jurisdictions, I knew we could create a scenario with a reach and scale that had never been attempted. We also recognized the opportunity to bring diverse agencies together to improve threat response for the region and for Arizona’s pediatric health system.

An event this size and scale is unheard of for a hospital — and especially for a children’s hospital. However, our clinicians, staff and leadership put their full support behind the exercise and its promise of improving the safety of their patients and families.

After six months of planning spearheaded by Betsy Dragan and me, we deployed the exercise in Oct. 2018. While Phoenix Children’s conducts drills and exercises on a regular basis — hospitals are required to rehearse two emergency response exercises each year — the CCTA was our largest, most complex and most successful training yet.

On the first day of the exercise, “bombs” (disguised as stuffed animals) were dropped at Phoenix Children’s satellite locations. Day two simulated a group of active shooters in the emergency department and parking garage — all while the hospital remained open — and included a stand-off with police, a hostage situation, and more than two dozen casualties. Day three was the investigation and recovery process for the hospital. 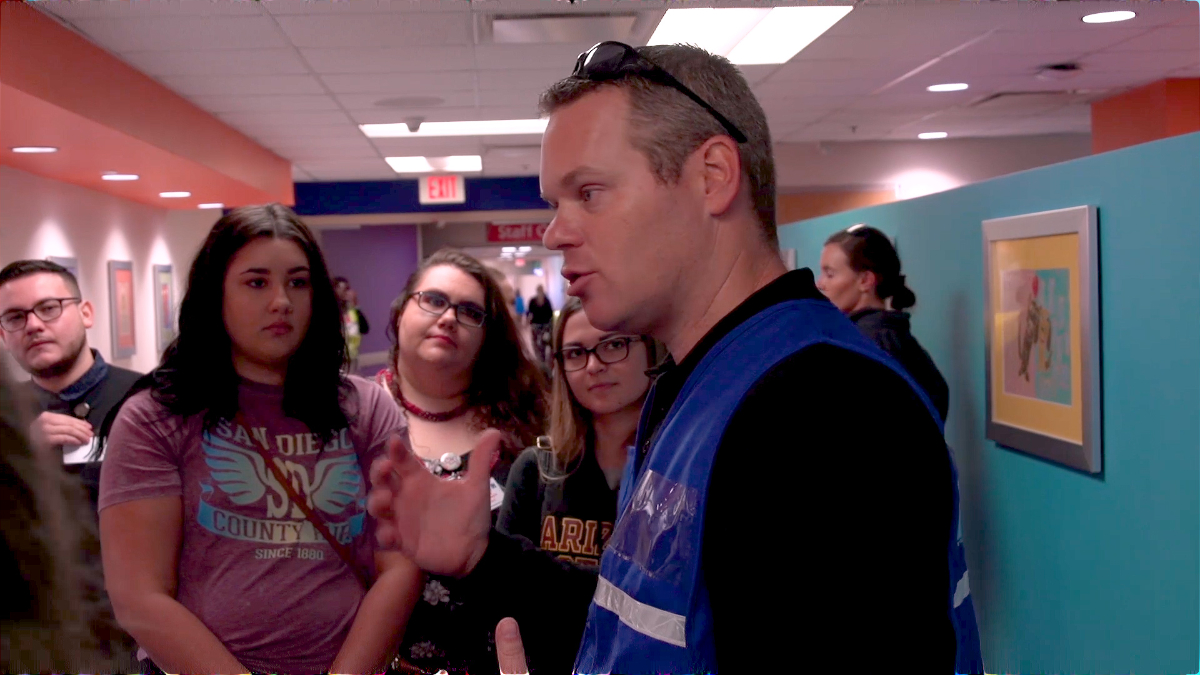 A Phoenix police officer briefing the actor victims on what to expect during the exercise.

In addition to validating the deployment model fire, EMS and police had worked so hard to implement, a few best practices emerged:

Chief Petersen: No matter how great your plan, it all comes down to communication.  It’s about communicating with other public safety agencies, connecting law, fire, federal agencies and outside EMS agencies, and working in partnership with external stakeholders like Phoenix Children’s.

We knew that our ability to respond in a unified way, with any measure of success, to a CCTA or mass casualty event was predicated on how well we respond together on routine calls for service. Over the next two years, we made a concerted effort to build relationships between battalion chiefs and precinct lieutenants, captains of fire trucks and patrol sergeants. We shared meals, shared facilities, and built relationships on the streets, in precincts and battalions, and in firehouses. This was all in service of taking care of the public, in coming together as a force multiplier, and in building resiliency in the system to respond to events large and small.

Similarly, we work with Phoenix Children’s on an ongoing basis, constantly evaluating our processes to ensure we’re as prepared as possible for emergency events. Indeed, the CCTA was one in a long line of hospital-based trainings for our team.

The investment in these relationships paid off in droves at the CCTA. LE, Fire/EMS and other federal and state public safety agencies all responded together. Our crews monitored the police radio channel, heard there was a shooter in the building, arrived at the staging location, and exchanged information with their LE counterparts. Once police confirmed the shooter was in custody and the threat was contained, they deployed the rescue sector with teams of four moving in with force protection from the police department. All victims were treated and extricated over a 40-minute timespan — a drastic improvement over the prior exercise at Phoenix Children’s.

Ken Crouch: Day one of the exercise tested the regional intelligence sharing capabilities among the agencies and with Phoenix Children’s staff at multiple locations. On the first day, IEDS were placed at five Phoenix Children’s satellite locations across the Phoenix metropolitan area. We relied on Terrorism Liaison Officers (TLOs) from across the region to respond, make contact with the staff and share intelligence back to command.

The event started when an urgent care clinician spotted something out of the ordinary — a lone stuffed tiger lying haphazardly in the waiting room. It struck her as odd. She contacted the Phoenix Children’s Security Office to report the suspicious item. Officers called the threat into the Arizona Counter Terrorism Information Center (ACTIC). TLOs and a bomb squad were dispatched to the location to evaluate the threat.

Meanwhile, similar incidents were being reported at other Phoenix Children’s sites. The ACTIC soon recognized that the threat was coordinated. Because our staff recalled their training — to “see something, say something” — the bombs were quickly disarmed, and the threat was contained.

While an exercise of this size — spanning so many jurisdictions — had never been attempted, the coordinated responses from all parties provided a quick and safe resolution.

Chief Petersen: On day 2, an active shooter entered the building. The damage was extensive, and more than 25 people were wounded. Even so, the number of casualties was greatly reduced because the hospital staff had received extensive training in Stop the Bleed, a national effort to train bystanders in addressing a bleeding emergency.

In addition to training staff across the hospital in attending to life-threatening bleeding, Phoenix Children’s had also created individual first aid kits (IFAKs) and disseminated them throughout the campus to ensure they were within reach in case of emergency.

This was a gamechanger; the hospital staff had provided appropriate emergency treatment to every single gunshot victim. It enabled EMS to extricate patients quickly and move them to more definitive care. It’s a shining example of community preparedness efforts like Stop the Bleed in community and private sectors. 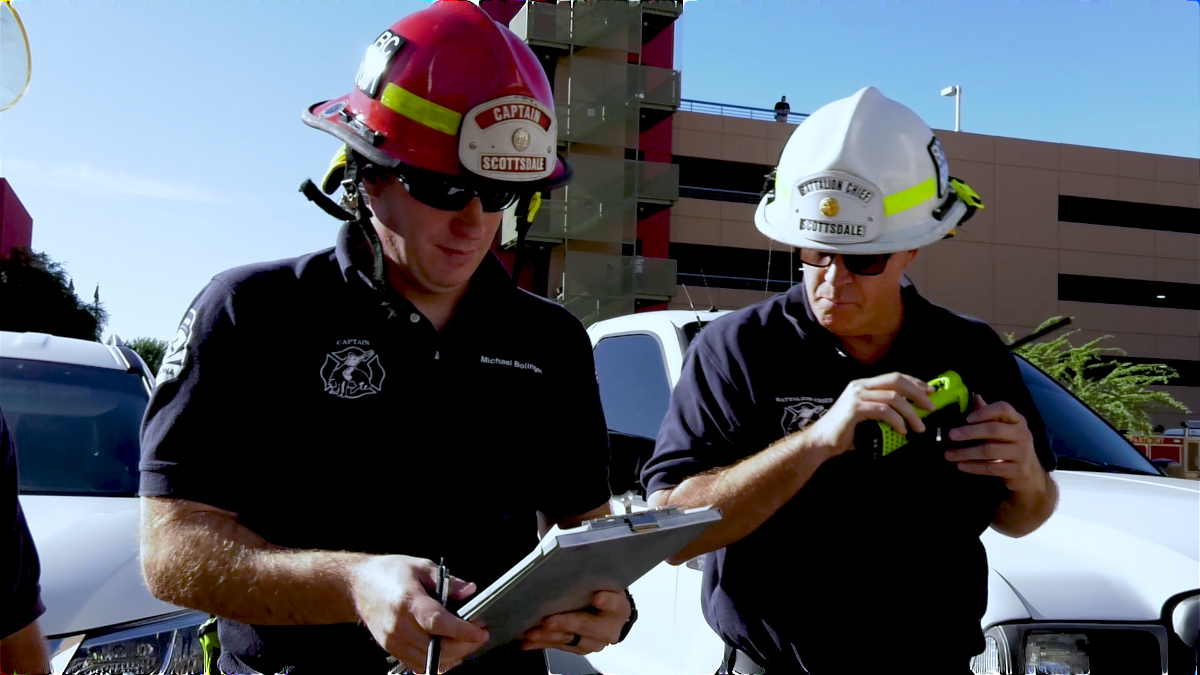 Lt. Johnson: Day three of the exercise provided an opportunity to connect and regroup on our efforts.  A panel of federal, state and local public safety experts, including police officers, members of the FBI Violent Crimes Bureau, Active Shooter response experts, homicide detectives and public information officers convened to offer guidance on the investigative and recovery phase. It was a chance to discuss how we would respond in a real-life threat, from protocols and roles and responsibilities to our shared goal of getting the hospital back up and running as soon as possible.

Ken Crouch: The panel was an invaluable part of the exercise. It helped our staff understand what would happen in a real-life threat and how public safety protocols would affect Phoenix Children’s operations. For example, if a shooter fired in a hospital emergency department, the police would shut down the ED for investigation and HAZMAT cleanup. This was eye-opening for our people and prompted important conversations on how to provide the best care to our patients, even in the midst of a crisis.

Lt. Johnson: Communication, coordination, relationships, and an ongoing investment in training were the keys to success for the CCTA. We will continue honing our skills to ensure we’re as prepared as possible to respond to and recover from catastrophic events in service of our public.