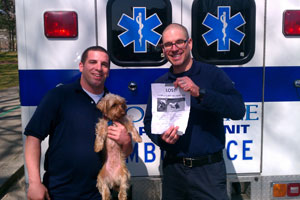 PROVIDENCE, RI, ISSUED APRIL 16, 2012″¦What started out as “the worst birthday ever” turned into the best one for Phil Oliveira, thanks to two alert Coastline Ambulance Services EMTs.

Coastline, located in East Providence, is a division of the Dartmouth, MA Stat- Southcoast Emergency Medical Services, which the Dartmouth firm recently acquired.

“Things were fine until the night before my birthday and then it all went to the dogs!” said Oliveira, Assistant Director/Coordinator of Student Conduct at Rhode Island School of Design.

Oliveira and his fiancée Libby Flores had been working on off-leash training with Chewie, a two-year-old Yorkie Dachshund mix affectionately referred to as a “Dorky.” Libby was putting Chewie through her paces outside their apartment on Benefit Street in Providence, when suddenly the 12-pound pup became spooked and took off, headed for Olney Street.

“People were trying to help us catch her, but within minutes she was nowhere to be found,” said Oliveira who searched neighborhood streets until 1 a.m. the next day — his birthday — with no luck.
“I finally went to bed, thinking we’d never find her or we’d get a call in the morning that she had been hit. It was 40 degrees that night, and for a small dog, none of the likely scenarios looked hopeful.”

Not ones to give up so easily, Oliveira and Flores spent the morning of March 19th preparing and placing posters on trees, checking with the Providence Animal Shelter to see if Chewie had been found, posting on Craigslist, Facebook”¦and in general hoping for “a miracle.”

“Chewie is small and timid and was a rescue dog before I got her, so I thought the chances of her being caught were slim,” said Oliveira, who went back on the streets in search of the missing canine while Flores, a medical student at Brown University, stayed home to study.

“Libby called me around 1:30 in the afternoon to say she had a call from a couple of EMTs from Coastline Ambulance who had seen Chewie throughout the morning, seen the posters, and put it together. By the time they called, they had recruited some bystanders to corner Chewie at Roger Williams Park, and were trying to persuade her out from under a car — I practically broke the sound barrier getting to them!”

The Coastline EMTs, Chris and Joey, eventually nabbed the little adventurer and placed her in the ambulance — a sight for Oliveira’s sore eyes. The dynamic duo apparently spotted the dog on Hope Street and followed her all the way down to Roger Williams Park on North Main Street.

“I’m so grateful to Chris and Joe — they took the time to actually look at the posters and kept their eyes out for Chewie. They’re incredible and I can’t thank them enough,” said Oliveira.

And as for Chewie”¦.well, according to her owner she is no longer training off-leash and is content to be home after her “night out in the big city.”
“It was definitely the worst and best birthday all rolled up in one”¦but Chewie is happy, healthy and home, so all is definitely well that ends well.”