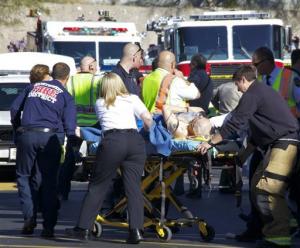 CFSI and MedicAlert gave the Excellence in Fire Service-Based EMS Awards in the following three categories:

“The CFSI/MedicAlert Foundation in Excellence Award, in its first year, is an encouraging sign that fire and EMS can together make great strides in providing quality service to citizens no matter the department type, reinforcing Craig Fugate’s earlier statement that “teamwork is the key,'” said JEMS.com News Editor Bill Carey, who attended the event.

According to a written statement provided by CFSI and MedicAlert, Odessa Fire Company “employed innovative solutions to enable them to provide outstanding, safety-focused, EMS services in response to rapid growth in a previously rural area.” It has focused heavily on training, requiring all new members — including drivers — to be certified first responders, as well as applying for and receiving a $420,000 grant to purchase 150 Masimo RAD 57 units to aid in detection of carbon monoxide poisoning in both patients and providers.

And last but not least, Northwest Fire/Rescue District was recognized for its leadership during the response to the Jan. 8 mass shooting during a public meeting with U.S. Congresswoman Gabrielle Giffords and its high level of EMS training programs.

According to the statement, “The eyes of the nation, if not the world, were on the Northwest Fire/Rescue District on January 8th as they responded to a mass shooting during a public meeting with Congresswoman Gabrielle Giffords. While many precious lives were lost that day due to the acts of a deranged gunman, the training and response of Northwest Fire/Rescue District saved many lives at this tragic event. Northwest’s Fire Service-Based EMS system was tested in this very challenging situation, and the organization performed remarkably well. The fire/EMS service community across the nation was very proud of role the District played that day.”

The awards were started to “recognize fire departments for their contributions to fire-based EMS and quality patient care,” said CFSI President of the Board of Directors William Jennaway during the dinner. Eligible applicants submitted an essay describing their best practices. According to the CFSI website, these were reviewed and judged by a selection committee on the following criteria:

For more on carbon monoxide monitoring in Delaware, read about the 2010 EMS 10: Innovators in EMS supplement to May JEMS.