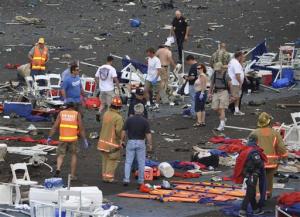 RENO, Nev. (AP) – Amid the horrific aftermath of the nation’s deadliest air racing disaster, a crash that killed nine and sent about 70 people to Reno-area hospitals, a sort of calm pervaded.

Witnesses were spattered with blood and pieces of flesh, yet video of the scene shows paramedics, police and spectators attending to the wounded with a control that seems contradictory to the devastation.

Officials and those in the tightly-knit air racing community credit not only a detailed plan for just such a crash, but the type of people at the event: pilots, veterans and others accustomed to dealing with a high-pressure situation.

Doctors, nurses and military veterans from the crowd volunteered their services to emergency crews, said Reno Fire Battalion Chief Tim Spencer, a 29-year veteran who has worked at the air races for 27 years. Those without medical skills helped firefighters transport the injured.

“It wasn’t uncommon to see one firefighter and three people in civilian clothes carrying a litter to the proper area” for evacuation, Tim Spencer said. “Everybody pulled together perfectly and worked side by side.”

Such cooperation helped save Ed Larson, one of the victims cut down by a wall of shrapnel kicked up when the Galloping Ghost, a souped-up WWII-era P-51 Mustang fighter plane, crashed into the VIP section Friday, disintegrating over a two- to three-acre area.

Metal fragments and wreckage hit Larson, 59, in the head and back and legs, shredding his calf and severing his Achilles tendon. He was knocked unconscious but came to as he was being loaded on a transport helicopter.

“All I saw was a real coordinated effort,” Larson said from a wheelchair at Renown Regional Medical Center, which handled 36 of the most severely injured patients, including two who died.

“This is the worst I’ve seen,” said Dr. Mike Morkin, the emergency services director at Renown. He did his trauma training at Cook County Hospital in Chicago and helped in the aftermath of Chicago’s Paxton Hotel fire that killed 19 people in 1993. Yet he said he had never seen so many patients with such severe injuries at one time.

Paramedics, police and firefighters, hospitals and event organizers had drilled for such a disaster, some just hours earlier.

“This happened so fast, there was just a sense of shock. But people were very calm. You know, they didn’t know me. They came, held my hand, told me I was going to be all right,” Noah Joraanstad, a 25-year-old commercial airline pilot from Anchorage, Alaska, told The Associated Press from his hospital bed at Northern Nevada Medical Center in Sparks. “They walked into a scene where people were amputated, whatever, and just carnage everywhere, and they decided to help. To me, those were the real heroes.”

Emergency workers were quickly putting into practice the skills they’d learned in drills. They separated the wounded depending on the severity of injuries as ambulances and transport helicopters moved in. A Vietnam-era Huey helicopter from a military display was pressed into service to fly victims to the hospital.

“It was triage on the tarmac,” said David Edgecomb, 41, a volunteer security guard from Paradise, Calif., who said he saw a man in an electric wheelchair dead in the spectator area. Edgecomb cut strips of bunting from the VIP boxes into strips to be used for tourniquets, while larger pieces of the material were used to cover body parts.

The Rev. Thomas Babu was at St. Michael’s Catholic Church four blocks from the airport when he saw the fire engines and ambulances streaming past.

He held hands and prayed with the family of a woman who had been killed.

“Tragedy brings people together. We become more good human beings when there is something bad happening around us,” he said.

Gov. Brian Sandoval said some of the air race emergency crews had dealt with victims just two weeks ago when Eduardo Sencion opened fire in Carson City with an AK-47 assault rifle. He shot 11 people before turning the weapon on himself. Four victims died, including three members of the Nevada National Guard at an International House of Pancakes restaurant.

Michael Houghton, president and CEO of the Reno Air Races, said it took 62 minutes to get all of the injured on their way to area hospitals, a pace of about one each minute.

“They kind of came in waves,” said Morkin, the Renown hospital ER director. “You’re just running from one patient to the next. You stabilize one … and you go to the next patient.”

Some lost limbs, others had severe facial wounds. There were many patients with broken bones or lacerations. Two of the patients in critical condition had massive head injuries.

Yet it could have been far worse, officials said as the National Transportation Safety Board investigated what went wrong at the National Championship Air Races afternoon.

The plane crashed at the edge of the crowd, narrowly missing the grandstand where thousands more people were watching. Spectators were sprayed with aviation fuel, but the plane did not explode, and its fuel did not catch fire.

Ken Liano, a structural engineer and aircraft consultant, was surprised the plane didn’t explode into a fireball, as was the case in a fiery accident a day later at a West Virginia air show that killed the pilot but did not harm spectators.

“I guess God was on the people’s side,” Liano said.