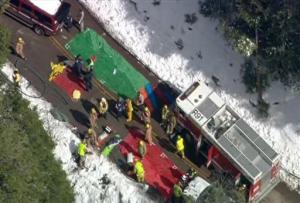 TWIN PEAKS – As they scrambled to pull injured people out of their vehicles and into ambulances and helicopters, rescuers could spare only a moment to reflect on the largest crash most of them had ever seen.

“I can’t get so anxious that I can’t do my job,” said Crest Forest Fire Protection District paramedic Evan Halquist, who was one of the first responders to a crash on Highway 189 that left one dead and 23 injured on Monday. “You can’t look to the back of the bus, worrying that you won’t be able to get to that person in time. You’ve got to do the person in front of you, then the next seat.”

“It’s still kind of a blur, but we’ve been doing a lot of talking,” Garber said. “Just re-living it.”

Some of the memories are graphic, Garber said, and so the department will continue to offer counselors for anyone who needs them.

But he said many of the conversations turn to how the response could have been smoother.

“What can we do better? What kind of training can we do?” Garber asked. “That’s kind of our firefighter and cop mentality.”

Despite the harrowing nature of Monday’s call, he said he would make only minor improvements to the response, along the line of faster paperwork processing.

Overall, he said he was proud of the response and grateful for help given by about a dozen local agencies – particularly the way they adapted to the difficult location – a bus that went off the road, down an embankment and hit a tree.

“You learn it one way in the textbook, (but) there’s always curveballs,” Garber said. “You arrive and (at first) you only have seven people to take care of traffic and this narrow road where only one ambulance can get through at a time.”

Garber didn’t have a full responder count Tuesday, but he said he ordered 11 ambulances, five fire engines and four helicopters.

“It’s probably the biggest (mass-casualty incident) I’ve seen,” said Garber, a Gulf War veteran. “I’m a paramedic still and I’ve seen a lot of the gore part of it, but this was different.”

Combined with the narrow roads, the rescues required quick decisions about whom to send to which hospitals and when.

“We try to get the most critical patients out first,” he said. “Usually, an ambulance will transport one patient. We tried to give them a mix of patients – one immediate, one minor, so we can at least get people off the scene and to the hospital,” he said.

That kind of thinking got everyone help with minimal pain, Garber said.

And now responders begin preparing for the next incident, according to Halquist, a five-year veteran.

“You can only train in a broad sense,” he said. “Realizing how many agencies came together and worked together (Monday), you just have to pull all your training and experience together. And then you do it.”