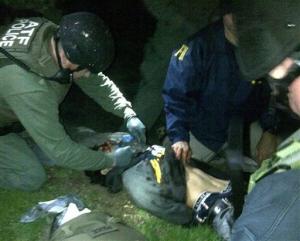 BOSTON (AP) – As the lone surviving suspect in the Boston Marathon bombing lay hospitalized under heavy guard Saturday, the American Civil Liberties Union and a federal public defender raised concerns about investigators’ plan to question Dzhokhar Tsarnaev without reading him his Miranda rights.

What Tsarnaev will say and when are unclear – he remained in serious condition and apparently in no shape for interrogation after being pulled bloody and wounded from a tarp-covered boat in a Watertown backyard. The capture came at the end of a tense Friday day that began with his 26-year-old brother, Tamerlan, dying in a gunbattle with police.

U.S. officials said an elite interrogation team would question the Massachusetts college student without reading him his Miranda rights, something that is allowed on a limited basis when the public may be in immediate danger, such as instances in which bombs are planted and ready to go off.

ACLU Executive Director Anthony Romero said the legal exception applies only when there is a continued threat to public safety and is “not an open-ended exception” to the Miranda rule, which guarantees the right to remain silent and the right to an attorney.

The federal public defender’s office in Massachusetts said it has agreed to represent Tsarnaev once he is charged. Miriam Conrad, public defender for Massachusetts, said he should have a lawyer appointed as soon as possible because there are “serious issues regarding possible interrogation.”

There was no immediate word on when Tsarnaev might be charged and what those charges would be. The twin bombings killed three people and wounded more than 180.

The most serious charge available to federal prosecutors would be the use of a weapon of mass destruction to kill people, which carries a possible death sentence. Massachusetts does not have the death penalty.

President Barack Obama said there are many unanswered questions about the bombing, including whether the Tsarnaev brothers – ethnic Chechens from southern Russia who had been in the U.S. for about a decade and lived in the Boston area – had help from others. The president urged people not to rush judgment about their motivations.

Massachusetts Gov. Deval Patrick said Saturday afternoon that Tsarnaev was in serious but stable condition and was probably unable to communicate. Tsarnaev was at Boston’s Beth Israel Deaconess Medical Center, where 11 victims of the bombing were still being treated.

“I, and I think all of the law enforcement officials, are hoping for a host of reasons the suspect survives,” the governor said after a ceremony at Fenway Park to honor the victims and survivors of the attack. “We have a million questions, and those questions need to be answered.”

The all-day manhunt Friday brought the Boston area to a near standstill and put people on edge across the metropolitan area.

The break came around nightfall when a homeowner in Watertown saw blood on his boat, pulled back the tarp and saw a bloody Dzhokhar Tsarnaev hiding inside, police said. After an exchange of gunfire, he was seized and taken away in an ambulance.

Raucous celebrations erupted in and around Boston, with chants of “USA! USA!” Residents flooded the streets in relief four days after the two pressure-cooker bombs packed with nails and other shrapnel went off.

Michael Spellman said he bought tickets to Saturday’s Red Sox game at Fenway Park to help send a message to the bombers.

During the long night of violence leading up to the capture, the Tsarnaev brothers killed an MIT police officer, severely wounded another lawman and took part in a furious shootout and car chase in which they hurled explosives at police from a large homemade arsenal, authorities said.

“We’re in a gunfight, a serious gunfight. Rounds are going and then all of the sudden they see something being thrown at them and there’s a huge explosion,” Watertown Police Chief Edward Deveau said Saturday of the melee.

The chief said one of the explosives was the same type used during the Boston Marathon attack, and authorities later recovered a pressure cooker lid that had embedded in a car down the street. He said the suspects also tossed two grenades before Tamerlan ran out of ammunition and police tackled him.

But while handcuffing him, officers had to dive out of the way as Dzhokhar drove the carjacked Mercedes at them, Deveau said. The sport utility vehicle dragged Tamerlan’s body down the block, he said. Police initially tracked the escaped suspect by a blood trail he left behind a house after abandoning the Mercedes, negotiating his surrender hours later after an area resident saw blood and found the suspect huddled in his boat.

Chechnya, where the Tsarnaev family has roots, has been the scene of two wars between Russian forces and separatists since 1994. That spawned an Islamic insurgency that has carried out deadly bombings in Russia and the region, although not in the West.

Investigators have not offered a motive for the Boston attack. But in interviews with officials and those who knew the Tsarnaevs, a picture has emerged of the older one as someone embittered toward the U.S., increasingly vehement in his Muslim faith and influential over his younger brother.

The Russian FSB intelligence service told the FBI in 2011 about information that Tamerlan Tsarnaev was a follower of radical Islam, two law enforcement officials said Saturday.

According to an FBI news release, a foreign government said that Tamerlan Tsarnaev appeared to be strong believer and that he had changed drastically since 2010 as he prepared to leave the U.S. for travel to the Russian region to join unspecified underground groups.

The FBI did not name the foreign government, but the two officials said it was Russia. The officials spoke on condition of anonymity because they were not authorized to talk about the matter publicly.

The FBI said that in response, it interviewed Tamerlan Tsarnaev and relatives, and did not find any domestic or foreign terrorism activity. The bureau said it looked into such things as his telephone and online activity, his travels and his associations with others.

An uncle of the Tsarnaev brothers said he had a falling-out with Tamerlan over the man’s increased commitment to Islam.

Ruslan Tsarni of Montgomery Village, Md., said Tamerlan told him in a 2009 phone conversation that he had chosen “God’s business” over work or school. Tsarni said he then contacted a family friend who told him Tsarnaev had been influenced by a recent convert to Islam.

Tsarni said his relationship with his nephew basically ended after that call.

As for Dzhokhar Tsarnaev, “he’s been absolutely wasted by his older brother. I mean, he used him. He used him for whatever he’s done,” Tsarni said.

Albrecht Ammon, a downstairs-apartment neighbor of Tamerlan Tsarnaev in Cambridge, said in an interview that the older brother had strong political views about the United States. Ammon quoted Tsarnaev as saying that the U.S. uses the Bible as “an excuse for invading other countries.”

Tamerlan Tsarnaev studied accounting as a part-time student at Bunker Hill Community College in Boston for three semesters from 2006 to 2008, the school said. He was married with a young daughter. Dzhokhar Tsarnaev was a student at the University of Massachusetts Dartmouth.

As of Saturday, more than 50 victims of the bombing remained hospitalized, three in critical condition.