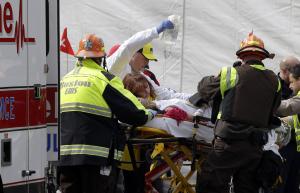 Like most of you, I was glued to the news on April 15 after being alerted about the Boston Marathon bombings. The scenes were horrific as they played out live on every news network and social media site.

Because of the preplanned, scheduled media coverage of the marathon and the strategic location of camera crews at the finish line, the world got an unprecedented look at one of the most demanding mass casualty incidents ever managed in the U.S.

Pressure-cooker bombs loaded with nails and small steel BBs, packed in backpacks and positioned in two ground-level locations near the finish line exploded within 15 seconds of each other. The flash flames and pressure waves that resulted after detonation, as well as the spray of shrapnel intentionally placed in the homemade bombs, hit and leveled those in close proximity.

The horrific injuries inflicted on 176 people were identical to those suffered by troops after improvised explosive device blasts in Iraq and Afghanistan. The only difference is that the injuries occurred on American soil. It happened at one of the most popular sporting events in our nation, was directed at unsuspecting, innocent men, women and children, and was witnessed by millions of people on live TV and cell phone videos.

While most of this was probably planned by the perpetrators for maximum death and physical trauma on the victims and emotional impact on our nation, what 26-year-old Tamerlan Tsarnaev and his 19-year-old brother Dzhokhar didn’t realize was that they were detonating their bombs at the epicenter of medical preparedness in Boston.

Role of Preparedness
The Boston Marathon is one of the best pre-planned events in the world. Friends whom I have known and trained with from Boston EMS (BEMS), many with 30-plus years on the job, were positioned with their pre-staged ambulances within eyesight of the detonation sites.

In addition, the primary medical tent–a massive structure organized and operated by the Boston Athlete Association each year and staffed by scores of physicians, residents, medical students, critical care nurses, EMTs and paramedics– was within 50 yards of the finish line.

In total, 103 BEMS EMTs and paramedics were assigned to the marathon. In addition to the regiment of 26 ambulances in regular city service and numerous private service units that were integral to the marathon and back-up to city units, 14 BEMS ambulance were specifically assigned only to the marathon.

The BEMS ambulances assigned to the marathon were pre-staged on nearby side streets and outside the medical tent when the blasts occurred. They were immediately pressed into service and augmented by a wave of other ambulances from nearby districts and ambulance services.

In addition, some of the most clinically exceptional medical centers in the world were located within one mile of the medical tent, just six short minutes by ambulance–allowing ambulances to transport patients, do a quick turn-around and rapidly return to the tent/triage area. They included Massachusetts General Hospital, Brigham and Women’s Hospital, Boston Medical Center, Boston Children’s Hospital, Tufts Medical Center and Beth Israel/Deaconess Medical Center.

As one Boston EMS official told me, the incident was the “perfect storm for MCI management.” Within seconds of the explosions, BEMS crews and units were in action. They were so in sync with the staff at the medical tent that they knew and worked well within the course of their normal operations at the Boston Marathon.

Role of Training
And athough the Marathon bombings were a huge departure from normal marathon operations, which usually consist of blister and heat management issues, the crews were drilled and familiar with their assignments and vehicle staging, and the patient processing areas and procedures. They had been trained, equipped and prepared for terrorism and mass care events for decades and simply adapted to this escalated event, easily converting their response to this multiple-casualty incident of unprecedented proportions.

The fact is that MCI management must be a simple extension of daily operations to be effective. The BEMS system was so efficient on April 15 that the first 11 critical patients were delivered to trauma centers in just 18 minutes–from time of blast to arrival at hospital. In all, a total of 91 serious and critical patients were triaged, treated and transported in just 22 minutes. This doesn’t happen by accident; it occurs from training, a constant thought process and operational efficiencies.

The real take-away message of this article is that Boston EMS had trained and prepared for an incident of this nature for years and were completely prepared for it on April 15. You see, Boston EMS has (pardon another old cliché) “the right stuff.” They get it and have gotten it for decades.

For example, long before the bombing of the World Trade Center on Sept. 11, 2001, BEMS, a highly respected third-service EMS provider, had a special operations division that prepared its entire staff for special events and an MCI of this nature, and deployed specialized vehicles for special operations and MCIs.

Many services are myopic to “outside” ideas. But not Boston EMS. In 1996, I offered an MCI management workshop in the Boston area and was surprised to see Boston EMS special ops team members in the class. Despite the depth of experience in the staff, BEMS was open to new ideas and approaches to MCI management and sent personnel to the workshop.

When I created a triage tag in the early ’90s that introduced a transportation stub to ensure even patient distribution and documentation, Boston EMS not only adopted it but also ordered a uniform shirt pocket size for everyday use. The reason is illustrated by the wording added under the service name on the tags: “Experience is the Difference.”

BEMS crews, which now use the SMART Triage Tag system, are familiar with their tags and use them whenever their initial resources are taxed and they are required to shift (smoothly) into an MCI/triage mode.
For those not familiar with the Boston EMS system, it’s worth noting that Boston, like Seattle, operates with a heavy BLS emphasis. Its sharp EMTs are deployed on lots of BLS units, supported by well-trained and tenured paramedics who are strategically deployed on just a few ALS ambulances.

Cited along with Seattle in a special Bob Davis series in USA Today as two of the best major-city EMS systems in the U.S. because of their efficient use of BLS/ALS resources and incredibly high cardiac arrest resuscitation rates, Boston and Seattle EMS understand you cannot give optimal ALS care without a solid BLS system.

Key Role of Tourniquets
When all hell broke loose at the marathon and panicked spectators were fleeing the scene, the men and women of BEMS raced to the nearly 200 horribly injured trauma patients. They weren’t trying to be heroes; they were simply executing protocols and procedures to locate, find, triage, stabilize, move and distribute scores of patients as they had been trained to do.

But perhaps the most significant contribution by BEMS occurred in 2005 when members of their staff, along with multiple Boston physicians, studied the use of tourniquets in the field and decided that BEMS should take a leadership position and again carry and use tourniquets in Boston. They did this instead of waiting for the rest of the world to realize what they already knew: tourniquets are safe and effective and should be available to control massive hemorrhage.

Ten percent of combat deaths in the Vietnam War resulted from uncontrolled hemorrhage from extremity wounds and many of the deaths were due solely to ineffective field hemorrhage control methods.1
BEMS EMTs also saw the lifesaving results being realized on the battlefields of Iraq and decided to unequivocally prove that they could have the same results on the streets of Boston. They did just that and published their results in the August 2008 issue of JEMS in the epic article, “The Return to Tourniquets.”(1)

The Boston study, along with a special October 2008 JEMS editorial supplement titled “The War on Trauma: Lessons learned from a decade of conflict” and a forward-thinking article in that supplement titled “Tourniquet First: Safe & rational protocols for prehospital tourniquet use,” ventured into uncharted EMS waters and illustrated how tourniquets can, and should, be used as temporary hemorrhage control devices when you’re overtaxed by a seriously injured patient or a host of patients at an MCI.(2)

These early articles and the March 2012 JEMS article, “Extreme Bleeds: Recommendations for tourniquets in civilian EMS,” resulted in most states and EMS Systems returning tourniquets to the armament of their kits and vehicles. But the effort started in Boston.(3)

There’s absolutely no question that tourniquets played a key lifesaving role on the streets of Boston on April 15, especially on patients who had multiple traumatic amputations. EMS systems that currently don’t carry at least four tourniquets per vehicle need to obtain and deploy them immediately because their crews could be just one backpack away from disaster.

In the past, BEMS has been training on a “hemorrhage control bundle,” including education on tourniquet and hemostatic agents, as well as recognizing the need to rapidly identify and control life-threatening hemorrhage.

Conclusion
We should all salute the crews and management and medical directors of Boston EMS. After years with the efforts and actions of EMS crews going unnoticed or unrecognized by the media, the location and focus of camera at the Boston Marathon educated the world about the benefits of high quality, rapid moving and efficient EMS.

The Boston EMS crews, supervisors and BAA medical staff, and many Boston-area mutual aid EMS agencies and crews, became media stars. Wearing distinctive colored identification vests, protective gear and helmets, there was no question who they were or what they were responsible for at that finish line war zone. They didn’t seek or expect stardom, but they fittingly received it.

They were decisive, polished and professional.  They were well-trained, disciplined and effective, and they made us all proud. Thank you, Boston EMS.