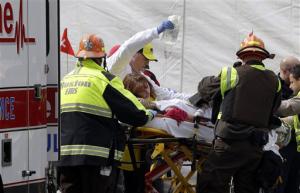 BOSTON (AP) – Boston hospitals quickly mobilized to treat the dozens of injured from the explosions at the Boston Marathon finish line.

Dr. Alisdair Conn, chief of emergency services at Massachusetts General Hospital, said 22 patients were treated in the hospital emergency room. At least six were critically injured, some with amputated legs.

He said in his 25 years at the hospital, he had never seen such carnage. He said it was like “what we expect from war.”

Emily Clark, a Boston College student who ran in the marathon, went to the hospital and offered to donate blood, but was told to come back on Tuesday because staff was too busy.

Ashley Buelow of Lynn, who was visiting her sick child, saw ambulances dropping off victims and later some family members arriving to check on loved ones. She described the scene as a sad one.