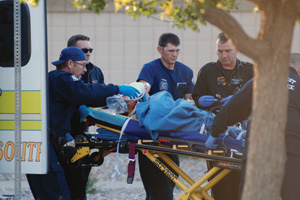 Providers from Southwest Ambulance, Gilbert (Ariz.) Fire Department and Gilbert Hospital Native Air Omniflight work to attempt to resuscitate a 6-year-old drowning victim. According to Mike Connor, spokesman for the Gilbert Fire Department, a father called 9-1-1 after his two sons didn’t come home from a bike ride. He went out searching and noticed their two bicycles next to a canal near their home in Gilbert. A bystander pulled the boys out of the water. Jean Machnicki, a Gilbert Fire Department community services coordinator, said there have been 25 water-related incidents in 2011 in Maricopa County and hopes this year will be different. Pediatric resuscitation is a critical training and operation component of every EMS system.

This article originally appeared in January 2012 JEMS as “Aggressive Response.”