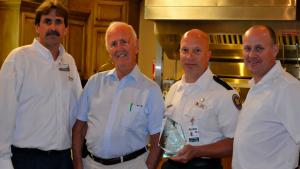 Acadian Ambulance Service has honored one of its veteran training officers for his outstanding service.

Richard Pellerin, who has worked for Acadian for 22 years, was the first recipient of the Dr. Eugene Nagel Award of Excellence. The annual award will recognize one of Acadian’s field training officers.

The award was presented at Acadian’s yearly meeting of training officers and medical directors, held to discuss the latest clinical research and other advances in EMS care.

Field training officers are responsible for ensuring that safety and industry standards are met. Pellerin became an FTO in 2002; he was one of the company’s first two training officers. He is a paramedic, has worked as an operations supervisor and an employee health and safety officer and was a medical platoon sergeant during Desert Storm.

Nagel attended the meeting and presented his namesake award. As one of the most respected people in the EMS industry, he is best known for developing the nation’s first telemetry unit and for coining the term “paramedic.”

“I have a long history with Acadian,” Nagel said, adding that the company “may very well be the best EMS service in the country.”

Since 1971, Acadian has been committed to providing the highest level of emergency medical care and transportation possible. In the past decade, the company has expanded to include a diverse suite of services in health, safety and transportation. Acadian’s six divisions are Acadian Ambulance Service, Acadian Monitoring Services, Air Med, Executive Aircraft Charter Service, National EMS Academy and Safety Management Systems.