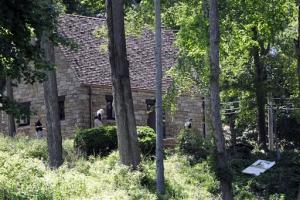 NYACK, N.Y. (AP) – A presumed natural gas explosion in a college building Tuesday blew out windows, sent a door sailing through the air and injured seven people, but authorities said none of the injuries was life-threatening.

After the blast, gas rose to “explosive” levels – as high as 70 percent – in the manholes at Nyack College outside New York City, said Mike Donohue of Orange & Rockland Utilities. He said natural gas was assumed to be the cause of the explosion, which happened shortly before noon and caused serious damage to the basement and first floor.

A female student and six employees were taken to the hospital. The school sent out a tweet saying that “Everyone is doing ok.”

The explosion also started a fire that was put out by sprinklers, said Gordon Wren, director of Rockland County Emergency Services.

Donohue said the gas was turned off and the detected levels of it subsequently fell. Utility workers were trying to find the source of the leak to find out whether it was in the basement or in the lines leading to the building, he said.

The building, known as the Sky Island Lodge, is both an administrative and classroom building for the Christian college, which is about 25 miles north of New York City.

“Thankfully, we were out of session,” he said. He said the student had been there to take a test.

South Nyack Mayor Bonnie Christian said, “Had it been last month, that would have been a real problem.”

She said that soon after the explosion, “the gas smell was horrendous.”

The college is near Nyack Middle School, where students were kept inside as a precaution, and later taken to Nyack High School, Christian said.

“It sounded like a boom,” said Gail Fleur, communications director for Nyack Public Schools, who heard the explosion from the administration building about a block away. “It sounded like we were having some roof work done. We thought somebody dropped something on the roof.”

Graduate student Piero Gorriti, 23, was in a different building when he heard the explosion, which the Lima, Peru, native likened to the sound of a bombing.

FBI spokesman Jim Margolin said there was nothing suspicious about the explosion. Orange & Rockland and the county sheriff’s office were both investigating.