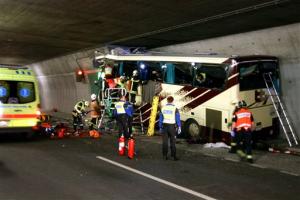 GENEVA (AP) – A tour bus slammed into a tunnel wall in the Swiss Alps in a horrific accident that killed 22 school children and six adults returning to Belgium from a joyous ski vacation, police said Wednesday.

Another 24 students were hospitalized, police spokesman Jean-Marie Bornet told The Associated Press, after one of the deadliest highway accidents in Swiss history left the front of the bus mangled, trapping some people inside. The police chief described a “scene like a war.”

The bus carrying 52 people, including students of around age 12 from two different Belgian schools, hit the tunnel wall shortly after 9 p.m. Tuesday night on a highway near the southern town of Sierre, Switzerland, in an area of popular ski resorts.

Authorities were still identifying all the victims, said Didier Reynders, the Belgian foreign minister. It was unclear exactly how the accident happened, he said.

“It is incomprehensible,” Reynders said.

Belgian Prime Minister Elio Di Rupo called it “an extremely sad day for all of Belgium.” He planned to fly to Switzerland on Wednesday, and the Belgian government was arranging planes to fly parents and relatives of the victims to the site.

Police said the students had spent the last few days at a ski camp and were on their way back to the Belgian provinces of Brabant, Flanders and Limbourg.

While they were there, students at one school kept a blog that brimmed with enthusiasm.

“Today was totally the best,” one girl wrote. “The adventurous walk was tiring but mega-cool. We won first prize for cleanest room. Tomorrow it’s going to be colder. Byyyeeee!”

On day five of the vacation, a teacher posted a note meant to reassure parents back at home. “For now we do not see much homesickness,” the teacher wrote. “But from the reactions of the children we gather that they miss you a little bit.”

The bus was carrying students from two towns – Lommel, east of Antwerp, and Heverlee, near Leuven. In the tunnel, it veered, hit a curb, then rammed into a concrete wall, police said. The front of the bus was heavily damaged, making it difficult for people to get out. Some had to be freed by rescuers.

“The bus hit the barrier stones on the right side of the road. It then hit the tunnel wall head on in an emergency stop space,” police said in a statement. “Because of the strong impact the bus was badly damaged and several passengers were trapped in the wreckage.”

The police chief in the canton of Valais, Christian Varone, told a news conference that rescuers were greeted by what he called “a scene like a war.”

“We have had a number of serious accidents in Valais but nothing like this, with so many young victims,” he said.

Initial indications are that no other vehicles were involved in the crash, which occurred in a stretch of tunnel where the speed limit was 100 kilometers per hour (62 miles per hour).

“We will examine everything to find out what happened,” said Valais prosecutor Olivier Elsig.

The highway was closed in both directions to aid in the rescue. Some eight helicopters and a dozen ambulances took victims to hospitals. Dozens of firefighters and police, 15 doctors and three psychologists were called to the scene.

“There is this terrible fear and uncertainty,” Andre Joseph Leonard, the archbishop of Belgium, who was in Heverlee by coincidence, told the AP. “There are about eight about whom we don’t know what happened, leaving their parents in terrible fear.”

A government spokesman said a crisis center has been set up and an emergency number provided for families.

The Alpine city of Sierre, near Sion, the capital of Valais, is a gateway to the Val d’Anniviers tourist region and is connected to the Crans-Montana ski resort by funicular railway.

The Top Tours company, based in Aarschot, about 25 miles (40 kilometers) northwest of Brussels, was in charge of the bus that crashed. A woman who answered the phone at the company’s offices declined to comment, but Belgian Transport Minister Melchior Wathelet said it has a good safety record.

“The company has an excellent reputation. The drivers had arrived (in Switzerland) the night before and rested on the day before the departure. It seems that the rules regarding driving and rest time were respected,” said Wathelet. He added the bus that crashed was relatively new.

Two other buses, carrying students from schools in the Belgian towns of Beersel and Haasrode, arrived safely back in Belgium on Tuesday, apparently without having seen the accident.

Dutch foreign ministry said 10 of the children on the bus were Dutch, but said it was not clear if any of them were among the dead.

The previous worst accident in a Swiss highway tunnel happened in 2001, when two trucks collided in the Gotthard tunnel, killing 11 people.

One of Europe’s most tragic tunnel accidents happened in March 1999, when 39 people were killed after a truck caught fire in the Mont Blanc tunnel between France and Italy. The blaze burned for two days while firefighters tried to reach victims and vehicles trapped in the tunnel under Western Europe’s highest peak.

At midday, the blog of the Sint Lambertusschool in Heverlee was still online, showing kids smiling and frolicking amid the snow.

“Things are super here in Saint-Luc. The skiing, the weather, the food. Its all not bad at all,” one boy posted on Saturday. “Tomorrow I play in the Muppet Show. … I’m now reading the book ‘Why Dogs Have Wet Noses.’ Very interesting! I miss you all.”

Melvin reported from Brussels. Frank Jordans in Geneva, Raf Casert in Heverlee, Belgium, and Robert Wielaard in Brussels contributed to this report.