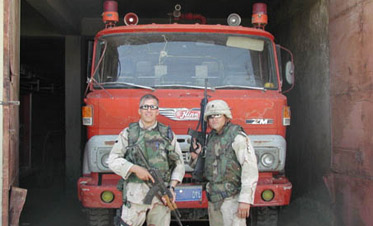 Dr. Alexander Garza”ž– a former EMT, flight medic, EMS medical director, public health official and combat surgeon — has been picked to lead the Department of Homeland Security_s Office of Health Affairs (OHA) as assistant secretary and chief medical officer. Learn more about which calls he remembers, invaluable skills he has learned from being in EMS and how his time in the field shaped him as a leader.

We started our interview by asking Dr. Garza to briefly summarize his career up until this point:

“Prior to joining DHS in August 2009, I spent 13 years as a practicing emergency physician, medical educator and researcher. Most recently, I served as the director of military programs and research at the ER One Institute at the Washington Hospital Center. Before that, I was the associate EMS medical director for the state of New Mexico and before that EMS medical director for Kansas City, Missouri, Health Department. I also served in the U.S. Army Reserve as the public health team chief for a civil affairs team working with Special Forces during Operation Flintlock in the Trans Sehal region of Africa. During Operation Iraqi Freedom, I served as a civil affairs officer and battalion surgeon. I was also assigned as a special investigator and medical expert for Major General Raymond Odierno. Prior to becoming a physician, I worked as a paramedic, flight medic and EMT-B.””ž

Q: How, when and why did you first become involved in EMS?
A: I first became involved in EMS in 1987 when I attended EMT school during my first summer in college. A combination of factors influenced my decision to become involved in EMS, including my love for the television show “Emergency!” That was the best show ever. Perhaps more importantly, though, was my mother, who worked the night shift as an emergency nurse at the local hospital. She would regale me with stories that made the work sound exciting and challenging.”ž

Q: Do you remember your first call?”ž
A: I don’t remember my first call, perhaps because I was so nervous. I spent the first part of my EMS career as an attendant for a BLS transport services, which was not very memorable. I have had quite a few calls I can recall as if they were yesterday, however, most of them are calls that were memorable only because of the emotional insult.”ž

I remember one of my first experiences being on a call for a rape victim who was found on the side of a highway, covered with mud after being left in a ditch. Her hands, feet, and eyes were bound with duct tape. She was cold and shivering, half from being soaked from the rain and half from the brutal attack she had just suffered. I could not begin to understand how one human being could do this to another.”ž

I remember having to pronounce a little girl dead inside a house. It was in the peak of the summer, and her house did not have air conditioning. As a result, she slept on the downstairs couch where it was cooler. She had been shot in the head from a drive-by shooting — an innocent victim of a raging gang war. I remember flying a boy from a Missouri farm. He was mentally challenged and had wandered into the family pool without anyone knowing and drowned. I again knew there was nothing we could do, but we chose to fly him to the hospital; it seemed like the right thing to do. His family was devastated, and I found a small corner of the ER where I cried as well.”ž

Q: What was your favorite call?”ž
A: I am not sure I have a favorite call, but both of the calls where I assisted in child birth were fun. One was actually on the hood of a car, and the other was in a mobile home. The hallway was too tight for a stretcher and a stair chair was out of the question, so we had to deliver the baby right there on the water bed. We didn’t have to wait long. Mom did most of the work, and we let Dad cut the cord.

Q: Which position have you found to be the most challenging?
A: I believe that my position as the assistant secretary and chief medical officer for OHA is the most challenging of my career so far. In EMS, there’s a clear delineation of authority, but here there’s a good amount of overlap and shared responsibility.”ž

Q: What do you see as your primary role at the Department of Homeland Security?
A: My primary role is to act as the department’s principal authority on all medical and health matters, but I would also like to go above and beyond the advisory role and truly help protect the health security of the nation.”ž

Q: How do you feel your experiences overseas and in public health will help you in your new role?
A: In Iraq, I helped rebuild medical infrastructure, and we had to do that work in the context of war and with competing interests. It was difficult, but we were forced to listen to all sides. What one person says is the truth may not be the truth. We talked to everybody and then tried to set out the facts. In the end, you make the best decisions you can based on what you know, but always keeping in mind our mission — which was to rebuild health care. We had to balance our duties as service men and women while helping the Iraqi people. Balancing security with synchronization was challenging because I had to fire the original health director, appoint an interim and then arrange an election for the eventual health director. The main point, though, was to listen, engage and involve the different parties.”ž

Q: What advice do you have for EMS providers who want to take on more of a leadership role?
A: It’s critical to develop one’s listening skills and to never accept that you know everything. You want to be confident, but aware and perpetually curious. Never stop learning or reading. Know where your weaknesses are and address them. Surround yourself with smart people and rely on them for advice.”ž

Q: If you could tell field providers one thing, what would it be?
A: The best approach is to think about things and don’t just react to them. Take time to get a good medical history and put things into context. You are not just a technician, so you should always be developing professionally.”ž