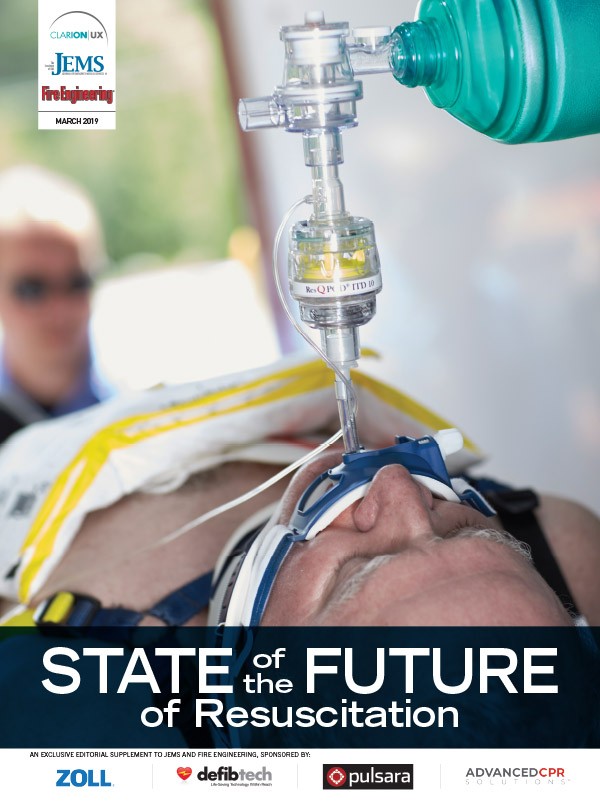 Supplement Introduction: The Future of Resuscitation

The State of the Future of Resuscitation supplement presents the proceedings and recommendations from the conference of the same name, which was held in September 2018 in Oakland, California, and where the International Resuscitation Collaborative identified six areas within an optimal bundle of OHCA care where new interventions have been developed and have been shown to synergistically improve neurologically favorable survival rates.

Telecommunicator CPR has been shown to be an effective intervention to improve survivability from OHCA, and it’s an untapped, underutilized multiplier of potential for successful resuscitation.

Over the past eight years, government and non-profit organizations have developed mobile app initiatives to bridge the gap between a cardiac arrest event and the arrival of a traditional prehospital response.

Community Response to Cardiac Arrest in the Netherlands

The Netherlands has a nationwide response system that alerts trained citizens when they’re near someone who’s experiencing an out-of-hospital cardiac arrest (OHCA) and helps ensure early defibrillation using a readily-available AED.

Use of a bundled approach to CPR and post-resuscitation care that includes one or more interventions known to reduce reperfusion injury is essential.

Head-up CPR, when applied correctly and as part of a OHCA bundle of care, has the potential to improve neurologically intact survival rates after cardiac arrest.

Mechanical CPR: A Critical Element in Any Cardiac Arrest Bundle of Care

Mechanical CPR devices are essential and critical to improving survival in any bundle of care for cardiac arrest, especially when prolonged CPR or CPR during transport are needed.

All SGAs aren’t equal; find out which might be avoided if the goal is to both maintain and allow for the generation of the negative intrathoracic pressure during the recoil phase of CPR.

Whether we speak about ACD+ITD CPR, ECMO, double sequential external defibrillation, or alternative drug therapies for patients in cardiac arrest, what remains clear is that none are effective without high-quality CPR.

The future of cardiac arrest resuscitation may provide an augmented intelligence-guided method of assessing a patient’s metabolism while guiding both compression and ventilation efforts during resuscitation.

Although administering epinephrine during cardiac arrest increases the chance of ROSC and survival to hospital discharge, it doesn’t increase neurologically intact survival. Should current dosing strategies continue or are there alternative, more optimal strategies?

Prehospital ECPR has the potential to significantly increase survival rates when incorporated into an optimal out-of-hospital cardiac arrest bundle of care.

An overview of hypothermia’s neuroprotective effects in adult patients with return of spontaneous circulation after cardiac arrest and the major studies that influenced the current guidelines for its clinical application.

When trained personnel are available, transesophageal echocardiographycan play an important role in the overall bundle of care by facilitating more accurate diagnosis of a number of disease states that can cause cardiac arrest.

A deliberate pre-arrival discussion is crucial for mental readiness when treating pediatric cardiac arrest and ultimately impacts their ability to initiate high-performance CPR in the presence of family and onlookers.

Alameda County (Calif.) EMS has made several sequential changes over the last decade to improve out-of-hospital cardiac arrest care. The bundle of care approach, instituted in conjunction with several different agencies, has resulted in significant improvements in cardiac arrest resuscitation strategies and outcomes.

The Rialto Fire Department bundle of care, known as the “Rialto resuscitation toolbox” was implemented on the vision that survival from cardiac arrest should be the rule, not the exception.

In 2015, the new EMS medical directors for Palm Beach County, Florida, instituted a bundle of care approach in an effort to improve disappointing resuscitation rates. Within three months, these rates improved dramatically, and in the ensuing years, have remained at more than double their prior level.

Although Whatcom County, Washington, is seeing improvements in cardiac arrest survival rates after implementing a bundle of care approach, the county still faces many challenges, including a population that’s growing at a rate of 10% a year.

When out-of-hospital cardiac arrests occur, the lack of pulsatile blood flow facilitates rapid clot formation. Although this coagulopathy is poorly understood, strong consideration should be given to administration of drug therapies that reduce the likelihood of hypercoagulation.

Hospitals that have adopted a system of care approach to resuscitation have demonstrated dramatic reductions in arrest incidence as well as improvements in survival-to-discharge for arrest victims.