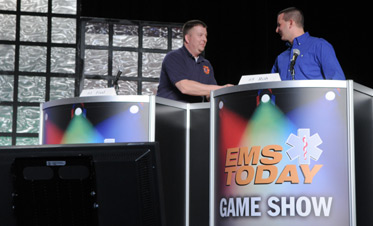 Paramedic Fred Wurster had a great time at the EMS Today Conference & Exposition. He always has a good time at the conference, but this year was full of suprises for Wurster.

Someone signed him up to compete in the”žEMS game show during the EMS Today opening ceremony. In fact, he didn’t even know he had been signed up until he got a phone call telling him when to show up. A surprise in itself, when he then figured out it was during the opening ceremony, his first reaction was, “Hold on, I’m not interested.”

However, he did participate and thoroughly enjoyed it. “It was flat-out fun,” says Wurster, who came in second. In addition to enjoying the game show, Wurster says the experience made him feel more involved in the conference.

His department, Malvern (Pa.) Fire Company, competed in the JEMS Games clinical competition, too. Though his team didn_t make the final five, Wurster won the JEMS Games raffle for a custom-tailored Class A uniform donated by Lighthouse Uniform Company. On his way to the stage, he thought, “What do I need another Class A uniform for?” Malvern Fire Company issues dress uniforms to its members.

As he walked back to his seat, he decided what he_d do. He had heard of Lighthouse_s Fallen EMT/Paramedic Dress Uniform Program, and the best use of his windfall was obvious. Ë™I wanted someone to benefit. Someone who really had a need,à“ he says. Lighthouse Uniform Company_s president Steve Cohen says this was the first time anyone has donated a uniform that they won.

Patterned after the company_s Fallen Firefighter Dress Uniform program, which has been around for about 15 years, the EMT/Paramedic program provides a free Class A uniform to the survivors of EMTs/paramedics killed in the line of duty. JEMS and the National EMS Memorial are partners in the program. Cohen says most”žEMS uniforms are T-shirts or golf shirts and trousers. Burying an EMT or paramedic in a Class A uniform is a sign of respect. Ë™It separates the secular from the sacred,à“ he says.

The idea of an”žEMS dress uniform in itself is new. It happened about four years ago when the NAEMT_s John Roquemore approached Cohen about creating a Class A uniform for”žEMS personnel. Cohen says this happened when, in the wake of the 9/11 attacks and as EMS was in its fourth decade of existence, the”žEMS community_s self-perception was beginning to change. More departments along the East Coast and in the South have adopted dress uniforms than in other parts of the country, but the idea is catching on.

Cohen says he_s not comfortable promoting the Fallen EMT/Paramedic program in his advertising and only has a rough idea of the number of times the company has donated uniforms. Ë™Maybe 100, based on the number of thank-you notes we_ve gotten,à“ is his best guess. His tailors will work around the clock when necessary to create the tailored uniform. As sad as the event is, his tailors take pride in their contribution to honor the fallen hero.

Read more about the JEMS Games and EMS Today Conference.