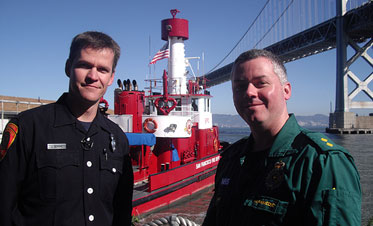 Frustrated with how he has to reply, Happy Medic explains, “To avoid litigation àš”

This conversation was common last week between two EMS bloggers —Medic999 (Mark Glencorse from the U.K.) andHappy Medic (Justin Schorr from San Francisco) — as they commenced “The Project,” an international exchange narrated via blogs and daily video journals.

For the first half of the trip, Medic999 travelled to San Francisco to work with Happy Medic for seven days at the San Francisco Fire Department.

“I got fantastic insight into the dual role of a paramedic/firefighter and the inherent difficulties that appear to come from working in emergency care in the U.S.,” Medic999 tells JEMS.

On hisblog atFireEMSblogs.com, he commented on one of the obvious differences in the U.S. and U.K. system — being “posted.”

“Its been a tiring day for me. No stand downs, no time on a station, no real relax time. Its not that it’s been particularly busy, but in the SFFD, if you are working on the Ambulance, you dont get returned to a station after you have taken a patient to a hospital, you just go straight back out on standby (or POST as they call it here).

“That would be unheard of for me in NEAS. I like my two protected stand downs each day for my meals. I like getting back on station every now and then so that I can do some admin work and catch up on some station duties. Its quite tiring going from standby to standby to standby for the day.”

Medic999″žhad an exit interview with the SFFD chief of EMS today, during which he was able to share his comments and observations. Happy Medic”žwill be summarizing the meeting”žin the next 24 hours on his blog,”žand he”žtells us that”žMedic999’s main focus was on sending”žfour firefighters in a $500,000 fire engine to do what U.K. medics do in a compact Ford, reducing the risks of traffic collisions as well as saving money.”ž

Another”žpredicted difference that Medic999 experienced: patients who don’t seek care for chronic problems because they don’t have insurance. “I know that Justin is used to it and knows no other way, but coming from the NHS, I found it just very, very wrong.”

But in one of their daily video journals, they say that many of their discussions weren’t about who was right and who was wrong, but more along the lines of asking each other “What do think of this?” or “What do you think of that?”

The two bloggers hope their experiences lead to some change toward improving patient care on both sides of the Atlantic.

“We intend this to be a timely review of two completely different methods of delivering quality prehospital care to our patients,” explains Medic999. “At this time of socialized versus privatized health-care discussions in the States, it seems to be happening at a perfect time.”

The whole week, the two were busy blogging, sending out Tweets, posting video journals and lots of photos, as well as participating inepisode 60 of EMS Garage(http://emsgarage.com) and Chronicles of EMS(http://chroniclesofems.com/).

But on his blog, Happy Medic noted that having a “free night” without the microphones and film crew allowed them to “100% honest” and really learn how EMS operates in each other’s countries.

Later this week, Happy Medic will land in the U.K., where he hopes to learn to swear like an Englishman.