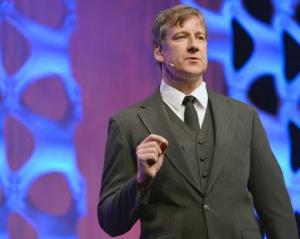 With a focus on the broad and significant changes throughout the history of its services, the 2013 JEMS EMS Today Conference & Exposition opening keynote presentations gave attendees a visual tour of their significant history with awards and visual storytelling.

In the heart of the nation’s capital, JEMS Editor-in-Chief A.J. Heightman, MPA, EMT-P, opened the EMS Today events with a presentation of awards, fanfare, and video and story-telling that highlighted the many varied positive contributions to EMS. As the first EMS Today exhibition and conference as part of the PennWell Corporation, attendees were welcomed by District of Columbia Fire and EMS Department Medical Director David A. Miramontes, MD, FACEP, and followed by a presentation of the colors and Pledge of Allegiance with the District of Columbia Fire and EMS Department Honor Guard and members of the department’s Emerald Society pipe band.

A salute to the members of Freedom House–both founding and current–was presented in a video presentation of the program’s beginning during our nation’s troubled and often violent struggle with racism. This was followed with a current look at a new struggle our country has in dealing with returning military combat veteran and suicide. A video presentation was introduced by Lieutenant Colonel Christopher Ford, (USAF), Regional Director West, and Chair of the Joint Chiefs of Staff Office for Warrior Support. Current and former military members in the audience were recognized and the audience was encouraged to attend the “Frontline on the Homefront: Helping Vetrans in Crisis” lectures offered at 8 a.m. on Friday and 1 p.m. on Saturday .

Senator Richard Blumenthal (D-CT) spoke words of gratitude to the audience and especially those EMS personnel from Newtown and the state of Connecticut. Extraordinary heroism, bravery and strength were shown by those who responded to the tragic shooting at Sandy Hook Elementary. Faced with the reality that there would be very little to do in terms of patient care, the EMS crews on the scene were immediately thrust into having to help parents immediately face the sudden and tragic news about their young children.

Noting that the level of care that day went beyond paramedicine and encompassed giving of their very hearts to grieving parents, Senator Blumenthal announced his introduction of a bill, the Mental Health First Aid Act, designed to provide aid for first responders who need it and also provide additional resources.

The culmination of the address came with a visual storytelling of the history of EMS by Dan Swayze, Dr.PH, MBA, MEMS. Swayze began his lessons dressed as a “snake oil” salesman extolling the virtues and surprising ingredients of Ayer’s Cherry Pectoral. Beginning with a look at when “emergency medicine” was first used in print, Swayze used period costumes and historical video to show some of the common and unique beginnings and advances of EMS from 1792—1970. Notable to the audience was the deployment of surgeons to the battlefield in “flying ambulances,” the development of direct auscultation, the “tobacco smoke enema” and official organization of the ambulance service in the U.S.

Moving the audience through World War I and highlighting the dedication and service of volunteers,  Swayze ended with the famous “Emergency!” opening, complete with “˜70s music and afro hair style. With the fun and surprises of the lessons, those attending were left with knowing that despite all the advances, and their somewhat strange beginnings, the one thing that has remained constant in EMS is the provider’s bravery, compassion and dedication to the people they service and the profession that are a part of.