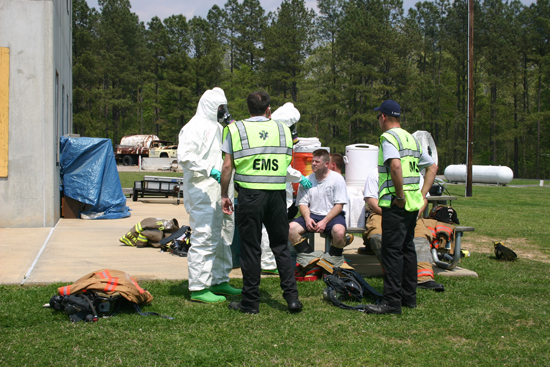 Medic 13, Engine 13 and Support Car 1301 are dispatched to a local supply company for a chemical spill and a 57-year-old male with trouble breathing. On arrival, the crews are greeted by company officials who report one of the employees was working alone in a small, poorly ventilated back room most of the morning. Another employee went out back to get something and found the man lying on the ground “breathing funny.” The crew is handed a material data safety sheet that notes the spilled chemical is 90% sulfuric acid.

A decontamination area is set up nearby and the engine company enters the building wearing full protective gear to extricate the patient. While decontaminating the patient, the engine crew tells the medics he was found next to a leaking 300-gallon tote.

After the patient is fully decontaminated, he’s taken to the ambulance. He’s awake and alert. His eyes are red and tearing, and he’s coughing, audibly wheezing and complaining of a sore throat. He states he was attempting to install a valve and piping to the tote when he noticed a leak. On attempting to repair the leak, he slipped, fell and was unable to get up.

Initial evaluation reveals a red, inflamed posterior pharynx but no stridor or swelling. Breath sounds include diffuse expiratory wheezing on auscultation. His vital signs include a heart rate of 110, a blood pressure of 150/92, a respiratory rate of 16 and a pulse oximetry reading of 96%. He has no burns and his only other injury is a deformed ankle.

The medics rapidly transport the patient to the nearest hospital. While en route, the patient is given oxygen via a nonrebreather mask and his ankle is splinted. IV access is established and the patient receives albuterol treatment. Prenotification is given to the hospital.

While in the ED, the patient develops stridor and worsening respiratory distress. Given concern for worsening airway edema, ED staff decide to intubate the patient for airway protection. He requires an awake fiberoptic intubation and is admitted to the ICU. He receives several bronchoscopies, which demonstrates improving airway edema. He’s extubated on day 3 but remains in the hospital for observation for several more days with no further stridor or shortness of breath. He’s eventually discharged with no further complications.

Chemical inhalation exposures are common, with the majority of acute inhalation injuries occurring in home and work environments.1 The majority of inhaled toxins cause nonspecific signs and symptoms, and identification of the specific agent based on presentation can be difficult. For prehospital care and treatment, identification of a specific toxin is unnecessary as therapy is generally supportive and based on clinical symptoms; however, be sure to record any information regarding the exposure that’s been provided to you. Determining the chemical name and time of exposure is helpful to physicians when determining expected clinical course and possible extent of injury.

The initial approach to all possible inhalation injuries is the same. Scene safety is crucial as providers can quickly become victims if the toxin is still present. Only properly trained rescuers should enter the scene, wearing protective clothing and self-contained breathing apparatus to limit exposure to potential poisons. The patient should be removed from the unsafe area, decontaminated if necessary, and any immediate life threats should be addressed.

Chemical irritants cause their effects by reacting with the mucous membranes of the eyes and respiratory tract. These agents are grouped by their water solubility. Highly water-soluble gases, like hydrochloric acid, sulfuric acid and ammonia have the greatest impact on the eyes and upper airways. Poorly water-soluble compounds, like phosgene gas, preferentially impact the lower airways.1

Exposure to highly water-soluble gases tends to cause immediate symptoms of a burning sensation in the upper airway and eyes, cough, and watering of the eyes. The noxious odors of these gases and the rapid onset of symptoms they cause generally limits significant exposure. Prolonged exposure to these gases can result in life-threatening laryngeal edema, laryngospasm, bronchospasm, or acute lung injury and non-cardiogenic pulmonary edema.2

Poorly water-soluble gases don’t irritate the mucous membranes and their odors are often more pleasant than the highly water-soluble gases. As there are generally no immediate symptoms, exposures may be prolonged, allowing the gas to reach the alveoli, causing irritation and injury to the lining of the lungs. Initial symptoms may be mild only to progress to overt respiratory failure and acute respiratory distress syndrome over the next 24 hours.1

In patients exposed to chemical irritants, evaluation of the airway is key. Visual inspection of the upper airway and assessment of oxygenation and ventilation by chest auscultation and pulse oximetry are necessary. Signs of upper airway dysfunction like hoarseness and stridor warrant direct visualization of the larynx and airway stabilization. After exposure, swelling may be immediate or delayed and a normal evaluation doesn’t preclude subsequent deterioration. These patients can rapidly deteriorate early and frequent reassessment should be performed.

Other treatments include supportive care with oxygen administration and copious irrigation of the eyes with water or saline. Bronchospasm in these patients may respond to inhaled beta agonists, but there’s no indication for steroids in these patients unless it’s part of treatment for an underlying comorbid condition like chronic obstructive pulmonary disease or asthma.2

Finally, chemical asphyxiants cause injury by preventing cells from properly utilizing oxygen. Common examples are carbon monoxide, hydrogen sulfide and cyanide. These act by inhibiting normal transport and utilization of oxygen at the cellular level. Signs and symptoms of inhaled chemical asphyxiants vary based on the amount and duration of the exposure.

Carbon monoxide often has an insidious onset of symptoms that include headache, chest pain and altered mental status, occasionally progressing to coma and death.3 Those exposed to low levels of cyanide typically complain of generalized fatigue, gastrointestinal upset, or neurologic symptoms including confusion, dizziness or headache. Those exposed to high concentrations of cyanide may have the classic presentation of coma, respiratory or cardiac arrest within minutes of exposure. Hydrogen sulfide at low concentrations has chemical irritant properties and results in upper airway irritation and burning but at high concentrations leads to respiratory arrest and death almost immediately.

The treatment for chemical asphyxiants somewhat varies based on the agent. All patients should be treated with 100% oxygen via face mask. The main treatment for carbon monoxide poisoning is high-flow oxygen. Patients who are pregnant, or who have signs of neurologic or cardiac toxicity, may be candidates for hyperbaric oxygen therapy.4 Patients suffering from severe cyanide poisoning, such as those who are unresponsive or in arrest, would benefit from rapid cyanide antidote therapy, usually with hydroxocobalamin (Cyanokit) when available.5

All patients suffering from chemical inhalation injuries should be transported for evaluation and further treatment. Burn center, trauma center and hyperbaric facility decisions should be guided by local standards of practice and protocols. Ensure patients are properly decontaminated to allow for safe transport, remembering that in certain exposures fumes may continue to off gas from the patient despite proper decontamination, making adequate ventilation in the patient compartment essential.

Toxic chemical inhalations are common and occur both at home and in the workplace. Scene safety should be the No. 1 priority to prevent rescuers from becoming victims themselves. The mainstay of treatment for these injuries is removing the patient from the exposure, maintaining the airway and providing supportive care including 100% oxygen.