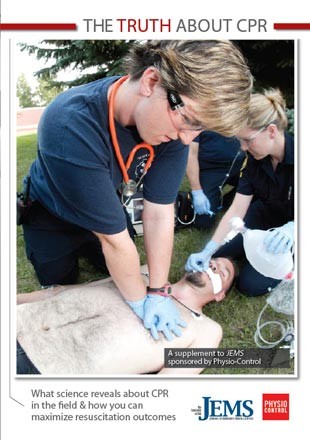 This supplement, sponsored by Physio-Control Inc., was developed to help you understand what factors contribute to “quality” CPR and how mechanical chest-compression devices can help you get to and maintain this goal.

Pump for the Pump

In a July JEMS.com article, “Danger in the Back of the Ambulance,” Las Vegas Fire and Rescue Medical Director David Slattery, MD, notes that many factors and practices increase the risk of injury and death to providers and patients. These include routine critical-care patient procedures, such as compressions and ventilation, performed by unrestrained crew members en route to the hospital.

In 2008, the American Heart Association (AHA) announced its support for “hands-only,” or compression-only, CPR for lay bystander use in witnessed, out-of-hospital cardiac arrest in adults.(1) What is compression-only CPR, and what happens if we don’t immediately ventilate adult victims of sudden cardiac arrest. Finally, what does this mean for EMS?

Just 5—15% of patients treated with standard CPR survive cardiac arrest, revealing a need for improved technique. To address this need, mechanical compression devices have become more prevalent and continue to evolve. Let’s take a look at the history of mechanical CPR devices and review their past and future in EMS.

Automated CPR devices are quickly gaining acceptance, especially since the 2005 American Heart Association (AHA) guidelines recognized that effective and uninterrupted cardiac compressions are critical to successful resuscitation.(1) These devices, however, do require a somewhat different approach in the use and evaluation of capnography in the cardiac arrest patient. In order to gain a better understanding of these differences, it’s important to first have an in-depth knowledge of the physiology of automated compressions and also of capnography.

We know that victims of cardiac arrest have a much higher chance of survival with bystander CPR.

Once the EMS community has taken ownership of resuscitation and developed a plan for where resuscitations are going to be worked to completion, the greatest task is determining a method by which the quality of compressions can be assured. These range from personnel-intense to technologically-intense methods; the risks and benefits of each are discussed below. Unfortunately, the research is not yet complete regarding which of these methods is the most effective, and what is available is somewhat conflicting.

CPR is one of the fundamental skills that EMS provides, yet most of us probably don’t know the quality of the CPR that our system provides. Yes, we may be able to say that we’ve trained to the latest guidelines and have complete buy-in from our practitioners but can we quantify the “boast” that we provide “great” CPR?

Survival after cardiac arrest is reported in various resources with markedly varied rates of success. Survival after prolonged CPR is even less common and more often associated with poor neurologic outcomes. There are few reports of repeated successful outcomes in patients with prolonged CPR that don’t involve unique circumstances, such as accidental hypothermia, massive pulmonary embolism and severe hyperkalemia.(1,2)

Graham says the eastbound lanes of University Boulevard have been shut down.

He says Montgomery County school officials are also at the scene.

March 2019, State of the Future of Resuscitation