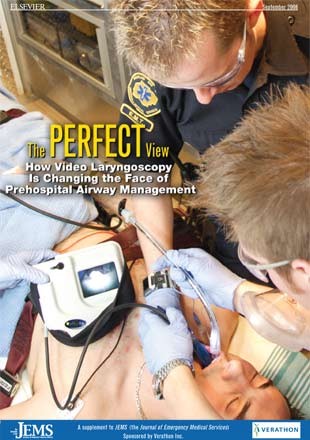 If you’ve ever had to do a belly flop on the ground to see the cords of a patient, you’ll appreciate video laryngoscopy. This supplement to September 2008 JEMS provides in-depth analysis and case studies on how this new technology is making its way into prehospital care. This supplement is sponsored by Verathon Inc.

I remember gowning up early in the morning and meeting with the assigned anesthesiologist to go over the OR schedule and being told whom I could and couldn’t intubate. If the patient had a jutting jaw, a large neck, a history of cervical fracture or poor teeth, I wasn’t allowed to intubate them and was required to just watch the anesthesiologist manage these “difficult” patients.

The funny thing is that many of the patients I was later called on to intubate in the street met one or more of those exclusionary criteria.

She never saw the truck. She had just dropped the kids off at school and was hoping to run some errands before she had to be at work. She edged her Escort out of the school parking lot to make a left turn onto the four-lane, trying to see around the truck parked on the northbound shoulder. She pulled out, and an F-150 impacted the driver’s door on the Escort. The collision was over in micro-seconds, with both vehicles coming to rest in the southbound lane.
Start the clock.

In 1829, the first known device for direct laryngoscopy was invented by British physician Benjamin Guy Babington. Later, the work of the widely recognized father of laryngology, Manuel Garcia, led to the first mirror laryngoscope prior to 1849, with a light source later introduced by Alfred Kirstein in 1895.1

Airway management is a basic and essential skill of anyone caring for an injured or a seriously ill patient. Although many patients can be managed with a non-invasive airway, many benefit from endotracheal intubation.

Much has been written about the hazards of endotracheal intubation, even in this latter patient group. Paralytics have been suggested, and utilized, by some ground and air EMS systems, but concern has arisen over the ability of crews to achieve effective intubation even with paralytics.

Up in the Air

It’s 1800 hrs, and the radio calls for the Trauma Team to report to the emergency department STAT. The information coming across the radio continues: “Medivac inbound. Two urgent surgicals, one intubated. Ten-minute ETA.” Although it may sound like the initial report of an inbound helicopter at any urban trauma center in the U.S., the reality is that minutes before, the flight medic rolled out of a Black Hawk helicopter in Iraq to meet a combat medic who had just pulled two of his fellow soldiers out of their Humvee.

Recently, I attended a seminar where the keynote speaker recommended endotracheal intubation be abandoned as a prehospital skill. A great deal of discussion ensued, mostly regarding the complications and legal liability of failed intubations and misplaced tubes, as well as the implication of new adjuncts to replace intubation.

Among all emergency care providers, competency in managing the airway is essential to managing patients who are acutely ill or injured. Generally, the situation is emotionally charged, the circumstance is urgent, and the stakes are high. The practitioner must know what to do and when to do it.

March 2019, State of the Future of Resuscitation