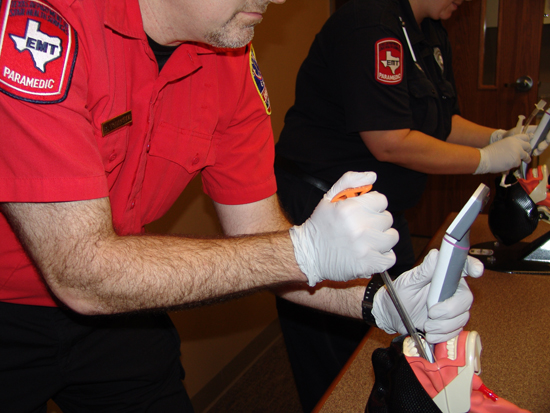 Video laryngoscopy is no longer a luxury. An increasing number of services are deploying the devices due to a closer scrutiny on prehospital airway management and the cost of video laryngoscopes becoming more affordable. But, with the variety of devices now available, how can you choose a model that meets your needs?

All video laryngoscopes aren’t the same–each comes with different strengths and weaknesses. Plus, some require providers to use a different technique during intubation than they would use with a traditional laryngoscope.

Individual providers should be prepared to use these devices in case of airway emergency.

Direct laryngoscopy involves the use of a device to align the curvature of a patient’s airway into a straight line so that you can see the glottis with your eye, and then pass an endotracheal (ET) tube by means of direct visualization. Traditional laryngoscopes don’t have a video camera; they consist of a handle, a battery power source and a blade that emits a light. The blades used in traditional laryngoscopes are straight (e.g., Miller) or curved (e.g., Macintosh), and we use a technique commonly referred to as “direct laryngoscopy” when performing an ET intubation. (See Figure 1, below.) A video laryngoscope is any laryngoscope with a video camera built in. The term “video laryngoscopy” describes the act of watching the video screen to pass the ET tube into the trachea.

Unlike traditional laryngoscopes where direct laryngoscopy is always the technique used, several techniques are available to select from when using video-enabled devices. 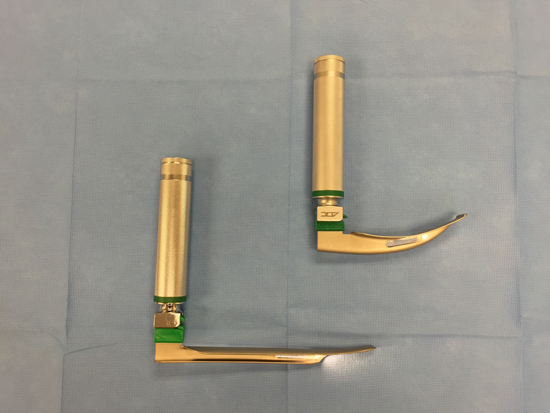 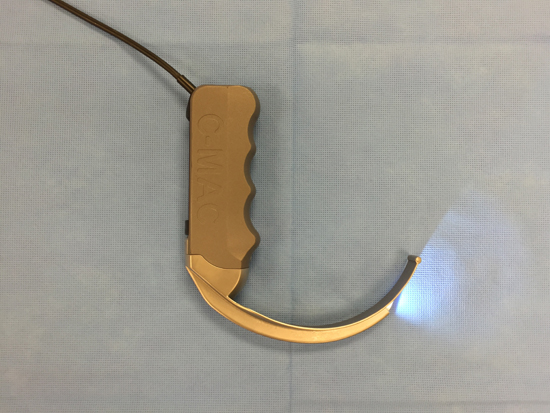 Direct laryngoscopy: During direct laryngoscopy, the provider is looking in the mouth while applying force to the laryngoscope handle to align the structures of the patient’s airway in order to see the glottis. This also creates a direct line for tube passage.

When a curved blade is used, the provider classically inserts the blade in a sweeping motion so as to control the tongue. Then, the blade is advanced while the provider progressively visualizes airway structures.

When the epiglottis is identified, the tip of the blade is passed anterior to it. This is done so that the device makes contact with the hyoepiglottic ligament. Application of traction to this ligament causes displacement of the epiglottis anteriorly, thus exposing the glottis. The tube, or an introducer (stylet or device to assist in tube positioning, movement and placement), can then be passed.

Straight blades are all used in a similar manner; however, a few key differences exist. Most providers will insert the blade far right of the tongue in a “paraglossal” position. Then, when the epiglottis is identified, the blade is used to elevate the epiglottis directly, as opposed to indirectly as with the curved blade.

Standard geometry video laryngoscopy: The term “video laryngoscopy” on its own doesn’t specify anything about what you’re doing with your hand and arm. In other words, the presence or absence of a camera doesn’t dictate how you wield the device in your hand–the shape of the blade does.

If blood or secretions obstruct the camera at any point during this sequence of events, the provider should revert to direct laryngoscopy and deploy suction quickly to prevent aspiration.

The great strength of these devices is that both direct and video laryngoscopy can take place using the same device. When providers conquer one technique the other is easy to learn.

When hyper-angulated geometry is utilized, the provider’s eyes are focused on the screen while the steep curvature of the blade is used to get around the structures of the airway. The blade is inserted in the midline and the provider uses a gentle rocking motion as opposed to the lifting motions used for direct laryngoscopy.

Attention is directed to the screen as soon as the device is inserted into the mouth. The provider doesn’t need to control the tongue. As soon as the glottis is visualized, attention is turned back to the mouth for tube insertion. Then, the tube is passed under video visualization.

Another difference is the nuance of tube delivery. Since the blade follows the normal curvature of the airway, the ET tube and stylet must also follow the same curvature (i.e., there’s no straight line to the glottis for which to pass the tube). This is usually accomplished with a rigid metal stylet that has a steep curve at the end similar to the devices themselves. (See Figure 3, below.)

Many providers run into trouble passing the ET tube at this point. This is due to the sharp curve of the stylet, which won’t allow the tube to be inserted easily into the trachea.

A tip for overcoming this is to “pop the top” (withdraw the stylet a few centimeters) of the stylet after the tip of the tube is seated at the vocal cords. If the stylet is withdrawn a couple of centimeters, the ET tube will more easily pass into the trachea. 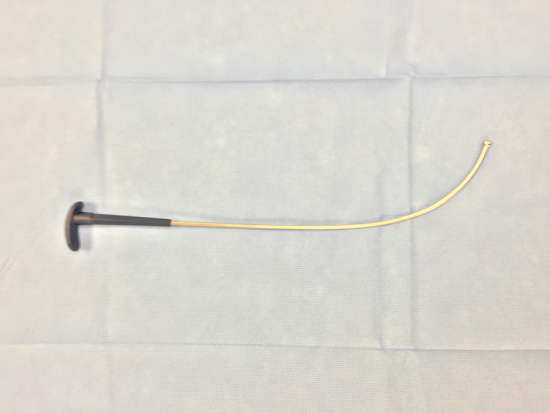 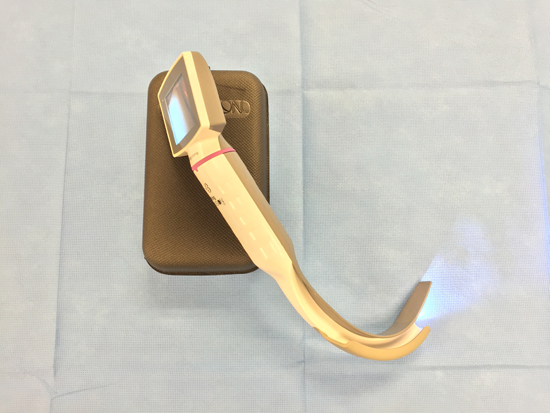 Another method for passing the tube with certain hyper-angulated devices is to use their integrated channel. (See Figure 4, above.) This obviates the need for a stylet entirely, because the channel is used to guide the tube to the glottic opening and designed so that the tube will exit at an angle amenable to passing into the trachea easily.

Occasionally, the tube can get caught outside of the glottic opening. In those cases, the provider can carefully twist the tube between their fingers so the distal tip rotates, allowing the tube to slide in easily.

While price is always a consideration, the decision to purchase a particular device should be based on function, proper training/orientation and ease of use. If your providers don’t feel comfortable with a device, they’ll often shy away from using it and returning to traditional devices or procedures.

When selecting a device, services should decide which technique–standard geometry video laryngoscopy and hyper-angulated video laryngoscopy–is most likely to be successful in their patient population. Only after this determination has been made should specific devices be considered.

When considering standard geometry video laryngoscopy, there are very clear benefits. The blades are similar to the traditional laryngoscopes that EMS providers have been using to intubate since they learned the skill. Therefore, they’re familiar with the mechanics associated with the blades and the learning curve may be less steep. 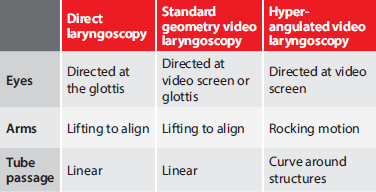 Furthermore, if a provider is using a standard geometry system and blood or secretions conquer the camera, they have the immediate ability to revert to direct laryngoscopy, clear the fluids and continue. Many providers also feel tube passage can be accomplished faster and less cumbersomely with standard geometry video laryngoscopy.

Hyper-angulated geometry video laryngoscopy systems are also attractive. Providers can generally get a fantastic view with ease. Very little “lifting force,” if any, is required. In the authors’ opinion, these are easier to use in close quarters or when patients are on the ground.

After an EMS system has evaluated and chosen a video laryngoscopy system for purchase, it’s critical field providers are properly educated and have adequate practice time with the devices and the techniques.

Using a video laryngoscope is unlike using a traditional laryngoscope–it’s indeed a different skillset. Therefore, EMS providers must have a thorough understanding of the terminology and techniques involved when incorporating a video laryngoscope device into practice. Although these devices have some very clear benefits, if they’re used inappropriately, intubation success rates will suffer.