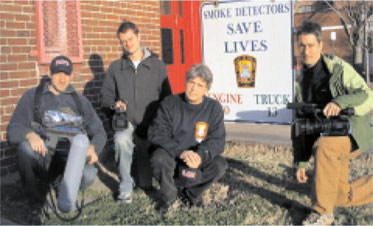 The Battalion, fromàœLos Angeles based Tule Fog Productions, is a Web-based series crafted to take viewers inside the vehicles, work days, living quarters and lives of emergency responders. In a manner never shown before, it features fast-paced filming, flash views of station life, responses, fire attacks, rescues and medical runs, and adrenalin-pumping music that draws you in like a magnet.

This series puts you in the front seat of emergency apparatus, weaving through traffic and treating oblivious drivers to blasts of air horns and sirens as the crews attempt to reach the scene in an expedient but safe manner. Its unique filming style takes you on a no-holds-barred tour of the action-packed lives of emergency responders, showing off-duty personnel arriving on their motorcycles and gearing up for their shift. But the series offers much more, focusing on the fast and slow times, funny and sad calls, and the close-knit working environment where crews spend as much time together on the job as they do with their own family.

This fast moving, entertaining and educational series is separated into two parts: The first part, àTwenty-Four Hours with the San Francisco Fire Department,à“ follows the men and women of the fire department as they respond to fires, accidents and medical assists. The second part, àWomen on the Watch,à“ focuses on female firefighters and their increasing presence in the heavily male-dominated field of firefighting. A second season of the series is in the works and will expand to a city and fire department on the East Coast.

Executive Producer David Furtado conceived the series in 2003 and was granted exclusive access to film the men and women of the San Francisco Fire Department. His unique approach to cinematography allows emergency responders and the public a true inside view of the daily emergency-service lifestyle. Young viewers will not only enjoy the fast-paced approach offered byàœTheBattalion.tv series, but they’ll also learn about the excitement and camaraderie offered byàœEMS and the fire service. This series may be just the spark many agencies need to improve their recruitment efforts.

In just 22 weeks, the Tule Fog Productions team has developed 18 riveting and action-packed episodes, all of which are available for downloading or viewing on their Web site,àœwww.thebattalion.tv andàœJEMS.com. The stylized webisodes can even be downloaded to your iPod or phone for viewing during downtime from calls.

This series sets a new standard for multimedia programming, and Tule Fog Productions plans on featuring more EMS-focused episodes in the future.

For more information, or to view or download webisodes, visitàœwww.thebattalion.tv.