Powered cots have been shown to reduce spinal compression forces in emergency service professionals by as much as 50%(1). However, the EMS work environment often results in cot loading and unloading scenarios plagued by off-axis, uneven approach conditions. This, coupled with patient weight, can make the job of the EMS professional very difficult even with a powered cot, and it can result in poor ergonomics and high lumbar and joint stresses.(1) At some angles, the cot may not be able to load into the fastener at all. The purpose of this study was to evaluate the angles at which two commercially- available emergency cots would no longer load into the fastener. 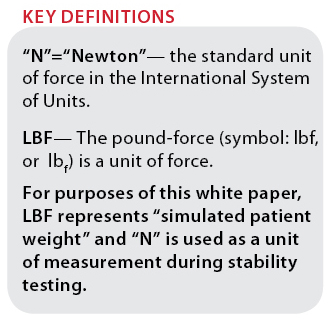 Two emergency cots were loaded and unloaded into a simulated ambulance in this study. The FERNO POWER X1â„¢ Ambulance Cot (Wilmington, OH) and Stryker® Power-PROâ„¢ XT (Portage, MI) cot were kept on the horizontal, and one corner of a simulated ambulance was positioned at a maximum height per the ambulance floor height standard.(2)

Both cots unloaded and loaded when the cot and fastener were parallel to the horizontal (orientation a) at both simulated patient weights.

In the (b) orientation, the maximum angle at which the Power-PRO XT could be unloaded or loaded was -6.0 degrees at both simulated patient weights. The POWER X1 unloaded and loaded up to -12.0 degrees without weight and up to -10.7 degrees with weight, representing up to a 100% increase in flexibility.

In the (e) orientation, the maximum angle at which the Power-PRO XT could be unloaded or loaded was 3.0 degrees at both simulated patient weights. The POWER X1 unloaded and loaded up to 12.0 degrees at both simulated weights, representing a 300% increase in flexibility. The maximum approach angle capability of the Power-PRO XT cot and Power-LOAD fastener was found to be load dependent (p < 0.05) and ranged from 16 degrees at full capacity to 20 degrees with an unloaded cot. In this scenario, the Stryker Power-PRO XT would not load into the Power-LOAD without lift assistance. The POWER X1 and PRO F1 were capable of 55 degrees of off-axis approach angle regardless of the load on the patient surface (Figure 2).

If an emergency cot and ambulance floor are at different angles with respect to one another, such as is often the case when parked on a hill, driveway, or curb, or when the EMS professional approaches the back of the ambulance at a slightly off-axis angle, then the unloading and loading dynamics of the cot are changed. In some cases, the cot will not load at all, even with assistance from the EMS professional.