At the 2012 National Association of EMS Physicians Annual Meeting, researchers presented the National Characteristics of Emergency Medical Services Responses in the United States. It was the first-of-its-kind analysis of trends in “out-of-hospital emergency medical services” since the Affordable Care Act became law.

The final report provided a baseline regarding the “breadth and diversity of EMS demand and care in the United States,” and has laid some groundwork for the industry to take a look at processes, procedures and equipment used in the course of a call and what can be done to better serve the communities and patients as the U.S. population demographics begin to shift.

Still More Changes
According to the study, no analysis has yet taken place to observe demographic and regional trends in pre-hospital care, leaving both patients and medics with a gap of information that could assist in changing how the EMS industry supports communities.

“A factor limiting the advancement of EMS is the paucity of scientific evidence supporting EMS care and practices,” was cited by researchers as a factor in the production of the paper.

Challenging the study has been a dynamic shift in older population demographics.
Based on numbers specific to 2010, the mean age for the entire U.S., of a person receiving care was 56 years of age. Nearly 40 percent of the overall patients noted Medicare as their primary insurer.

The aging population is what is becoming more and more challenging to many in the EMS industry because of patient mobility factors.

Jason Wender, global marketing director for Ferno, says patient transportation can begin to have an adverse effect on medics that don’t have the proper equipment to care for the elderly.

“Transporting a patient from their home down or up stairs, into an ambulance and ultimately to the hospital requires specialized tools and care in order to protect the medic as well as the patient,” says Wender.

In 2010, the top three locations where EMS was dispatched to was home/residence (55.9%), healthcare facility (16.7%) and a public building (10.7%) each location has additional challenges. For Ferno, the solution to transporting a patient in tight spaces and stairs has been the company’s EZ-glide with PowerTraxx. Ferno’s development of the product came out of personal discussions with medics who asked for a product that could transport patients more quickly and efficiently, through barriers without a burden being place on the patient or the medic.

Outgrowing the Demographic
In 2014, the Wall Street Journal disclosed a U.S. demographic that had become even more skewed toward an aging population, one that had dramatically increased in just a few years. 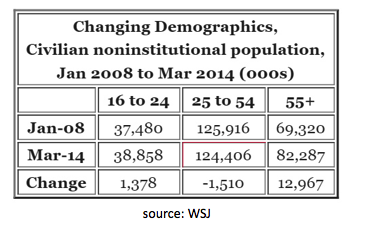 How will the changing demographic affect care? Transport remains one of the most challenging tasks of emergency care. The constant lifting can play a role in a medic’s personal health and can even end his or her career.  Transport to a health care facility is high according to the report. All regions showed high numbers in transport, with the Midwest topping out at just over 76 percent of patients being transported, while the Northeast accounted for the low end of 59 percent.

Agencies are now taking a hard look at purchasing equipment not just for the patient, but also for the user. Hydraulics to manage the cot as well as power trains that allow rescue chairs to go up and down stairs with little pressure on the medic’s back is becoming the norm, not the exception.  As demographics’ shift, the market is expected to keep up, with some equipment providers already leading the way.