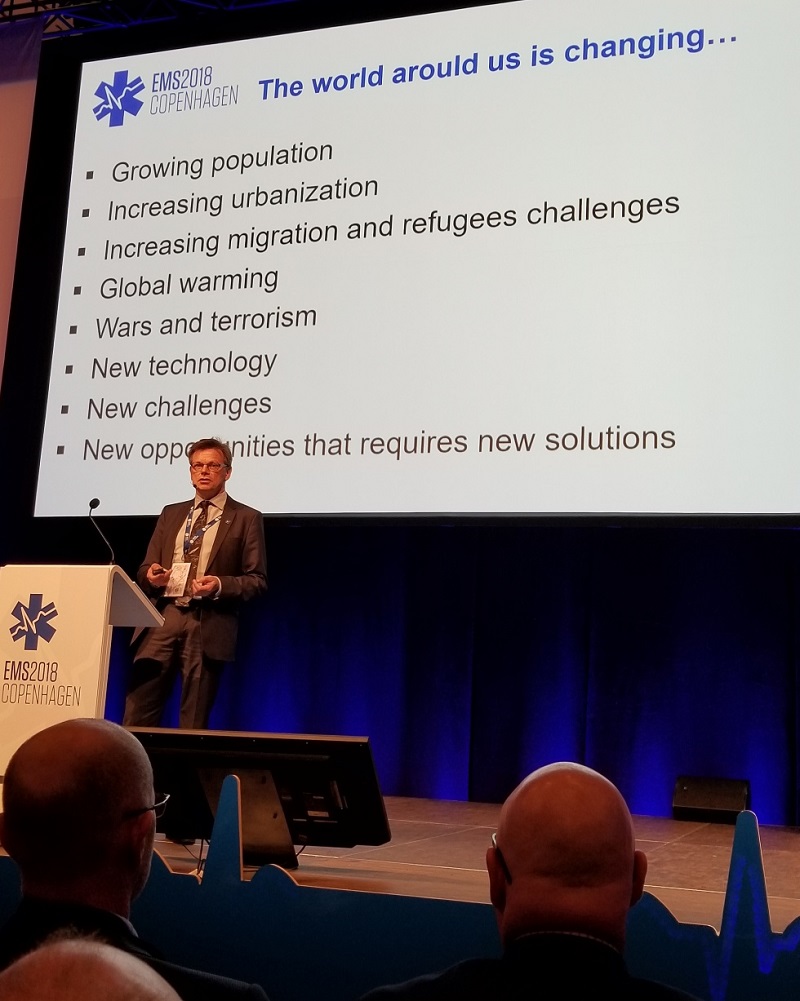 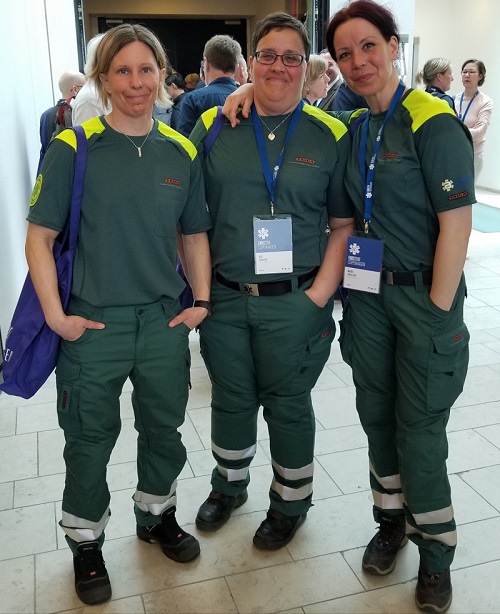 Some of the attendees from 40 countries attending EMS2018 in Copenhagen. From left: Johanna Jakobsson-Ahl, Asa Hansson, and Malin Marklund of the Swedish Ambulance Union.

Anders Hvid from Denmark was the keynote speaker at the opening of European EMS Congress in Copenhagen Denmark on Monday.

Anders Hvid has 15+ years’ experience in tech-scouting, business development and strategy consulting in IT. He is bridging the gap between technology, business and society.

He co-founded Dare Disrupt with a mission to empower the minds of a million people and to bring the knowledge of the opportunities arising from exponential technologies to a much broader audience.

Together with his partner Jannick B. Pedersen, he published the book Face the Future and has presented more than 100 keynotes over the last two years in more than 17 countries.

He’s one of the most requested speakers and commentators in the media and press in Denmark on the topic of emerging technology, disruption and the future of business and society.

Hvid is one of the first and among the very few Danes, who have participated in Graduate Studies Program at Singularity University, where only a few visionary students from around the world get the opportunity to explore and develop new technologies and apply these to help us to solve major global challenges.

He co-founded the Danish alumni group and later became the Danish ambassador for Singularity University.

Today he still serves as faculty for Singularity University, is an appointed member of the Siri-commission, headed by member of the Danish parliament Ida Auken, and an external group of experts advising the Minister of Education Merete Riisager.

He is former member of Research, Innovation and Science High Level Expert Group for the European Commission to support commissioner Carlos Moedas.

An implantable computer chip that will soon be implanted under the skin of patients to assess and transmit vital signs and ECGs to medical providers.’

A.J. Heightman CoChaired a robust panel of international experts and visionaries in this session on ….

A.J. with him colleague and EMS Today Conference lecturer Dr. NG YihYng (Dr. “YY as he is known to the JEMS Team From the Singapore Civil Defense Fore. Dr. YY presented at EMS Today 2018 in Charlotte on their highly effective motorcycle fire and EMS response Motorcyce team in Singapore.

A graduate of Walt stories program the University of Pittsburgh who is now off working on a phD in the United Kingdom.

A.J. Heightman and Lars Rasmussen Co-Chaired a panel discussion on Military EMS Monday afternoon at EMS2018 in Copenhagen. Rasmussen is Professor of Emergency Medicine and Consultant in Anaesthesia in the Department of Anaesthesia, Center of Head and Orthopaedics, Rigshospitalet, University of Copenhagen, Denmark. His Ph.D. his been heavily involved in dealing with resuscitation and trauma.

Chris Wright from the United Kingdom spoke on “¦…

Wrights served as Regimental Medical Officer to the Parachute Regiment on operations in Northern Ireland and Kabul. He trained in Emergency Medicine and gained a post as a consultant at St Mary’s hospital in London.

For the past four years he has been the UK Defence Medical Services senior advisor for Pre-Hospital Emergency Care, responsible for everything from battlefield first aid training through to the deployment of high level combat casualty retrieval teams.

Whitmore has been involved with the London Ambulance Service (LAS) since 1980 where he has held various senior appointments within LAS Education and Training Department.

He was head of Education and Development for West Country Ambulance Services NHS Trust from 2000 to 2002 and returned to LAS in 2002.

He is Co-Vice Chairman of the Faculty of Pre-Hospital Care, Royal College of Surgeons Edinburgh.

He has wide ranging operational experience, covering terrorist incidents, rail disasters, major fires and civil disturbances. He has seen significant developments in the ambulance profession and had the privilege of being a part of some of those developments.

François Braun from France spoke on “¦.

As a physician in the Hospital of Verdun in France, Braun contributed to the development of the emergency response in rural areas and became one of the leaders of the regional organization of emergency medicine.

He was deeply involved with a French rescue group during the earthquake in Iran in 1990 and during the Balkan war where he practiced disaster medicine on the field.

As President of Samu-Urgences de France he contributes to develop emergency and disaster medicine.

Speaker #2 – Military doctor from the UK (Chris Wright) who has been on more than 15 combat operations tours in battlefield conditions.

Each of the three panelists presented the different ways they treat, equip and deploy their military emergency medics.