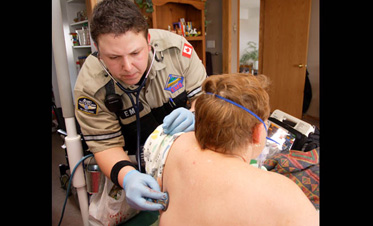 The township EMS agency NEVER called us. They hated our guts. First of all, we were an ALS service, and they weren’t. Second, we were a private company contracted by the city, so as far as they were concerned, we were the Whore of Babylon in their midst. One time, we were dispatched to an MCI involving a school bus on the border between the city and the township. Children were critically injured, and every bit of help was needed. After the incident, the township chief called our director to complain that our units intruded on his territory. Go figure.

When we arrived at the middle-class ranch house, we were greeted at the door by an older woman. “My son is really sick. He needs to go to the hospital,” she told us as she led us to a bedroom. There, in the glow from the nightstand’s light, lay her son, a middle-aged man, with the covers up to his chin. Our questions about what was bothering him elicited numerous vague responses. He apparently suffered from various illnesses, fevers, vapors, ague, imbalances of the humors and existential angst. But one thing was certain: He wanted to go to the hospital.

The poor fellow could barely manage to drag himself over to our cot. The moans of anguish and anomie still echo in my memory as we, with heartless disregard for his suffering and weltschmerz, declined to lift him from his sick bed and carry him to the stretcher.

We loaded him into the back of Medic 85 and got a set of vitals. His moaning increased, and his complaints became more focused — nausea, weakness, anorexia, sick for days.

“Sir, if that’s the case, you’re probably dehydrated and we’ll need to start an IV,” I said. “Tony, do we have any fourteens?”

The patient asked, “You mean a needle? A really big needle?” We couldn’t help but notice the barely concealed pleasure and anticipation this thought brought him. We glanced at each other, puzzled. Our patient then began to complain of severe shortness of breath, gasping between breaths.

“Tony, it looks like we might have to tube him if his breathing gets any worse,” I said.

“You mean intubate me?” The man asked, a glimmer in his eye. Tony rolled his eyes and heaved a sigh as only Tony could.

The only remaining question was how to pay the township back for their treachery!