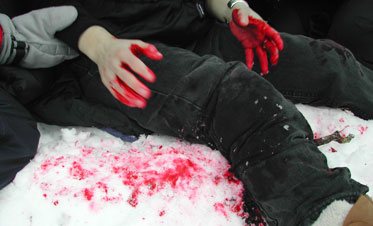 With blood oozing between the hiker’s fingers and running down her arm, it was obvious she had a cut on her hand. She elevated her injured right hand while applying pressure with her left hand.

I asked, “How did you cut your hand?”

“While whittling the end of a walking stick,” she replied.

After I mentioned I knew first aid, she gladly exposed her injured hand. A 4-cm laceration ran diagonally across her palm. Blood oozed from the wound, and I could see fat globules and muscle fascia.

“You must have had a sharp knife,” I observed.

“Yep, it was a new, multipurpose tool I just got as a birthday present,” she replied.

Wounds like this one are rarely life-threatening in the backcountry. Most of the wounds I’ve assessed and treated have been to the hands, feet or face, as well as to the lower legs and lower arms depending on the mechanism. Common mechanisms include:

In an urban setting, many patients that suffer minor wounds will self-treat and/or self-evacuate to an urgent care center. When you’re acting as the trip medic in a wilderness situation, such as a canoe trip, off-shore sailing trip or hunting expedition, other participants will look to you for wound-care evaluation and treatment. When assessing and treating wounds, remember to control the bleeding, prevent infection, and monitor the patient to determine if they need to evacuate.

Control Bleeding
For my patient with the cut on her hand, it was easy to identify the site of the bleeding. I encouraged her to apply continuous direct pressure and to elevate her hand. Ten to 15 minutes of direct pressure will control bleeding from most of the wounds you’re likely to encounter in the backcountry.

It’s not always easy to identify the source of the bleeding because of multiple layers, protective clothing and safety equipment. Once, I watched a skier lose control and ski into the woods. When we arrived, she was sitting in the snow and complaining of several injuries. She had blood on both her hands, and it wasn’t easy to identify the source. Calming the patient and a rapid trauma exam helped us determine several bleeding locations. Even though the temperature was near 0 degrees Fahrenheit, we had to temporarily remove some of her clothing to ensure we had found all the bleeding sources.

Students in wilderness medicine classes routinely ask me about including a tourniquet in their backcountry first aid kit for bleeding control. Although tourniquets are popular in Westerns and adventure movies, the mechanisms that recreationists commonly encounter rarely cause uncontrollable extremity bleeding. However, a recent JEMS article, “Return of the Tourniquets,” discussed how this intervention is being introduced back into EMS and may be worth another look for wilderness care.

Prevent Infection
After you control the bleeding, your next wound-care concern is preventing infection. At home, patients have quick access to soap, running water and hospital evaluation. If you’re hours or days from hospital care, wound cleaning takes on increased importance.

Do you remember applying a swab of bacteria to an agar plate in high school biology? With each passing day you monitored the exponential growth of bacteria in the Petri dish. The same growth can occur in a wound that isn’t properly cleaned.

To minimize the risk of wound infection:

In the urban context, it makes sense to stabilize an impaled object in place and transport because of the relative ease and comfort. However, in the wilderness when evacuation may take hours or even days, leaving non life-threatening impaled objects in place is rarely practical because of the increased risk of infection, difficulty of stabilization and consequence to patient safe transport.

Impaled objects are rarely dramatic items, such as axes, ski poles or tree limbs. Instead commonly impaled objects include splinters, cactus needles, fish hooks and ticks. Unless an impaled object is in the eye or would cause further damage, consider removal to prevent infection when care and evacuation is prolonged.

Monitor for Necessary Evacuation
On the last night of our sea kayaking trip, a sudden storm roared across Lake Superior toward our beach campsite. As I scrambled to secure equipment, a stick plunged into the skin of my right arch, just above my sandal. After causing a 1-inch abrasion, the sharp stick broke off under my skin. After a few futile attempts to pull it out, I realized it was there until I could see a doctor the next day. I washed the area around the wound as best I could, but a piece of wood was stuck. By the next morning, the skin around the stick was swollen and warm. By lunch, I was limping because any pressure on the wound caused shooting pain. By late afternoon when I presented at the clinic, a yellowish green puss oozed from the wound when any pressure was applied.

In the urban context, keeping a wound clean and promoting healing is relatively easy. In the backcountry, activity from continued use, peripheral vasoconstriction caused by cold challenge and lack of clean protective clothing can compromise wound healing.

In conclusion, determine the need for evacuation from a wound based on these criteria:

Many wounds can be prevented with such simple safety procedures as wearing shoes that cover the toes and using knives carefully. If a trip member sustains a wound, apply direct pressure to the specific site of the bleeding, clean around and in the wound, monitor for infection and evacuate to definitive care if indicated.