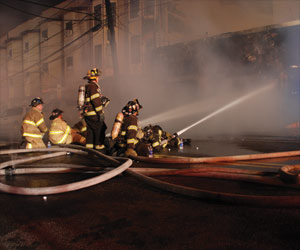 Unfortunately, little information is available on the ill effects of exposure to fireground toxins on firefighters and exposed occupants.(4—5) A limited but evolving body of literature is starting to link toxic smoke exposure and long-term morbidity and mortality, such as one Florida study that identified an increased incidence of bladder cancers in male firefighters.(6)

It has long been known that there are numerous toxic substances on the fireground and in smoke.(7) However, until the past decade, we haven’t had any reliable way of detecting these toxins and providing effective treatment–just oxygen in most cases. Certainly environmental gas meters and other atmospheric monitors have been an important step in improving fireground safety by identifying certain toxins on scene. However, two fairly recent developments have dramatically changed the way we look at fireground and smoke hazards.

The first of these is the ability to measure biological exposure to carbon monoxide (CO) with either an exhaled CO monitor or pulse CO-oximetry. The other is the ability to treat cyanide poisoning with the antidote hydroxocobalamin (Cyanokit). Now, we can both detect and treat exposures earlier and hopefully improve outcomes of those exposed. Also, we can now mitigate many risks to firefighters and other emergency responders through use of formalized and evidence-based on-scene rehabilitation programs.

Chemistry of CO
During a fire, the materials that burn are largely organic and subsequently release carbon dioxide and water during the process of combustion. CO almost always also develops because combustion is rarely complete. CO competes with oxygen for oxygen-binding sites on hemoglobin and has a much greater affinity (200—250 times) for these binding sites than oxygen, displacing previously bound oxygen. The binding of CO to hemoglobin results in the formation of carboxyhemoglobin (COHb), which doesn’t transport oxygen.

In addition to hemoglobin, CO also binds to other iron-containing proteins in the body, including the enzyme cytochrome oxidase. This is the same enzyme system to which the toxin cyanide binds, explaining why the signs and symptoms of CO and cyanide poisoning are similar. It’s now known that many of the toxic effects of CO are more due to the effects on cytochrome oxidase (and other iron-containing proteins) rather than the binding to hemoglobin.

Typically, a phase of decreased oxygen content in the blood (hypoxemia) follows CO exposure. The effects of CO-mediated hypoxemia are dependent on any underlying disease that might be present, such as emphysema or heart disease.(8) These periods of hypoxemia and re-oxygenation often result in the formation of dangerous chemicals called free radicals, which causes oxidative stress, as well as cell and tissue damage.(9,10)

Oxidative stress has been associated with the development of many diseases, including atherosclerosis, Parkinson’s disease and Alzheimer’s disease.(11) Thus, exposure to CO (either acute or chronic) may be a risk factor for the development of cardiovascular and neurological diseases.

Patients with moderate to severe CO poisoning are at increased risk of developing cardiovascular complications.(12) These complications occur in all age groups regardless of the patient’s underlying health status. In a 2005 study, researchers in Minneapolis evaluated 230 victims of CO poisoning and found that myocardial injury was common in moderate to severe CO poisoning. These same 230 patients were followed for an average of 7.6 years after their exposure. Initially, 85 (37%) patients had an associated myocardial injury, such as ECG changes and elevated cardiac biomarkers, associated with the poisoning. Interestingly, of the 85 who had myocardial injury, 32 (38%) eventually died during the study. In contrast, only 22 (15%) of the 145 patients who did not sustain myocardial injury eventually died.13

Although most of the studies to date have addressed immediate deaths from CO poisoning, other research is starting to demonstrate that long-term mortality may be related to both acute and chronic CO exposure. In a Swedish study, researchers concluded that the incidence of cardiovascular disease and death in nonsmokers was related to COHb levels and suggested that measurement of COHb levels should be a part of risk screening for cardiovascular disease.(14)

CO poisoning can interrupt oxygen delivery to the brain, causing brain hypoxia. This is later followed by oxidative stress that can damage sensitive brain tissue. The detrimental effects of hypoxia and oxidative stress can be either temporary or permanent.

Acute and chronic neurological problems have been documented following CO poisoning. These occur regardless of whether the CO exposure was acute or chronic. It’s believed that the mechanism of brain injuries is related to the production of free radicals–primarily nitric oxide (NO). Normally found in the body, NO causes vasodilatation and can injure or kill cells through oxidative stress. NO levels are increased with CO exposure. In fact, most of the signs and symptoms associated with CO poisoning are primarily due to the vasodilatory effects of NO.

Numerous neurological findings reported following CO exposure are primarily affective and cognitive. In a study of 127 CO-poisoned patients, researchers found depression and anxiety were common, and they were often permanent.(15) Delayed neurologic syndrome (DNS) has been identified as a complication of acute and chronic CO poisoning.(16) In DNS, recovery from the initial CO poisoning is seemingly apparent, only to have the patient develop behavioral and neurological deterioration, often permanent, anywhere from two to 40 days later. Other neurologic complications, such as Parkinsonism (findings that mimic Parkinson’s disease), have been reported with DNS.(17)

Cyanide
Cyanide (CN) is a highly toxic substance that results from the combustion of materials often found on fire scenes, including plastics, rubber and silk. CN affects an enzyme in cells that uses oxygen for energy production. The signs and symptoms of CN poisoning can be similar to those of CO poisoning, and we now know the mechanisms of action are similar. However, unlike CO, the effects of CN occur rapidly and are more pronounced.

Other Toxins
Smoke is a complex mixture of airborne solid and liquid particulates and gases that develop when materials undergo vaporization or thermal decomposition.18 This vaporization and decomposition can liberate various toxins, many of which are detailed in Table 1. Although the effect of these agents is unclear, exposure to some (e.g., aromatic hydrocarbons) has been linked to cancer development.

Prevention as a Solution
The solution to mitigating the toxic effects of smoke and fireground risks, and thus many of the occupational risks of firefighting, is through prevention and treatment. This can be achieved through several efforts, including use of safe firefighting tactics (including safe overhaul) that mitigate unnecessary risks and exposures, and use of proper protective equipment (PPE) and clothing.

Use of PPE is very important because many fire departments don’t require their members to be on SCBA during interior overhaul and data shows they get significant CO exposure in this phase of operations without SCBA. This is an important intervention to reduce firefighter exposure to CO so all the chronic downstream health risks can be attenuated. (19)

Considerable research over the past two decades has been devoted to strategies to improve the health and safety of firefighters. The National Fire Protection Association (NFPA) recognized this and published the NFPA 1584 Standard on the Rehabilitation Process for Members During Emergency Operations and Training Exercises, which established guidelines and recommendations for formalized firefighter rehabilitation programs.(20)

Rehabilitation is an organized intervention designed to mitigate the effects of physical, physiological and emotional stress of firefighting in order to sustain a member’s ability to work, improve performance and decrease the likelihood of on-scene injury or death. Because many firefighter injuries and deaths are preventable, rehab should be an integral part of the incident management system for the fireground and training exercises. Rehabilitation should commence any time emergency or training operations pose a risk of department members exceeding a safe level of mental or physical endurance.

A key component of firefighter rehab is medical monitoring of all personnel. EMS providers promptly evaluate firefighters for worrisome signs and symptoms as they enter the rehab area, placing particular emphasis on evaluating hydration status and the effects of heat or cold stress. In some situations, various vital signs are taken as well as pulse oximetry readings. Medical personnel should be alert for signs and symptoms that may indicate exposure to toxic gases. Screening for CO with either exhaled CO detectors or pulse CO-oximetry is recommended. Those with elevated COHb levels shouldn’t be allowed to return to the fire until the levels have returned to normal. Early treatment of CO poisoning may mitigate some of the untoward long-term effects detailed above.

Following rest and medical assessment, personnel who have returned to their baseline physical status can be allowed to return to active firefighting. Those who don’t must remain in the rehab area. Even after being released from rehab, firefighters should be continually monitored for potential problems.

The role of EMS providers in firefighter rehab is different than standard EMS practices. Often, medical monitoring will simply be an evaluation of the firefighter and no further care provided. In other instances, firefighters maybe kept in the rehab area longer than normal while hydration status is restored and vital signs return to normal. If an affected firefighter doesn’t respond as expected, they should be moved from the medical monitoring area to the emergency treatment area. In some cases, transport to the emergency department may be necessary.

Conclusion
The health and safety of firefighters is a paramount concern. The time to reevaluate and change firefighting tactics and practices to minimize dangers and mitigate risks is now. This is best achieved through prevention strategies, including formalized rehab practices. Also, evaluation for exposure to treatable toxins, especially CO and CN, can save lives–both immediately and in the future. The fire and EMS professions must come together to achieve these goals.

Disclosure: The author has reported receiving honoraria and/or research support, either directly or indirectly, from Masimo.

This article originally appeared in the October 2010 JEMS supplement The Silent Killer as “Where There’s Smoke, There’s Far More than Fire?”