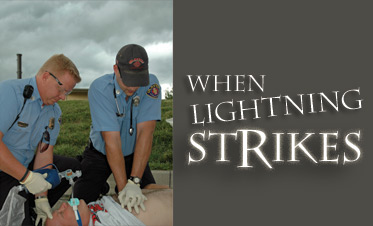 Myth: There’s no danger from lightning until the rain starts.”ž

Fact: Lightning often precedes the storm by up to 10 miles. A reasonable guideline is the 30-30 rule, by which you count the seconds between the flash and the thunder. If the time span is less than 30 seconds, seek shelter. Additionally, wait a full 30 minutes from last lightning flash to resume outdoor activities.

Lightning is a fascinating and deadly natural occurrence. As emergency responders, we need to know about the incidence and mortality rates, mechanisms, and treatment of lightning strikes. Let’s review some common myths about lightning strikes to reveal facts that can inform our approach to these scenes and care for these patients.

What Are the Odds?

The National Weather Service estimates that lightning strikes the earth about 25 million times a year. The odds of getting struck by lightning are 576,000 to 1. The odds of dying from a lightning strike are 2,320,000 to 1. These odds are like winning the World Series of Poker–good if you’re dealt the Jack of Spades for the inside straight on your last card, but not quite as good if you raise your nine iron to the sky to celebrate an amazing chip to the green in the middle of a lightning storm in the Midwest.

Despite these odds, lightning remains one of the top three environmental causes of death (after temperature extremes), exceeding fatalities caused by tornadoes, hurricanes and earthquakes.

Most lightning is caused by electrical redistribution of particles within clouds. This distribution is often due to warm air rising and interacting with ice and water droplets. The effect of this interaction is a difference in charge between the top of the cloud, the bottom of the cloud and the ground below. As a result, an electrostatic charge is released toward the ground. This negative charge will be attracted to the rising positive charge emerging from tall objects on the ground, be they a weather vane, tree or golf club. As these two charges meet, a powerful electrical current begins flowing back toward the cloud, or less commonly, toward the ground at an astonishing 60,000 miles a second.

It’s this incredible speed and resulting short duration of contact with the current that’s thought to cause low mortality rates in victims of lightning strikes. Although the current may be as high as 30,000 amperes with hundreds of millions of volts, the contact is limited to 0.0001à0.001 seconds.

Myth: A lightning strike victim remains electrically charged and is unsafe to approach.

Fact: Unlike a person lying on high voltage lines, lightning strike victims carry no charge. This misconception can have tragic results when it delays resuscitation efforts.

Understanding how and where lightning hits and travels is critical to not only recognizing lightning strikes and the severity of resulting injuries but also treating patients in a safe manner.

Direct strike (3—5%) occurs when a person is struck directly and often has devastating consequences.

Side splash (30%) occurs when the electrical charge arcs from the object struck to the person standing nearby.

Ground current (40—50%) occurs when the lightning current spreads through the ground, affecting people at a distance from the initial strike. Lightning has a “search radius” of 50 yards around the area of the initial strike, often leaving the victims well removed from the point of initial impact. Not surprisingly, it’s this phenomenon that has the potential for the most victims. Of note, hundreds of cases each year involve injury indoors while on a landline phone or in contact with a metal pipe or fixture. Ground current enters the pipes and wires outside the structure and travels to the unsuspecting victim.

Contact injury (1—2%) occurs when a person is in direct contact with another object that’s charged by the lightning.

Blunt trauma occurs through multiple mechanisms. To start, it’s often the result of the severe muscle contractions that occur when skeletal muscle contracts against a large electrical stimulus. Remember how the frog leg used to jump in high school biology class when a slight current was applied? Imagine the nerve excitation and effects on the muscles if a million volts surged through them. Further, tremendous concussive forces occur as the lightning superheats and expands the surrounding air prior to rapid cooling. The result is an explosion/implosion with sufficient force to cause significant blunt trauma to such major organ systems as the liver, spleen and brain. Witnesses have reported victims being thrown up to 40 feet from their point of origin.

Myth: People struck by lightning are “crispy critters.” Or, when struck, the victim will burst into flames and crumble into a pile of ash.

Fact: The duration of the contact is so short that the current usually “flashes over” the victim. Multiple case studies have described victims with their clothes blown off and no apparent signs of injury. Less than one-third of victims have any visible burns.

Although the bulk of the energy flashes over the patient, enough energy passes through their body to have an impact on their organ systems. Electricity will choose the path of least resistance. In the body, this path is the nerves and blood vessels. As a result, there can often be a transient, or even a long-term, disruption and short circuit of the body’s electrical systems.

Cardiac impact: Although mortality in lightning strikes is less than 10%, the most common immediate cause of death is cardiac arrest. It seems intuitive that the electrical impulse would induce a ventricular arrhythmia. A fair amount of data suggests that a prolonged QT is often present in the victim. This raises the question of a Toursades de Pointes type of picture, particularly if the strike is at just the right point on the QRS complex.

The most common presenting rhythm, however, is asystole. It’s theorized that this rhythm is caused by electrical interruption to the central cardiac centers in the brain and to the pacemakers along the cardiac control paths. Traditional ACLS wisdom suggests that asystole is likely a confirmation of death with little chance of salvage. What’s unique with lightning strikes is the rapid recovery to a normal sinus rhythm with aggressive resuscitation efforts. The impact on our traditional multiple-casualty field triage protocols seems clear. In cases of multiple lightning strike victims (often the effects of ground current), we’ll need to attend to the pulseless and apneic with the same, or greater, urgency than we would to the screaming leg injury. This goes against the “black tag and move on” approach that many of us learned in EMT school.

Respiratory impact: The other critical system affected is the respiratory system. Although vulnerable to blunt trauma, the lungs tend to be spared the direct effects of lightning due to their poor conductive properties. The respiratory center located in the brain’s medullary center, however, is quite vulnerable. The immediate effect is a temporary “stunning” of the medulla and a transient respiratory arrest, leaving the victim subject to hypoxic injury or death if respiratory interventions are not immediately initiated. Respiratory arrest may last for hours after the return of spontaneous circulation, requiring intubation and a ventilator after aggressive respiratory support during extraction from the scene.

Skin & vascular impact: One of the typical effects of current traveling down the vasculature is vessel instability. This presents clinically as cold, pulseless and mottled extremities, which, in the unresponsive patient, can be easily confused with a prolonged downtime. The same can be said for the presence of fixed and dilated pupils. This is often caused by a stunned autonomic nervous system. Like the effects on the medulla, this is usually a spontaneously reversible event over a few hours and shouldn’t deter resuscitation efforts.

When presented with an unresponsive subject lying in the middle of a golf course (naked, with shreds of clothes scattered about) one of the key clues to the etiology of events can be found on the skin. Although discreet entry/exit wounds (like in high voltage injuries) are rare, it’s the presentation of reddish-brown, feathery skin lesions, or Lichtenberg figures, that are pathognomatic for lightning strike (see photo, p. 38). Although wearing metal probably doesn’t increase the risk of being struck, the effects of super heating a piece of jewelry or clothing can cause partial and full thickness burns to skin.

Fact: The Empire State Building and the Sears Tower get hit hundreds of time per year.

The first order of business for the responding ambulance crew is scene safety. A timely response to the scene can put the caregiver at risk for another strike. Rapid evacuation to the vehicle or another safe structure may be required prior to treatment.

As with everything we do in the field, ABCs are the priority with special consideration for aggressive resuscitation of the asystolic or respiratory arrest patient. All patients should have cardiac monitoring due to concerns for ongoing arrhythmia. With the high risk of blunt trauma, C-spine immobilization, boarding and disciplined splinting to stabilize long bone injuries should be initiated when appropriate. Flooding the patient with large amounts of saline is controversial and probably is not indicated due to the risk of cerebral edema.

Some 74% of survivors of lightning injuries sustain long-term or permanent injuries. More than half will have ruptured ear drums and many will suffer significant eye injury, most typically resulting in cataracts that occur up to several years after the event. The most debilitating sequela, however, tend to be neurological. Survivors can be plagued with permanent neurocognitive changes, including personality changes, learning disabilities, seizures and sleep disorders. Chronic pain syndromes, thought to be caused by damage to peripheral nerves, are a common and severe source of debilitation. As a result of the above, all victims of lightning strikes should be transported to the hospital to allow evaluation and appropriate follow-up arrangements.

Although a relatively rare phenomenon, lightning strikes pose a unique diagnostic and treatment challenge to even the most seasoned EMS professional. With the increasing popularity of outdoor sports, the reported incidence is on the rise. Aggressive interventions, whether you’re on the job or just at the right place at the right time on your day off, can save a life.

Ben Usatch,MD, FAAEM, NREMT-P, has been involved in EMS for more than 25 years. He serves as the medical director for community- and hospital-based units in the Philadelphia area. He works as an attending physician and the EMS director at the Lankenau Hospital in Wynnewood, Pa. Contact him at docrags@drexel.edu.

To learn how weather information services can help you better determine where lightning might strike and when the storm has passed, read “Before Lightning Strikes.”