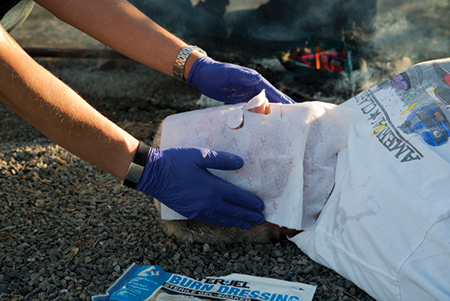 Medic 18 is called to stand by at the scene of a fire. While en route the crew is told that the the fire was a result of an explosion in the kitchen of a local fast food restaurant. There are no reported injuries.

On arrival the medics are directed to a safe area to set up the rehab sector. They’re advised the fire appears to have been from a gas leak. Just as the ambulance comes to a stop, a man comes running from the deli across the street. He’s screaming “Help me!” while shaking and holding his hands in the air. What remains of his beard is still smoldering. The medics immediately assist him to the ground and begin their assessment.

On initial assessment, the patient denies loss of consciousness, neck pain or trouble breathing. He’s alert and oriented times 4 (i.e., person, place, time and event). A rapid trauma assessment reveals that his lungs are currently clear, his entire face and top of his head are covered in second-degree burns with a combination of open and closed blisters. His eyebrows are singed and his beard is burned down to stubble on his chin and cheeks. Both arms have second-degree burns from the elbows to the hands, but his chest appears to have been spared. The medics estimate that his burns cover approximately 18% of his body.

Upon further questioning, the patient states he saw a spark from the outlet while plugging in a refrigerator in the kitchen. Then there was huge explosion that knocked him across the room. He ran cold tap water over his burns, and then ran across the street for help. The patient rates his pain as a 10 out of 10. 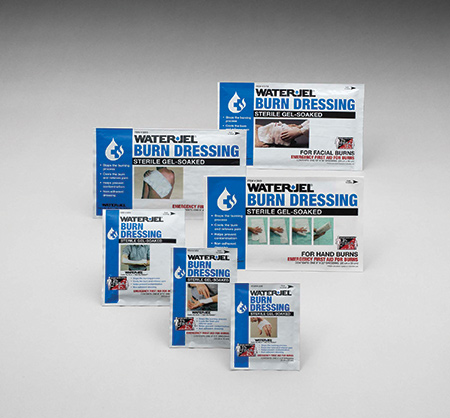 The patient’s blood pressure is 138/90, pulse is 120, respiration rate is 20 and his oxygen saturation is 96%.While preparing to gain vascular access, the medics open their burn care pack that contains packages of Water-Jel-sterile burn dressings premoistened with water-soluble gel. They quickly apply the Water-Jel Face Mask, which is designed specifically for the face and has precut eye, nose and mouth holes. A non-rebreather mask is applied and high-flow oxygen is delivered at 12 Lpm.

The patient’s arms are draped with Water-Jel dressings and the patient is quickly moved to the ambulance. Once there, an IV is established and fluid resuscitation is begun.

When reassessing your interventions, including the Water-Jel application, the patient downgrades his pain rating from a 10 to an eight. He accepts the offer of morphine and is given 5 mg, which further reduces his pain to a 6.

Upon arrival the medics provide a quick report while the patient is moved to an ED gurney. At this point the patient has no additional complaints. However, due to the mechanism of injury, the patient undergoes a respiratory evaluation and CT scan of his head, neck and abdomen, which reveals no other injuries.

The ED team removes the Water-Jel dressings and assesses the burns. The face appears to have been well covered and there’s no burn progression noted. Evaluation of the arms, however, indicates that the areas where the burn dressings hadn’t fully covered the burn area have continued to be hot and the blisters are growing in size, which may have also influenced the degree of pain relief reported by the patient.

The burns are dressed with antibiotic-impregnated dressings and the patient is admitted to the hospital for care. His wife says she hardly recognizes him now because he had always worn a beard from the time they first met.

Over the course of the next several days, the patient has his burns debrided and wrapped. The plastic surgeons are amazed at the differences in healing between the areas covered by Water-Jel compared to those that weren’t. The patient doesn’t require skin grafting and is discharged after seven days. 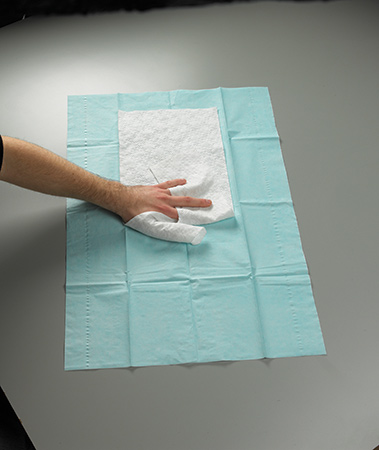 How best to treat burns in the acute prehospital setting continues to be debated. For many years EMS was told to cover burns with gauze and pour sterile water over them for several minutes, cooling the burns by water evaporation, then cover the patient in a sterile burn sheet. That practice led to the concern that overzealous cooling with water could result in hypothermia in the burn victim.

Hypothermia is associated with an increased mortality and morbidity thought to be related to how lowered temperature interferes with the body’s clotting mechanisms and response to stress. Burn centers then changed their recommendations to dry dressings covered in a clean sheet. Unfortunately, that practice doesn’t cool the burn at all and may in fact increase the burn area by trapping heat.

Premoistened burn dressings such as Water-Jel are widely used around the world and in industrial complexes where workers are at risk of sustaining burns. Industrial facilities often have burn stations stocked with these dressings for first aid.

Although the concern for hypothermia continues, it can be controlled with judicious use of premoistened dressings. These dressings cool by convection, not by evaporation, and the heat is transferred from the burn into the gel, reducing the burn temperature in a controlled way, and allowing the heat energy to be released into the ambient air. With that in mind, Water-Jel is sometimes limited by local protocol to no more than 25% of the body surface. For burns greater than 25%, the manufacturer recommends Water-Jel be applied to the most critical burns first, such as those on the face and hands, then other areas up to any protocol limit. Beyond that, traditional dry dressings may be applied.

Another concern with failing to cool a burn is pain control. Cooling with running water is the most effective non-narcotic means of reducing pain. However, outside of the fact that a considerable quantity of clean water will be required, this can only be done for a limited amount of time before the patient needs to be transported to the hospital. The application of a premoistened dressing designed specifically to draw heat out of the burn and maintain a sterile environment will provide better pain reduction than a dry dressing.

In the ED, dressings will need to be removed to allow full assessment of the patient. This often results in significant pain in part from the removal of tissue that has adhered to the dressing. A moist burn dressing avoids this by being non-adherent.

Immediate cooling of burns reduces further burning and relieves pain. Whether or not an EMS agency has the availability of a burn center, they should meet with their medical director and healthcare leaders to review the options for prehospital burn management. Armed with proper education, training and patient care protocols, it’s possible to effectively cool burns, avoid hypothermia and provide pain reduction to patients with burns.

Disclosure: Keith Wesley has no financial interest in Water-Jel.