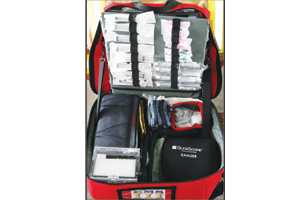 Recently, I attended a seminar where the keynote speaker recommended endotracheal intubation be abandoned as a prehospital skill. A great deal of discussion ensued, mostly regarding the complications and legal liability of failed intubations and misplaced tubes, as well as the implication of new adjuncts to replace intubation.

Although I believe we’ve seen great improvements in airway adjuncts in the past several years, they’ve all had limitations and complications, and oral tracheal intubation has remained the “gold standard” for airway control and maintenance. Thus, rather than discontinue this life-saving procedure, we should attempt to figure out why it’s problematic in the prehospital setting and develop ways to improve its success.

As an EMS supervisor, part of my job is to administer our agency’s quality assurance program. Because our department uses rapid sequence induction (RSI), failure to secure an airway isn’t an option, and this intervention is monitored closely. In November 2006, my colleagues and I noticed an increase in unsuccessful intubations and a series of multiple intubation attempts. We monitored this for several months to ensure we were seeing an actual trend and not just a “bad month.” In February 2007, we determined it was a trend, and we set out to resolve the problem.

Not only is it imperative to secure an airway, it must be accomplished with a minimal number of attempts. A 2004 study showed an increase in complications following the second attempt at oral tracheal intubation.1 The study reported that hypoxemia occurred in only 11.8% of patients intubated within two attempts; however, hypoxemia was seen in 70% of patients on whom more than two attempts were made. Aspiration went from 0.8% within two attempts to 13% after more than two attempts, and bradycardia occurred in only 1.6% of twice-attempted intubation patients versus 21% for patients undergoing more attempts.

Our department was on track with these complications, and we needed a solution.

A New Way
In March 2007, several members of Martin County (Fla.) Fire Rescue, attended the EMS Today conference, where we were introduced to the GlideScope® Ranger. I arranged to have a representative present the Ranger to our department for a more in-depth evaluation.

A regional sales rep brought a unit to our training office and we had several of our rescue lieutenants (EMS supervisors) and paramedics use the unit to intubate our training mannequins. Intubation with the Ranger is slightly different than what paramedics are used to. So there was a small learning curve, but after 10—15 minutes of practice, everyone was comfortable with the equipment and able to intubate effortlessly. We easily intubated the difficult airway head and a mannequin with a cervical collar in place. In all cases, we were able to intubate on the first attempt and in an acceptable timeframe.

Because it was the middle of our budget year, it took some juggling of funds, but by fall 2007 we were able to purchase four Rangers. We weren’t able to purchase enough units for every ALS truck, so we decided to place one on each of the rescue lieutenant’s vehicles and one on our medical helicopter. Rescue lieutenants and flight medics are the only ones who perform RSI and they respond to most of the critical calls. With this strategy, we felt the Rangers would be quickly available anywhere in the county.

Case Study #1
Early one morning, one of our stations responded to a motor vehicle crash (MVC) in which a motorcycle struck a pickup truck broadside at a high speed. The driver of the motorcycle was lying approximately 75 feet from the point of impact and was unconscious and unresponsive. No helmet had been worn (they’re optional in Florida) at the time of the accident.

Physical assessment revealed unequal pupils and blood in the patient’s ears, nose and mouth. He had shallow respirations at four to six a minute and uneven chest rise. Examination of the extremities revealed bilateral femur fractures. His other vital signs were: Pulse 130, weak and regular; blood pressure 88/54; and SaO2 86.

Initial treatment included manual C-spine stabilization while crew members attempted to assist ventilations with bag-mask ventilations (BMV). Because his jaw was clenched, the ventilations were ineffective. It was obvious that if the patient was to have any chance of survival, an airway needed to be secured quickly. Due to the severe head injury and the clenched jaw, few options were available.

The crew decided to perform RSI and orally intubate the patient. The patient was sedated and paralyzed, and oral tracheal intubation was attempted. The first attempt was unsuccessful, and the patient’s pulse dropped to 52. The patient was then ventilated by BMV, bringing his pulse back to 120.

A rescue lieutenant arrived on scene with a video laryngoscope, and the patient was successfully intubated on the first attempt. The patient was air lifted to the local trauma center, and after several months of recovery, he was released to a rehabilitation facility to undergo physical therapy. A full recovery is expected.

Case Study #2
Whenever a difficult airway is mentioned, we naturally think of trauma patients, but some of the most challenging airway problems can arise from medical calls. Recently, one of our rescue crews responded to an “unknown medical” in a mobile home park. On arrival, they found an extremely obese woman in her 50s in the back bedroom of a small mobile home and in severe respiratory distress. An initial exam revealed her skin to be pale and diaphoretic, and rales were noted in all lung fields. Her pulse was 140, BP was 74/48, SaO2 was 54%, and respirations were six a minute, with cyanosis noted around her lips.

CPAP was attempted but discontinued within a few minutes because the patient was too weak and tired. Respirations were assisted with BMV while an IV was established. Lasix 80 mg was administered, but morphine and nitroglycerine were withheld due to her hypotension.

A second IV was established, and a dopamine drip was started with the hope of increasing her BP enough to allow for the administration of additional medications.

The patient’s condition continued to deteriorate, and an attempt at nasal intubation proved unsuccessful. A supervisor dispatched on the call decided, in conjunction with the scene paramedic, to use RSI and attempt to orally intubate the patient. The crews realized it would be a difficult intubation, but the patient needed an airway, and with video laryngoscopy available, team members felt confident they would be successful. The patient was paralyzed and successfully intubated using the Ranger on the first attempt.

Other Cases & impressions
Our crews have also used the video laryngoscope successfully to clear airway obstructions in two children. Visualization was quick, and the design of the blade allowed more room in the mouth to maneuver the Magill forceps.

In instances when a supervisor arrives on scene where a patient has already been intubated, but the crew is unsure if the placement is correct, we have used the Ranger to quickly and easily verify tube placement by inserting the blade/camera into the airway. Within a few seconds, several providers at once can confirm placement on the video screen. Our flight medics also frequently use this technique to verify tube placement before loading intubated patients into the helicopter.

Many of our paramedics have said they also prefer the Ranger over traditional methods because they don’t have to put their face down by the patient’s. This decreases the possibility of bloodborne exposure from secretions or blood coughed up by a trauma patient.

After we put the Rangers in service, we took them to local emergency departments for demonstrations. The physicians were impressed, and on several subsequent occasions, called for a rescue lieutenant when they had a difficult intubation and an anesthesiologist wasn’t available.

During the past nine months, we’ve used video laryngoscopy on 72 prehospital patients and successfully intubated all but one. When I performed a quality assurance review on the failed intubation, I determined it was most likely due to an inexperienced operator error. After that case, our rescue lieutenants provided refresher training for all crews, and the problem hasn’t happened since.

Getting Started
I can’t stress enough the importance of training for anyone who may have the opportunity to use this equipment. The procedure isn’t difficult; it’s just different than the way paramedics were originally trained to intubate with a traditional laryngoscope. The design and shape of the blades actually make intubation easier and require much less force to visualize the vocal cords. However, if you aren’t comfortable with the equipment, you can feel awkward during your initial attempts.

I recently had a discussion with a physician who was concerned that paramedics may become too reliant on the Ranger and felt it could reduce their ability to intubate the “traditional way” if the device was unavailable. I definitely understand this concern, especially if every ALS unit carries a video laryngoscope, but in our service we expect paramedics to attempt to secure the airway with their available equipment and not wait for a rescue lieutenant to arrive with a Ranger.

To date, we haven’t had an intubation attempt delayed and the paramedics haven’t exhibited any decline in traditional laryngoscopy skills. A strong quality assurance program should keep this from happening.

Although the controversy over prehospital oral tracheal intubation still rages, I believe the endotracheal tube is the best and most secure airway available. I’m not recommending that every ALS unit carry a video laryngoscope, but I strongly urge departments, especially those using RSI, to find a way–through grants, private donations or fundraisers–to obtain units and place them strategically within their service area. The results of your efforts, in terms of improved patient care, will be priceless.

Disclosure: The author has reported no conflicts of interest.