This six-month observational study was conducted by the San Antonio Fire Department and the Department of Emergency Health Sciences, University of Texas Health Science Center at San Antonio. All BLS and ALS providers received training in the application of an impedance threshold device (ITD) attached to a face mask and head strap.

This device, which is FDA approved and marketed as the ResQGARD from Advanced Circulatory, has been proven to improve blood pressure in awake and spontaneously breathing hypotensive patients.

The authors of this study attempted to determine whether it could be easily integrated into their BLS and ALS protocols for the treatment of patients in shock. Vital signs were obtained before and after application of the device. Providers weren’t required to apply the ITD before deciding to initiate IV fluids, nor were they restricted in the volume of fluids to administer.

Two hundred patients were enrolled in the study. Overall, 67% demonstrated a significant rise in blood pressure, and 82% of patients with hypotension due to trauma had a significant improvement in blood pressure. The initial mean arterial pressure (MAP) of 60 rose to 76 after ITD application. Also, 78% of the patients self-reported easy to moderate comfort when wearing the device. 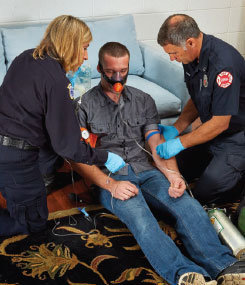 Before I comment on this study, let’s review the definition of hypotension. Significant hypotension, or shock, is present when there’s insufficient perfusion of vital organs–the two most important being the brain and heart. Traditionally, we assume hypotension is present when the systolic blood pressure is less than 90 mmHg. But a more accurate calculation takes into consideration both the systolic and diastolic blood pressure since perfusion of the brain occurs during systole and perfusion of the coronaries occurs during diastole. This is referred to as the MAP and is equal to [(2 x diastolic)+systolic]/3.

A MAP of 60 is generally the lowest level that continues to provide sufficient perfusion and a “normal” MAP is 70—100.

Now, let’s address the potential role of the ResQGARD ITD in hypotension. This ITD functions by decreasing the intrathoracic pressure during inspiration. This negative pressure promotes the return of blood to the right atria from the superior and inferior vena cava. In a sense, the patient is drawing blood from the periphery to boost the central circulatory volume. The advantage of this function in the trauma patient is that whole blood is the volume source instead of normal saline that dilutes the patient’s blood volume.

But why use the ITD when you can start an IV? The literature continues to support the minimal value of isotonic IV fluids for patients with traumatic hypotension. Additionally, the role of fluids in other types of hypotension isn’t entirely clear as it relates to the prehospital arena. This study also indicates the ITD can’t cause over-resuscitation. There’s only so much blood that can be returned and the body will adjust the effect once the MAP normalizes.

For spontaneously breathing patients, the ResQGARD may very well be the most appropriate initial treatment for hypotension and one that can be easily applied by both BLS and ALS providers.

This is an incredible device for treating patients in shock. It’s noninvasive, easy to use and lifesaving. The time factor for IV/interosseous is taken out of the equation, and it can be used by BLS providers. The study shows great results in patient outcomes. As Doc stated, science continues to show minimal value of isotonic IV solutions in hypotension. The science behind the ResQGARD is valid.

I recently had a personal experience with a family member in a hospital setting who became hypotensive, and clearly showed every sign of classic shock: altered mental status, rapid heart rate, hypotension, diaphoresis, nausea, etc. The staff missed all of the “in your face” signs and symptoms. They would only give intermittent boluses of fluid for fear of over resuscitating him and causing pulmonary edema.

EMS providers, using proper critical thinking, can easily identify patients in shock. Adding the ResQGARD to our tools is a great move forward.