Uncontrolled hemorrhage is the largest cause of preventable mortality in trauma. When extremity bleeding is uncontrolled many, if not most EMS agencies, have now recognized the benefit of using tourniquets.

Using direct pressure and tourniquets on extremity bleeding is relatively straightforward for EMS providers. The most challenging wounds however, are those in the junctional areas-the groin and the axilla-where tourniquets can’t be used. The bleeding in these locations is often deeper and maintaining adequate external pressure can be difficult or impossible.2

The U.S. military has been teaching wound packing with standard gauze and hemostatic dressings to its medics for years.3 Like the transition of tourniquets from military to civilian EMS, these skills are now becoming adopted by tactical EMS teams as well as field EMTs and paramedics. Wound packing can be utilized in concert with tourniquet use or as a solo hemorrhage management technique.

Shortly after the tragedy at Sandy Hook Elementary in December 2012, a joint committee was convened by the American College of Surgeons (ACS) and attended by many other agencies to develop a national policy to improve survivability from mass casualty incidents (MCI) and active shooter events.

To date, the committee has published four documents that include recommendations for EMS, public safety and the community’s response to MCIs and active shooters.

One of these documents, The Hartford Consensus III: Implementation of bleeding control, recommends that direct pressure be used primarily for hemorrhage control, whenever possible.3 When direct pressure is ineffective or impractical, the application of a hemostatic agent to junctional wounds is suggested. The evidence-based guideline specifically suggests that the hemostatic agent be “delivered in a gauze format that supports wound packing.”2

Although physicians and military medics have long been trained in wound packing techniques, traditional EMS training programs haven’t typically included this skill, because it’s not currently included in the national scope of practice published by the National Highway Traffic Safety Administration/Office of EMS (NHTSA/OEMS). 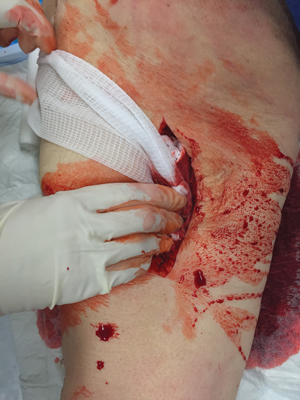 Pack deeply into the wound, making sure to put the gauze
into direct contact with the bleeding vessel at the base of the wound.

However, given that wound packing has been recommended by the Hartford Consensus and the recent evidence supports this procedure, many training programs have begun including the procedure in their curricula.

In fact, NHTSA/OEMS has convened an expert panel to review and update the national scope of practice and wound packing is on the agenda to be considered. If approved, this skill will then be integrated uniformly into standard EMS training curricula.

When the ACS hemorrhage control guideline was published, there was little human evidence to support the recommendation for hemostatic gauze. The recommendation was primarily based on animal experiments in a laboratory. However, physicians have been using wound packing as a hemostatic technique for centuries, so the empirical evidence for the technique is strong.

In 2015, the largest case series of prehospital hemostatic dressing use was published; it included 122 patients treated by the Israel Defense Forces Medical Corps. Study authors concluded that “hemostatic dressings seem to be an effective tool for junctional hemorrhage control.”4

Incidentally, only about a quarter of the wounds packed were junctional injuries, the remainder were wounds of the extremities, back and head. Nonetheless, the authors found that there was a high rate of successful hemorrhage control (approximately 90%) in all locations where hemostatic gauze
was used.4

Simply stated, if there’s no (or only minimal) bleeding, the wound doesn’t need packing. Wounds of the extremities and junctional areas are amenable to packing. If a tourniquet is initially placed on an extremity wound, it may later be replaced with a pressure dressing or with packing, which may be more comfortable for the patient and provide for a moderate amount of distal circulation.

Direct pressure will usually suffice for bleeding neck wounds. Wounds of the neck aren’t generally packed because of the risk for airway compromise.

Although the bleeding from a back wound will typically not be profuse and may be controlled with a simple pressure dressing, in the Israeli experience, wounds of the back were packed successfully. 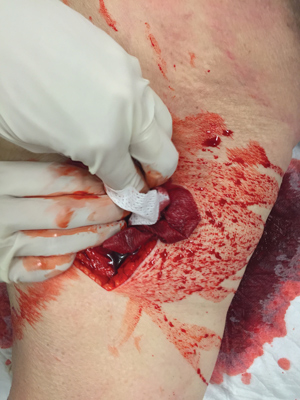 Maintain pressure on the wound while packing, and pack the wound tightly.

Wounds of the chest, abdomen or pelvis shouldn’t be packed because bleeding from these wounds is generally from a very deep source that can’t be reached from the outside. These patients must be rapidly transported to a surgeon for operative bleeding control. Packing of wounds in these areas should therefore be performed at the discretion of local EMS Medical Directors or the appropriate state agencies where applicable.

There are many choices for packing material designed to control hemorrhage. The commercial hemostatic gauze products are impregnated with a variety of substances designed to enhance clot formation, including kaolin, chitosan and others.

In its January 2017 update, the military’s Committee on Tactical Combat Casualty Care (CoTCCC) recommended QuikClot Combat Gauze as the “hemostatic dressing of choice.”5

Alternatives approved by the CoTCCC include Celox Gauze, ChitoGauze and XStat. Military medics have the most experience with Combat Gauze, as it has been widely deployed for years.

Step 1: Stop the bleeding. Now! Immediately apply direct pressure to the wound, using gauze, clean cloth, elbow, knee-whatever it takes to slow or stop the hemorrhage-until you have time to get out your wound packing supplies.

Place your gloved fingers-with or without a dressing-into the wound to apply initial pressure to the target area (with your target being the vein, artery or both) and compress the source of bleeding. Keep in mind that the body’s anatomy presents with major vessels running close to bones. So, whenever possible, utilize a bone to assist with vessel (i.e., bleeding) control. This will also give you an idea of which direction the wound travels and you can insert the gauze accordingly. 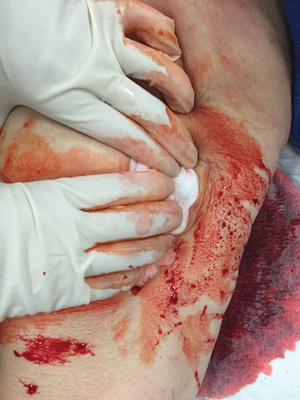 When no more gauze can be packed inside the wound, hold direct pressure on the wound for 3 minutes.

Step 3: Keep packing! The key to successful wound packing is that the wound be very tightly packed, applying as much pressure as possible to the bleeding vessel. This pressure against the vessel is the most important component of hemorrhage control. This explains why plain gauze (without an impregnated hemostatic agent), when tightly packed, is also quite effective.

Step 4: Apply very firm pressure to the packed wound for 3 minutes. This step pushes the packing firmly against the bleeding vessel and aids in clotting.

Should the bleeding continue, hemostatic gauze manufacturers recommend removal of the original packing and repacking with fresh gauze. The rationale for this is that they assume it wasn’t packed properly the first time, or perhaps the packing didn’t quite get to the bleeding vessel.

Prior to repacking, another option is to pack more gauze into the wound, if possible. If no further packing is possible, you must decide whether to remove the gauze and start over or simply apply as much direct pressure to the wound as possible and get the patient to a trauma center quickly. This decision should be made during transport; transport shouldn’t be delayed for extensive packing and repacking of the wound. 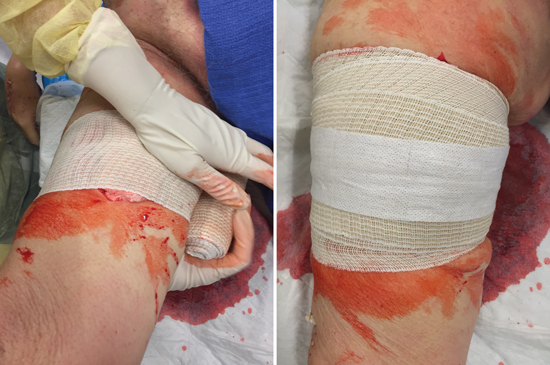 Apply a tight pressure dressing to the packed wound. Once the bleeding is controlled,
consider splinting or immobilizing the area to avoid
dislodging the packing during transport.

EMS providers aren’t typically trained to put their finger deeply into wounds, so a natural hesitancy by EMS personnel is understandable. However, please keep in mind that you won’t harm the patient by deeply packing a wound, you’ll help them.

The biggest mistake in wound packing is being timid. Don’t be shy! Be bold! Pack that wound tightly! And, remember to also perform a complete assessment of your patient so as not overlook other life-threatening injuries.

Make Your own Wound Packing Trainer

For a fun, inexpensive and educational way to teach wound packing, try making your own wound packing trainer. All you need is a few items you can pick up at the grocery store! 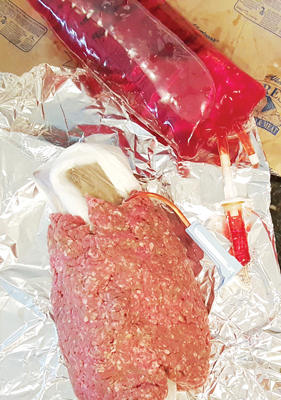 For step-by-step instructions, go to A.J. Heightman’s blog at: www.jemseditorblog.com/2017/03/11/a-j-macgyver-heightmans-homemade-wound-packing-simulator/.

Crash Survivors Reunite with FL Paramedics Who Saved Them