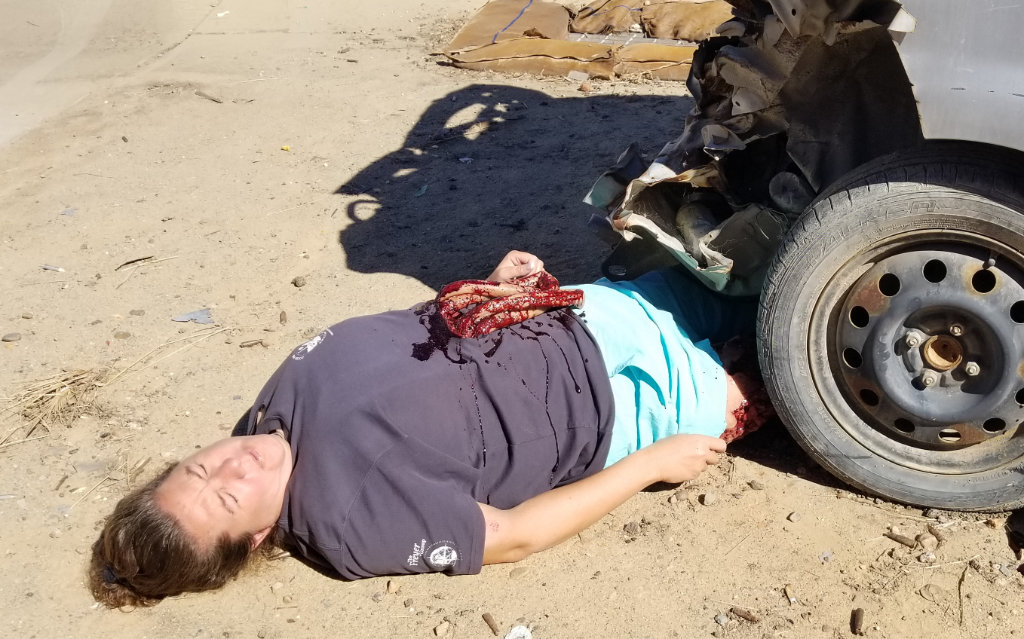 You’re called to the scene of a large structure that collapsed from an accident during demolition. Upon arrival, you’re informed there are multiple casualties in the house, and fire and rescue crews are extricating patients as safely and quickly as possible.

You’re notified of a patient trapped with a large metal beam resting on his left femur. Fire and rescue crews are carefully stabilizing the surrounding support structures and estimate extrication of the patient to be prolonged.

The patient is alert, able to talk to rescue crew members, and reports no other complaints outside of his severe left leg pain.

You prepare for his extraction by considering any potential orthopedic trauma to the patient’s left leg, as well as how to manage his crush injury and the associated toxin release you know can occur.

Up to 40% of multistory building collapse survivors suffer from crush syndrome. And it’s important to note that crush-induced rhabdomyolysis is the most frequent cause of death after earthquakes, apart from direct trauma.1

Typically, release of toxins occurs when reperfusion of the injured area is delayed for 4—6 hours. However, depending on the severity of injury and degree of compression to the muscle compartment, toxin release can occur in as little as 60 minutes.

For example, intra-compartmental pressures as little as 40 mmHg, lasting greater than eight hours, can precipitate this syndrome. Knowing that muscle compartment pressures can reach up to 240 mmHg in a trauma setting, you can imagine how quickly this syndrome can develop. (See Figure 1.) 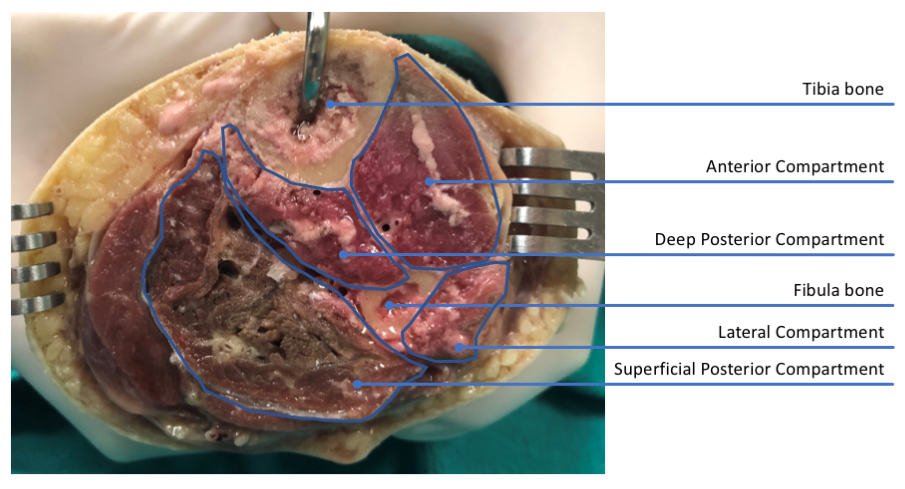 Once muscle and tissue injury are sustained, a cascade of events results in spilling of intracellular contents.

The influx of water results in intravascular volume depletion, leading to hypotension.2 With the continued entrapment of the patient’s limb, hypoperfusion worsens, contributing to tissue hypoxia.

This hypoxia forces metabolism down the anaerobic pathway, resulting in increased lactic acid formation. Additional toxin release from the limb will remain localized at the site of trauma, as venous return proximal to the injury site is impeded.

Once the cause of crush injury and pressure is relieved, all toxins from the damaged tissue cellular components will be released systemically. This systemic release can ultimately be fatal, which should prompt extreme caution and early care when managing a patient with a potential crush injury.

The major detrimental components released during crush injury are myoglobin and potassium. Myoglobin can collect in the kidney faster than it can be eliminated, causing injury to the renal tubular cells, leading to acute renal failure. Potassium leaking from damaged cells will increase intravascular potassium, potentially leading to fatal dysrhythmias.

Several other toxins have also been identified to cause electrolyte disturbances and can have a negative effect, including uric acid, calcium, intracellular enzymes, leukotrienes and phosphate. As many of the toxins released cause vasodilatation, this results in increased capillary bed leakage, edema, third spacing of fluids and hypotension.

Early resuscitation is imperative to prevent hypovolemia and cardiac dysrhythmias.

If administration of fluids isn’t possible due to the situation of entrapment, short-term use of a tourniquet should be considered on the affected limb during extrication until IV access can be established.

Early prehospital resuscitation with IV normal saline is vital to preventing mortality. Patients have been seen going into cardiac arrest just seconds after being rescued from their confinement. Early causes of arrest are commonly due to hypovolemia, hyperkalemia and severe metabolic acidosis, as previously mentioned.

Management of the crush injury patient begins as soon as safely possible, ideally while the patient is still entrapped. If the prehospital provider can safely access the patient, they should always begin with trauma triage, vital signs and cardiac monitoring.

Always remember to treat pain early. Use of the intranasal route for analgesia, via a mucosal atomization device (MAD) or nebulizer (if no MAD is available), should be utilized prior to obtaining IV access.

Fentanyl is a great choice for pain control due to its decreased effect on blood pressure, but will likely need to be re-dosed multiple times during a prolonged extrication. Use of nephrotoxic drugs, such as ketorolac or other NSAIDs, should be avoided.

Due to confinement and positioning, if IV access poses a challenge, early utilization of intraosseous (IO) access is recommended. Initial management includes aggressive fluid hydration with normal saline for treatment of hypovolemia and to prevent acute renal failure from excess rhabdomyolysis.

During extrication, isotonic fluid replacement with normal saline at a rate between 1—2 L per hour is recommended. Potassium-containing fluids such as lactated Ringer’s should be avoided to avoid contributing to hyperkalemia.

Patients with significant comorbidities, or known congestive heart failure, should still receive fluids but must be monitored closely for fluid overload. Particularly, if you note the patient becoming dyspneic or developing crackles/rales during lung auscultation, the IV fluid administration rate should be titrated down.

Use of sodium bicarbonate, acetazolamide or mannitol have traditionally been taught to help facilitate diuresis and alkalinize urine. However, studies looking at preventing acute renal failure in traumatic rhabdomyolysis using bicarbonate and mannitol have failed to show any benefit in preventing renal failure, the need for dialysis or mortality. Thus, the current prehospital use of bicarbonate or mannitol can’t be recommended.2,6

Once extrication is successful, cardiac monitoring is paramount. Early and ongoing ECG monitoring for hyperkalemia is essential so therapy can be initiated immediately. Any ECG signs of hyperkalemia warrant treatment with calcium chloride, beta agonist (albuterol), insulin/glucose and sodium bicarbonate.4

In the hospital, aggressive fluid resuscitation with electrolyte monitoring will be key. Some patients will have target IV fluid goals of 2.5 mL/kg/hr, while other practitioners monitor urine output, with a goal of 200—300 mL/hr, to try to prevent renal complications.6

If renal failure progresses, dialysis may be indicated. Additional infections secondary to the trauma site may lead to sepsis. Compartment syndrome, particularly of the lower limbs, is also a common sequela of crush injury, which may require fasciotomy or even amputation of the limb.

If rescue efforts are unsuccessful, or prolonged, or the patient becomes hemodynamically unstable, consideration must be given for limb amputation. Pain control during extrication is key.

Some rescuers have been hesitant to make progress on extrication due to the patient calling out in pain with any movement of the entrapping material and ketamine may be required to facilitate timely extrication.

Let’s get back to your patient: Rescue has notified you that they’ve secured the area around the patient, and it’s safe for you to get to the patient’s side. You initially give intranasal fentanyl with good relief of pain.

A humoral IO line is started, and your patient has already received 2 L of normal saline. Two tourniquets have been placed above the injury site on standby and are not fully engaged. You prepare bicarbonate, calcium chloride, albuterol, insulin, D50, fentanyl, ketamine and more IV fluid.

Your initial ECG is sinus tachycardia with narrow QRS complexes and unremarkable T waves. You give an additional dose of fentanyl and you signal rescue to free the patient’s limb.

The patient’s distal extremity is evaluated and obvious deformity is found. Movement is restricted by pain, but good distal pulses are present and sensation is intact. You start a 14 g IV line, the leg is splinted and you hang your fourth liter of fluid.

You note the patient to be shivering and begin rewarming measures with warmed IV fluid and blankets.

You deliver your patient to the trauma center, ensuring adequate pain control, without further incident. On your QA/QI review, you find that the patient made a full recovery.

Remember, crush injuries are a different form of trauma that require a very different mindset and approach to patient care. Local physiologic deterioration can begin very quickly, but systemic effects aren’t seen until the external pressure on the extremity or body part is released.

The presentation of crush injuries can also be very clandestine, as in automobile accidents, due to local or central sensory neurological interruption and damage.

Therefore, it’s essential to insist upon earliest possible access to the patient to assess the possible/probable extent of any crush injury and prepare/monitor the patient before the external forces causing the injury are released. This is the only way to prevent the sudden and complete demise of the patient, something which can easily happen in this scenario.