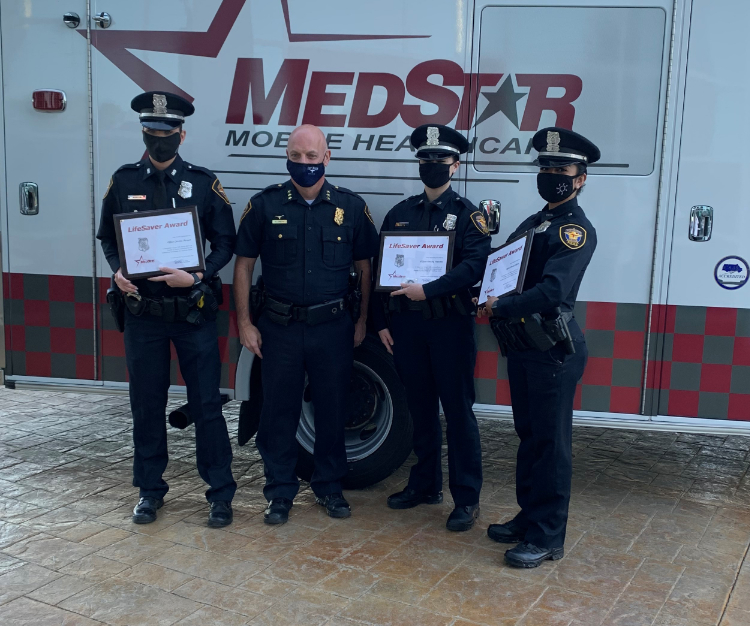 Three Fort Worth (TX) Police Officers were presented with Lifesaver Awards on Wednesday for their actions in saving the lives of two shooting victims last month.

The MedStar crews who were part of the response presented the award to the deserving officers.

On October 19th, 2020, at approximately 1 a.m., emergency units responded to a shooting call on Meadowbrook Dr. in Fort Worth.

Fort Worth Police Officer Claudia Alfaro arrived first, and upon arrival, immediately identified that there were two shooting victims.

Seeing that one of the victims was shot in the neck, Officer Alfaro immediately began applying pressure to the gunshot wound, until MedStar arrived on scene and took over treatment.

Officers Jessica Morgan and Chelsey Newsom arrived on scene and began treating the second shooting victim. The victim had a gunshot wound to the upper left thigh, which traveled through her leg, lodging in her right upper thigh.

Officers Newsom and Morgan immediately applied tourniquets to both of the victim’s legs to stop the bleeding until a second MedStar Unit arrived to take over treatment.

These officer’s immediate actions were critical in preserving lives of two victims who were risking of bleeding to death.

Officers Alfaro, Newsom and Morgan quickly utilized their training, while showing care and compassion for the victims during a high stress situation.

0
An armed suspect stole an ambulance early Friday while a patient and a firefighter were inside, Houston police said.