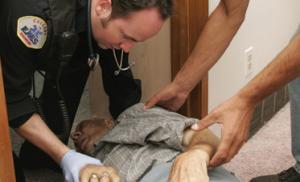 Alcohol abuse is a major cofactor in fatal injuries. Alcohol-related liver disease is a significant cause of morbidity and mortality in the U.S. and worldwide. Such disease ranges from fatty liver and hepatitis, to life threatening cirrhosis. (1) It’s diagnosed predominantly on clinical history and physical examination with laboratory testing to confirm and quantify the extent of damage. (1à3) Although advanced cirrhosis may ultimately require liver transplant, abstinence, infection prevention and nutrition are mainstays for early disease.

Hepatic encephalopathy (HE) is a reversible neuropsychiatric syndrome of abnormalities characterized by alterations in mental status, personality, intellectual function and derangements in neuromuscular activity. HE is associated with liver dysfunction — in patients with both acute liver failure and liver cirrhosis — and is characterized by a range in severity of cognitive and motor deficits. (1, 2) HE can be triggered by dehydration and low oxygen levels in the body — physiologic responses to airline travel or such reversible factors as constipation, hypokalemia, sedative ingestion or infection. For instance, the patient discussed in“Herbal ‘Remedy'”had just flown in from India.

Early symptoms can include irritability, personal neglect, disrupted sleep patterns, while late stage HE may manifest with delirium and coma, hyperreflexia, rigidity, myoclonus and asterixis. (1à4) Nearly 70% of patients with cirrhosis may have some signs of HE. (2)”ž

Despite years of research, the exact mechanism of HE remains elusive, likely a complicated interplay of many factors instead of one process. (1-4) Abnormality involving ammonia metabolism is the primary mechanism associated. Excessive plasma ammonia can accumulate in the central nervous system (CNS) as a result of a damaged liver’s inability to metabolize it — a byproduct of protein cleavage in the gut. This high level of ammonia can cause alterations in neurotransmission, and is likely one cause of the motor dysfunction exhibited in HE. Gamma aminobutyric acid (GABA), which is the principal neuro-inhibitory neurotransmitter, is increased in the cerebral spinal fluid (CSF) of HE patients. Other toxins also associated with HE that are found in the CSF include benzodiazepine-like compounds, which also explain why flumazenil has shown promise in a subset of HE patients, oxygen free radicals and inflammatory cytokines. (2,4)”ž

Decerebrate posturingis an abnormal body posture: The arms and legs are held straight out, and the toes are pointed downward, while the head and neck are arched backward. The muscles are held rigidly. It’s often associated with severe damage to the brain, usually at the level of the brainstem. It can be unilateral or bilateral, or involve only the upper extremities. A patient exhibiting decerebrate posturing can also alternately experience decorticate posturing.”ž

The following are associated with decerebrate posturing:”ž

Decorticate posturinginvolves flexion of the arms, clenched fists and extended legs. The arms are bent inward toward the body with the wrists and fingers held on the chest. This suggests severe damage to the brain, corticospinal tract. It may progress to decerebrate posturing or alternate between the two. It can involve one or both sides of the body.”ž

Causes are similar to those associated with decerebrate posturing as well as brain stem tumors.”ž

Jaundice/icterus:Severe liver damage is often associated with a yellowish tinge to the skin and/or eyes (icterus). Although beyond the scope of this paper, it is important to recognize that certain drugs and pathological processes can cause a wide array of discolorations of lips, mucous membranes, sclera or skin; the astute responder will take note of these in the examination.”ž

Hepatomegaly:An enlarged liver can be readily palpated. Often patients with significant hepatic disease will have ascites or increased fluid that can be percussed or felt on the abdominal examination.”ž

In patients with known alcoholism, especially accompanied by liver damage, in the setting of a precipitating event, the clinical presentation is often sufficient to make the diagnosis. Lab testing is necessary to characterize the extent of damage as well as exclude other etiologies, such as azotemia, hyponatremia, hypoglycemia and psychoeffective drugs. A physical examination along with a good history are critical to diagnosing HE.

Early treatment includes ruling out other readily identifiable etiologies of coma — in the field, fluid maintenance, glucose reading and airway management are important.”ž

Though not the realm of EMS, the definitive treatment involves lactulose and lactitol as nonabsorbable disaccharides used as first-line agents, which acidify the gut lumen enhancing the conversion of ammonia to ammonium. Non-systemic antibiotics (e.g., nonabsorbable antibiotics, such as rifaximin) can reduce ammonia production by decreasing urease-producing bacteria in the intestines. Other drugs have been used to eliminate ammonia from plasma — these include L carnitine and L ornithine — studies are still being conducted to identify the ideal candidates and evaluate effectiveness. Flumazenil — known mostly as a reversing agent for benzodiazepine somnolence (not to be used for respiratory depression — the treatment for which is airway management, ventilator support) — is a short-acting benzodiazepine receptor antagonist which has been shown to have benefit in HE. There is some evidence that HE involves the benzodiazepine 1 receptor. Although long-term benefit has not been observed, in random control trials, patients receiving flumazenil did better in the short term. However, there remains the risk of agitation, seizures and vomiting with flumazenil use. (4)”ž