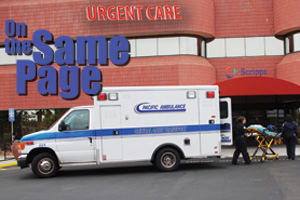 Medic 25 is called to a local urgent care center to a chief complaint of a possible heart attack at 8:45 p.m. On their way there, one of the medics tells his partner they’ve been getting multiple calls to this facility at about the same time each evening, so they can “unload” their patients before it closes at 9 p.m. He says it’s usually for minor complaints and seems to be more for the convenience of the urgent care center staff than for any true emergencies.

When they arrive, they ask the receptionist which room they need to go to for their patient. She doesn’t seem to know anything about it. Finally, a medical assistant arrives at the desk and says impatiently, “Oh, you finally got here.” She then leads the EMS crew back to a patient room, where they see a middle-aged man talking on a cell phone while sitting in a chair. The man doesn’t have an IV, oxygen or a monitor. He finishes his conversation as the EMS crew readies their monitor and other equipment. One of the medics says, “We’re here to take you to the hospital.”

Clearly puzzled, the man asks, “What do you mean, go to the hospital? I have to get home and feed my cat.”

The other medic then leaves the room and tries to find the doctor, who finally emerges from another patient’s room. “Sir,” the medic starts out, “we need to talk to you about the patient in room two that you called us about.”

The doctor looks up absently. “What do you mean? Why are you still here? You should already be on your way with that patient. Didn’t they tell you he may be having a heart attack?”

Discussion
It seems like there are more problems associated with EMS interactions with staff at medical facilities, such as urgent care centers and doctors’ offices, during patient transfers than with actual scene runs. Because medical personnel are on both ends of the transfer, there should be a smooth transition of a patient from these facilities to the hospital. But many times confusion, misunderstanding and poor patient care are associated with these situations.

Ignorance of Each other’s Capabilities
Urgent care centers aren’t usually equipped like an emergency department. Having been personally involved with the setup of urgent care centers, my experience has been that many of the centers have a narrow profit-to-loss ratio, so they need to see a lot of patients with minimal staff. They’re usually staffed leanly with a physician or physician extender, such as a nurse practitioner or assistant. They also may have only a medical assistant and a receptionist. Of course, there are urgent care centers with more robust staffing, including registered nurses and X-ray techs, but they’re the exception and not the rule.

Also, urgent care centers are not usually designed to take care of anyone who’s really sick or even potentially really sick. Usually, when they call 9-1-1, there’s a good reason, and it’s in the patient’s best interest for you to respond as quickly as possible because sometimes people who think they have indigestion go to an urgent care center when they’re actually having a myocardial infarction. Or, they think they have something as minor as a cold or headache and end up having a pulmonary embolism or stroke.

For this reason, EMS crews should consider this type of run equivalent to a scene run. Just because you’re going to a medical facility that has a doctor on site, you can’t expect them to have a full complement of equipment and medications available. Additionally, you shouldn’t expect to see much, if anything, done for the patient from a treatment standpoint. Many urgent care centers don’t have oxygen, IVs, monitors, or IV medications. For example, the chest pain patient previously mentioned may have received aspirin or possibly a sublingual nitroglycerin.

Plan Ahead
It’s important for EMS providers who may respond to calls at a local urgent care center to know the capabilities of that facility. It would be worthwhile to call the center and even do a site visit to get a clear understanding of what they can and can’t do. This should be documented and placed on file at the EMS station, so that individuals unfamiliar with that particular geographic area can access the document and understand what to expect when they’re called there. You may even be able to add it to your computer-aided dispatch system.

It’s a good idea for the medical director of the urgent care center and officials from your EMS agency, particularly your medical director, to meet. This is true especially when a new center opens in your service area. Some urgent care centers accept patients brought in by EMS. So, if your protocol allows this, then that would be a crucial item to discuss right away.

Sharing information is also a good idea because it lets the urgent care center know your capabilities and what you’re required to do as an EMS system. In our system, we ask each patient if they want to go to the hospital. Some doctors and nurses in urgent care centers have a hard time with this because they assume if they call 9-1-1, and they want the patient to go to the hospital, then the patient has to go. I’ve had more than one conversation with medical personnel about patients having the right to refuse the recommendations of their health-care providers, even if that may result in a poor outcome for the patient.

Fumbling the Hand-Off
How many times have you been called to a facility for a patient transfer, whether it’s an urgent care center, nursing home, community clinic or doctor’s office, walked into the patient’s room and had them look up at you like they have no idea what you’re doing there or what you’re talking about? Then, when you finally find a nurse and/or doctor to clarify the situation, you become the bad guy because of the perception that you started rendering care to a patient or talked the patient out of going to the hospital?

This phenomenon occurs because of a lack of a coordinated approach to the patient transfer. Sometimes the urgent care center will call 9-1-1 and then move on to the next 20 patients who are waiting, assuming the EMS crew will handle everything from there.

Or, the doctor will hurriedly explain to the patient that they need to go to the hospital, but they won’t take enough time to explain why or listen to the patient’s concerns about extenuating circumstances that need to be addressed before going. For example, the patient may be concerned about feeding the cat, letting the dog out, picking up the kids from school, etc.

So, the best way to ensure a smooth hand-off is a coordinated and collaborative approach. First, someone should be assigned to greet EMS on arrival and escort them back to the patient’s room. An urgent care center isn’t an emergency department, so there shouldn’t be any codes occurring that would prevent a staff member from being available for this function. On the way to the room, the staff member should inform the EMS crew of the name, age, chief complaint, medical interventions performed and current status of the patient being transported.

Effective Communication
One way to defuse a potentially explosive situation with an urgent care center is to facilitate clear communication between both parties. Identify an appropriate liaison at both the urgent care center and the EMS system who can be a consistent contact when issues arise. Communicating by e-mail may not be the best way to represent a situation. Sometimes, it may be necessary to have a face-to-face meeting with all parties involved in a particular case, especially for those in which there seems to be animosity or there was a bad patient outcome.

It may be wise to keep a list of all calls made to the urgent care center over a specified time frame to see if there’s a preponderance of calls made at closing time. This list can also clarify the true number and nature of these calls, so that EMS personnel aren’t under any false perceptions, such as, “We get called there every day,” or “Every call there is about nothing.”

The best formula for perpetuating a bad situation in these cases is refraining from talking about it or blaming the other party. Over time, this establishes a bad reputation on the part of the EMS system or the urgent care center. Although runs to urgent care centers comprise a very small segment of your overall call volume, they can result in a large percentage of complaints and misunderstandings. Effective communication and collaboration between the EMS system and the urgent care center will reduce these complaints and foster a better understanding of the challenges affecting each party. JEMS

This article originally appeared in August 2010 JEMS as “On the Same Page: Making Transitions between EMS & Urgent Care Centers Smooth”