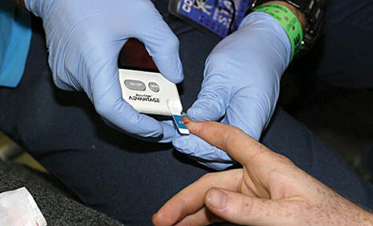 With an estimated 20.8 million Americans — almost 7% of the population — suffering from diabetes, type 2 diabetes (90-90% of all diagnosed and undiagnosed cases) has emerged as one of the world’s greatest health threats.(1)

Despite clearly known risks — such as hypertension, MI, stroke, blindness, renal failure and amputation — people continue eating themselves into an often preventable disease. All because we tell ourselves one little lie: “It will never happen to me.” Or worse yet, we don’t even know or appreciate the consequences of our food and exercise choices.

Once diabetes is diagnosed, the message evolves: “I can’t do anything about it…,” “Medicine will fix it…,” “It won’t hurt to eat this just this once…,” “I deserve this little reward…. I’ll do better tomorrow,” or “I’ll start exercising just as soon as … .”

The Diabetes-obesity link
Under normal circumstances, naturally occurring insulin in the body allows muscles and tissue cells to draw upon the sugar (glucose) present in the blood for energy. When our bodies carry excessive weight (to the point of obesity) the muscle and tissue cells become insulin resistant. The resulting glut of sugar in the blood (hyperglycemia) leads to diabetes. In people with diabetes, the pancreas either produces little or no insulin, or there’s a problem with the insulin receptors, so muscle, liver and fat cells aren’t able to use the insulin properly. As a result, glucose builds up in the blood, while the cells starve.

“Diabesity,” or diabetes brought on by obesity, is now the largest epidemic the world has faced.(2) Modern lifestyles and dietary habits have led to a global epidemic of obesity and type 2 diabetes with a rise in multiple cardiometabolic risk factors. On Dec. 21, 2006, the United Nations General Assembly unanimously passed a resolution declaring diabetes an international public health issue, only the second disease to attain that status (after HIV/AIDS).(2)

Keeping up
As our government grapples with the challenge of providing care and paying for the billions of dollars that diabetes treatment exacts on the economy, we should renew our efforts to promote healthy lifestyles and advocate optimum wellness strategies.

EMS personnel, especially, should be very familiar with the nature and treatment of this disease because the information changes almost daily. Ask yourself: How does diabetes present? How is it usually managed day to day? What types of appliances may patients be using to treat their disease? How do these patients present when complications are evident? What medications are patients taking, and how do they work?

Think you have all the answers? What about that last one? Did you know Pfizer recently updated the WARNINGS section of its literature for Exubera, a short-acting insulin delivered via inhaler that helps control high blood sugar in adults with diabetes?(3)

Until the diabesity trend slows, EMS providers should actively seek out the latest information on the disease, starting with “The Modern Diabetic,” in May 2008″žJEMS. Other resources include the”žAmerican Diabetes Association,“žCenters for Disease Control and Prevention,“žDepartment of Veterans Affairs,“žJuvenile Diabetes Foundation International and”žNational Institute of Diabetes and Digestive and Kidney Diseases of the NIH.

Connie Mattera, MS, RN, TNS, EMT-P, is the EMS administrative director for the Northwest Community EMS System located in the northwest suburbs of Chicago. She has been an emergency nurse and paramedic for more than 30 years and has a passion for excellence in prehospital education and care.