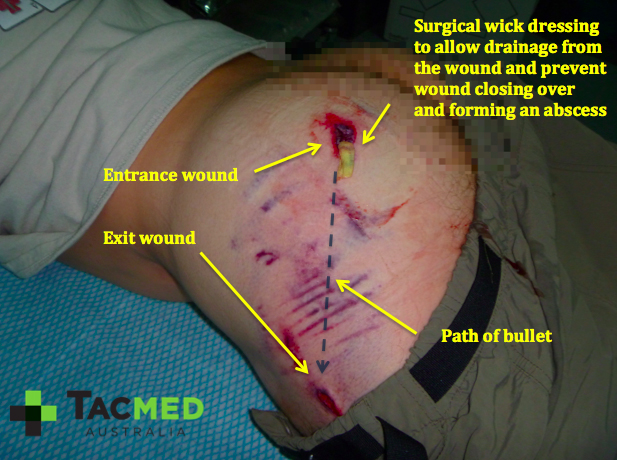 This case study is of a good friend of mine (written with his consent) who sustained a through-and-through gunshot wound from an AK47 round from a range of approximately 200m. The operator who was shot belonged to a US Government Agency, and my element and his were on a combined counter-narcotic job in Southern Afghanistan at the time.

As with any casualty in a tactical or high-threat environment the highest priorities are to control the threat situation if possible, minimise the likelihood of sustaining further casualties, or becoming a casualty yourself, and only then move on to casualty assessment and treatment. The video below demonstrates these principles in what has been coined by the Committee on Tactical Combat Casualty Care (CoTCCC) as Care Under Fire. The video is of a Reality Based Training (RBT) scenario in which an operator in the open has sustained a gunshot wound to the leg and is bleeding arterially. The responding operators assess the situation without exposing themselves to the fire-lane in which the simulated casualty has been shot. After encouraging the casualty to apply his own tourniquet and crawl to them, the responding operators use a combination of suppressing fire and smoke to suppress the threat and conceal the extraction of the casualty to a position of cover. From there a rapid assessment and treatment of only the immediately life-threatening injury is performed before further extracting the casualty to a safer locality.

The casualty had an initial surgical cleanout of the wound when he returned to base and the tract of the bullet was packed with a wick dressing to allow it to continue to drain any infection out, rather that have it trapped in the tissues of the buttock to form an abscess. He turned up to work for the very next job, less than 36 hours after being shot!

Despite antibiotics and daily wound cleaning and dressing changes, by day 7 post-injury the casualty’s wound had become infected. It can be appreciated that as the projectile passes through the human tissue it takes with it contaminants from the bullet itself, as well as the clothing that it has struck before entering the tissues, which in Afghanistan was always contaminated with dust with high fecal content. This coupled with the huge alternating positive and negative pressures associated with the temporary cavitation process seed these contaminants throughout the wound. The fact that the casualty (to his credit) continued to go out on jobs almost every day during the week following his wounding also made him a sitting duck for serious infection in the wound. 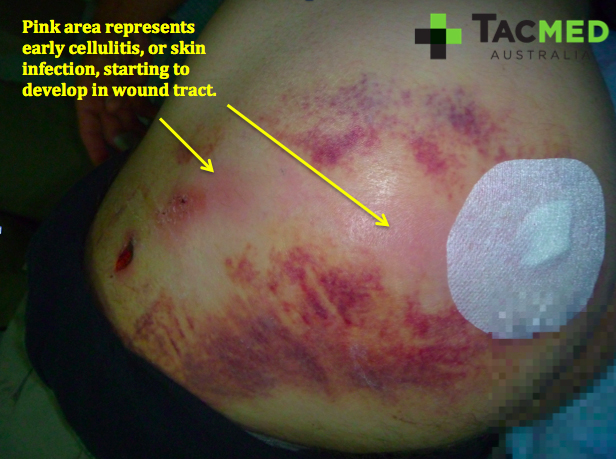 Special thank you to the author and to TacMed Australia for granting permission to share this story with our readers. JEMS