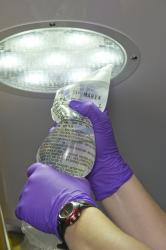 For years, one of the basic tenets of emergency care has been to give IV fluid to help normalize blood pressure in a patient who is hypotensive. Common reasons for hypotension include hemorrhage, sepsis, burns, diarrhea and cardiac failure. In recent years, however, there has been an increasing move toward limiting the amount of fluid that we give to hypotensive patients.

In the case of bleeding patients, this has been driven by the theory that increasing blood pressure disrupts clot formation and may make bleeding worse. Recent research in sepsis has also hinted at a phenomenon thus far not even considered–that hypotension is an adaptive response, honed over millions of years of evolution, which may mean that we are actually making patients worse when we thought we were helping them.

Hypovolemic Shock
The idea that hypotension as a result of hypovolemic shock from hemorrhage might not be such a bad thing has been around for quite a while. A study published in the New England Journal of Medicine in 1994 compared prehospital fluid resuscitation with no prehospital fluid resuscitation in patients with penetrating trauma to the chest or abdomen.(1) In the study, 598 patients were randomized, 309 to standard care and 289 to not receive IV fluid until their bleeding had been surgically controlled. The control group that received standard fluids received on average 2.5 L of fluid (combined prehospital and emergency department) before getting to the operating room, while the intervention group, which didn’t receive standard care, received around 400 mL of fluid in total before bleeding was controlled.

Interestingly, blood pressure at the time surgery began wasn’t significantly different between the two groups; however, there was a statistically significant increase in the number of survivors in the intervention group: 70% of the patients who didn’t get IV fluid survived, compared with 62% of those who did. There was also a non-significant trend toward increased intra operative blood loss in the control group.

The authors of this study postulated that the reasons for the increased mortality in those given fluid could include disruption of blood clots by increased pressure, dilution of hemoglobin concentration leading to poor oxygen delivery and dilution of clotting factors leading to poor clotting.

At the time, these conclusions were shocking, and it has taken a long time for practice to change; however, many ambulance services and EDs now have a policy of “permissive hypotension” for patients with penetrating truncal trauma.

A follow-up retrospective database review in 2011 has largely confirmed the findings of this earlier study.(2) The authors searched the American College of Surgeons National Trauma Database from 2001—2005. They identified more than 1 million patients, with prehospital data available for 776,734. Survival was then analyzed based on whether the patients had an IV cannula placed or IV fluids administered. It wasn’t possible to discriminate between these variables using the database.
The authors found that mortality was increased in almost all cases in the patients who had prehospital IVs placed. However, the effect was particularly marked for patients with penetrating trauma and patients who were severely injured.(2)

Note: Although this is a large study, there are many drawbacks to any retrospective analysis. In particular, it’s important to remember that correlation doesn’t equal causation. This study will never be able to tell us why the patients who got prehospital IVs were more likely to die. However, the factors contributing to increased mortality from the earlier randomized study seem valid.

Septic Shock
Hypovolemic shock isn’t the only indication for prehospital IV fluid. Septic shock is also a more common presentation. In 2011, a landmark paper looked at fluid resuscitation for septic shock, and the results of this study have caused us to reconsider the treatment of shock.

The study, the Fluid Expansion as Supportive Therapy (FEAST) trial, was published in the New England Journal of Medicine in June 2011.(3)It was a prospective, randomized, controlled trial of more than 3,000 children with septic shock in sub-Saharan Africa. Many have criticized applying the study to prehospital industries in developed nations because of its apparent lack of applicability to prehospital industries in modern Western medicine, especially considering it looked at children in resource-poor settings in Africa, most of whom had septic shock secondary to malaria. However, others are of the opinion that the results of the study would be similar if the trial were repeated in adults in a resource-rich healthcare system.

The study was carried out in Kenya, Uganda and Tanzania. Children who presented with a severe febrile illness complicated by impaired consciousness or respiratory distress and with evidence of poor peripheral perfusion were eligible for enrollment. Children were excluded if they had severe malnutrition, gastroenteritis or a non-infectious cause of shock, such as trauma.

The study showed a decreased mortality at both 48 hours and four weeks in those who didn’t receive a fluid bolus. Patients who received a fluid bolus were 48% more likely to be dead at 24 hours than those who didn’t. This effect carried out to four weeks. There was a non-significant trend toward increased pulmonary edema in the fluid bolus groups, but this can’t fully explain the increased mortality. A criticism of the study is that the hospitals involved had no facilities for mechanical ventilation of patients with respiratory failure.(4)

The remarkable results of this study have sparked many questions regarding our approach to fluid resuscitation for septic shock in the resource-rich world. Although this study shouldn’t change fluid resuscitation practices in adults in the U.S., it should lead to further research to clarify whether we are actually helping patients with IV fluid or harming them.

Four Fallacies
In response to the FEAST study,  a thought-provoking opinion piece was published in Critical Care.4 In it, the authors highlight the lack of evidence supporting the practice of fluid resuscitation in septic shock and then put forward four logical fallacies that may explain our reluctance to discontinue this treatment.

The philosophical fallacy: “The patient has poor perfusion. If I give them fluid, I will increase their blood pressure and they will get better.” The fallacy here is two-fold. One is the assumption that poor perfusion is bad. Some have suggested that shock may even be an adaptive response to illness–limiting blood flow to unnecessary organs while the body heals. The second error is the assumption that fluids are the only way to increase blood pressure.

The experiment fallacy: “IV fluid improves outcomes from shock in mice.” Unfortunately, a close look at the animal evidence shows very little similarity between the animal studies and real-life situations. For example, most mice in experiments are resuscitated with slow subcutaneous fluid boluses, rather than rapid IV boluses.

The analogy fallacy: IV fluids help in gastroenteritis and diabetic ketoacidosis, so they must help in septic shock. The obvious error here is that these patients are actually losing fluid from their bodies, and that it must be replaced.

Future Implications
So where does this leave us when we’re sitting in the back of an ambulance with a patient in shock? In short, we don’t really know. If the patient has a gunshot wound to the chest, some evidence suggests that the most important thing is for them to be in an operating room as soon as possible, and probably not to have much, if any, IV fluid before their bleeding can be stopped.
If the patient has septic shock from pneumonia, we aren’t certain what future recommendations will be. In the meantime, we should follow existing protocols. It’s likely that in the near future, these protocols will be reviewed to severely limit the amount of fluid we give to shock patients, perhaps with a greater emphasis on vasopressors. So-called “push-dose vasopressors,” such as phenylephrine or metaraminol, have yet to achieve wide adoption in North America but are commonly used in Australia. These drugs are alpha-adrenoreceptor agonists that can be administered as boluses via a peripheral IV (unlike norepinephrine) and are used to increase blood pressure in patients in shock (particularly those with septic shock) instead of large volumes of fluid.

Further studies will be needed to guide fluid resuscitation in the future. But with recent studies turning the dogma we previously clung to on its head, this is certainly an exciting time to be involved in prehospital care. For an additional, expanded review of fluid resuscitation, watch for a clinical education article by MedStar EMS Emergency Physicians Advisory Board Medical Director Jeff Beeson, DO, in an upcoming issue of JEMS.