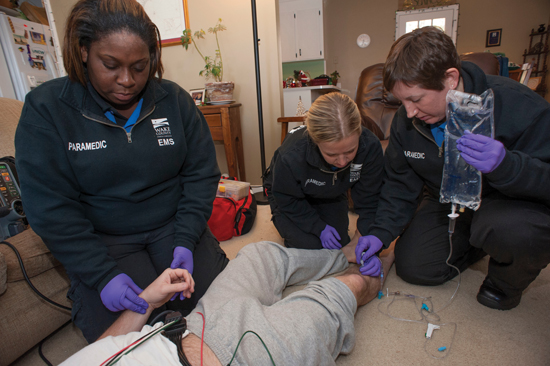 There’ve been a lot of articles about therapeutic hypothermia lately. Cooling is primarily designed to protect the brain in an ever-evolving battle for full neurologic recovery. Published in November 2013 in the New England Journal of Medicine, this is a large, randomized, 939-patient, international trial comparing all-cause mortality and neurologic recovery at two different cooling temperatures.

Methods: Patients older than 18 who suffered an out-of-hospital cardiac arrest arrived at the hospital with a Glasgow Coma Scale of less than 8 were included for this trial. Patients who didn’t maintain a pulse for more than 20 minutes, or had an unwitnessed cardiac arrest with asystole as the presenting rhythm, were excluded.

Patients were then randomized equally into two groups, either being cooled to 33°C (91°F) or 36°C (96.8°F). Both patient subsets were sedated and cooled for 28 hours and then gradually rewarmed to 37°C (98.6°F), which is normal body temperature. After 36 hours, sedation was weaned to assess neurologic function. Patients were kept afebrile after rewarming measures. Patients were then followed for 180 days and assessed for all-cause mortality and neurologic recovery using the Cerebral Performance Category score previously discussed in this column.

Results: The median age for all patients enrolled was 64, with the overwhelming majority being men. The median resuscitation time for all patients was 25 minutes. Interestingly, the patient groups were remarkably similar in nearly all categories. Forty-one percent (384) of all patients presented with an ST segment elevated myocardial infarction (STEMI) on arrival. Of the 939 patients, 247 (26%) had their life support withdrawn in the first seven days. In the 33°C cooling group, 48% (226/473) died in 180 days compared to 47% (220/466) of the 36°C cooling group–a non-statistical difference. There was also no significant difference between the two groups in regard to neurological recovery, with both groups showing approximately 53% of patients dying or displaying poor neurologic function after 180 days.

This article doesn’t suggest that cooling doesn’t work, nor does it suggest we should move to a different cooling temperature. It does, however, suggest the level of cooling is less important than preventing fever. Cardiac cooling is a relatively new foray in the world of cardiac arrest, and we’re certain more research will come our way, not just in the realm of ideal temperature management but also length of cooling as well as the role of EMS.

Thanks to Keith Wesley, MD, for sending this article to us.

What we know: Post-cardiac arrest cooling has shown promise over the past few years.
What this study adds: The temperature patients are cooled to may not be as important as preventing hyperthermia overall.

This study protocol gives us a sneak peek at an upcoming clinical trial based in Belgium, Sweden and the Czech Republic. Designed as a single-blind, randomized, controlled trial, patients will be assigned to a standard therapy control group or “intra-arrest hypothermia” in which they are cooled with the new Rhinochill device (manufactured by Benechill Inc.). Rhinochill delivers intranasal perfluorohexane, designed to lower body temperature in an area close to the cerebral blood flow pathways. Patients resuscitated in the field are then cooled in the hospital, regardless of which study group they are assigned to. Neurologic performance following cardiac arrest will serve as the endpoint. This is exciting in several ways, including the use of a relatively new device as well as the involvement of EMS. We look forward to seeing the results of this study.