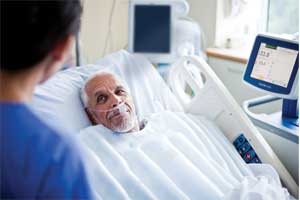 Hypothermia has been gaining steady ground as a standard of care for cardiac arrest patients. A new clinical study in Europe being sponsored by Philips Healthcare is taking a look at rapidly induced hypothermia by infusion of cold saline and endovascular cooling before reperfusion in patients suffering ST-elevated myocardial infarction (STEMI). It is hoped the study will determine whether hypothermia can make an even bigger difference in reducing heart damage in these patients.

“STEMIs are large heart attacks where a lot of heart tissue is at risk for permanent damage, which can lead to subsequent heart attacks, congestive heart failure and other co-morbidities,” says Brad Klos, vice president of marketing for Philips Healthcare’s InnerCool business unit. “If you can prevent this myocardial damage, you will have a stronger, healthier heart that can possibly lead to less heart-related issues in the future.” The new study will concentrate on what Klos calls “the next frontier” for hypothermia, which is to preserve myocardium in the heart.

Study Parameters
The CHILL-MI trial started in June and is being led by Professor David Erlinge, principal investigator and head of the department of cardiology at Lund University Hospital in Sweden. It’s anticipated that the study will take about a year to enroll 120 patients at 10 centers in four countries: Sweden, Denmark, Germany and Austria. Half of the patients will be cooled in the experimental group, and the other half in the control group will not. In addition, cardiac MRIs will be used to measure heart damage. Results are expected sometime next year.

The EMS industry will be closely watching the trial’s results. In past STEMI hypothermia studies, results were inconclusive. However, those studies revealed some promising insights. “There were subgroups within each study that showed patients whose core body temperature was below 35° Celsius at the time a balloon angioplasty was done saw a significant reduction in heart damage,” says Klos.

Deepak L. Bhatt, MD, MPH, a researcher and chief of cardiology at VA Boston Healthcare System, acknowledges the provocative data coming out of hypothermia studies and notes a range of uses with respect to stroke, cardiac arrest and STEMI. But he stresses the need for clinical proof.

“Whether hypothermia works in preserving heart muscle seems quite logical, but the only way to know for sure is to do a clinical study,” he says. “Things that have been shown to prevent heart attacks, or reduce the size of heart attacks or myocardial infarctions, that have been promising in animal models or small human studies, don’t always pan out in large human studies, so we need to see what the data from CHILL-MI show.”

One of the challenges in this study, and indeed in treating STEMI patients with hypothermia, is the “awake” factor. “The challenges in cooling an awake or conscious patient versus a paralyzed patient are quite different,” says Klos. “Surface cooling systems induce shivering quickly in conscious patients and can’t provide the fast cooling required to cool STEMI patients prior to angioplasty. Most STEMI patients, unlike cardiac arrest patients, are not intubated and, therefore, cannot be paralyzed.”

Klos adds that time is another factor. STEMI patients in the CHILL-MI trial are cooled through endovascular means for only one hour. Most cardiac arrest cooling protocols require 24 hours of cooling. The CHILL-MI trial is addressing reperfusion injury in the heart unlike cardiac arrest patients where the focus is on reperfusion injury in the brain.

But the cooling is impactful. “Previous human studies, animal studies and a recently published pilot study called RapidMI-ICE have shown that if STEMI patients can be cooled to less than 35° Celsius before the angioplasty, 40% of the heart muscle at risk can be salvaged, which is a significant amount,” Klos says. “If the patients are not at this temperature or lower, we are not seeing this level of reduction in heart tissue damage.”

Hopeful Signs
Because of the many lifesaving features of hypothermic cooling for cardiac arrest patients, the U.S. has seen a significant uptick in this therapy in the past few years with EMS agencies starting the cooling process in the field. Many hospitals are now using hypothermia in their facilities for cardiac arrest patients. But more needs to be done in hypothermia with STEMI patients.

Bhatt acknowledges that hypothermia has had a somewhat checkered past because of the level of complexity of heart attack treatment. “Important factors are identifying and opening blocked arteries, which needs to be done quickly–in less than 90 minutes. Initiating hypothermia too late in that cycle will probably not yield much benefit because once the artery is open, reperfusion injury can occur,” he said. Many drugs have attempted to reduce this injury, but none have yet been successful, so a major issue with hypothermia is making sure the procedure gets initiated in a timely way. “Without doing that, I think the chance of it succeeding is much more slim,” says Bhatt.

Getting personnel properly trained and in place to treat the patient adds another level of complexity to the process. “You don’t want to delay the primary therapy for any add-on therapies and certainly for experimental therapies as they are being evaluated, so for ongoing and future trials of hypothermia it will be important that any incremental delay not be more than just a few minutes,” Bhatt says. “These will be factors that the CHILL-MI investigators will have thought out.”

Bhatt stresses, however, that if the data from this study are strong, and there’s a significant reduction in the amount of heart muscle damage using hypothermia, then the treatment should be used, “even if it adds a bit of complexity to the overall procedure and care of the patient,” he says. “I don’t think it would be an inordinate amount of complexity; however, it wouldn’t be a trivial add-on either.”

Continuity of care will also be a factor in future successful treatment of hypothermia. EMS personnel, emergency department physicians, the cardiac cath lab, the intensive care unit and the nursing staff all currently care for cardiac arrest patients being treated with hypothermia. “You’ve got to get all these specialties on the same page,” says Klos. “It’s hard to get doctors within one specialty to agree, let alone three specialties and nursing as well.” Patient treatment in the CHILL-MI trial will occur in the cath lab, which means the decision to treat will rest primarily with the interventional cardiologist.

“Whenever you are tinkering with the care of heart attack patients, it involves system-level approaches and figuring out who is going to initiate hypothermia,” Klos says. “There are potential challenges. But if the data are strong [in this study], I don’t think the challenges will be viewed as a major obstacle for adoption. If the data aren’t strong, the point is moot.”

Summary
Clearly, a need exists to continue to improve heart attack therapies, given the 500,000 or so patients who suffer a myocardial infarction or STEMI in the U.S. every year. Hypothermia is showing itself to be an important contributor in that regard.

Bhatt acknowledges that hypothermia has resulted in a lot of hope and disappointment, especially in finding the Holy Grail combination of effective drug therapies and cooling processes. But he notes several reasons to be optimistic. “Scientifically, this approach seems very sound, with a fair amount of clinical data supporting it,” he says. “Finding a drug that reduces heart attack size in patients undergoing angioplasty and stenting procedures for heart attacks, while cooling them down, seems like it should be complementary. If that potential is realized, it would be a major event.”

And this new study just may reveal that potential.

Disclosure: The author has reported no conflicts of interest with the sponsors of this supplement.

This article originally appeared in an editorial supplement to the September 2011 JEMS as “Chilled to the Bone: New study to evaluate hypothermia for STEMI patients.”