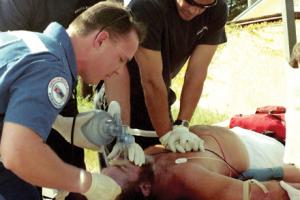 As a refresher, Troponin-I is a protein released into the blood stream when cardiac muscle dies. It’s especially useful in the diagnosis of myocardial infarctions that don’t have changes in their ECG, such as a non-STEMI.

This study evaluated the prehospital use of the i-STAT from Abbott Inc., a handheld point-of-care device, to measure Troponin-I levels.

The device is supposed to be placed on a flat, even surface and not moved for approximately 10 minutes. Thirty-nine valid samples were collected, with all of them being nearly identical to hospital results tested in a lab setting. No false positives were recorded from the samples tested in the ambulance.

This tool looks promising for detection of non-STEMI or in the cases of patients where the ST-segment has already returned to baseline. The study authors point out that this is an expensive device that requires several steps, including placing blood in a vial, shaking it and then placing it in the i-STAT cartridge.

This Japanese study evaluated nine paramedic students’ ability to perform CPR in both a standard kneeling position as well as in the back of a moving ambulance. The students were all from a cohort group that was statistically similar for height weight and body mass index. The students, who were monitored with an electromyograph (EMG), performed CPR on a Rescusci Annie with data recording for compression rate and depth.

EMG results showed that kneeling CPR used multifidus muscles (hip, bicep and, partially, triceps). During ambulance CPR, the triceps, deltoids and pectoralis were used. Of course, standing CPR in the back of a moving ambulance was less effective in depth and rate and less consistent than kneeling. It’s interesting to note that in Japan, stretchers sit on a vibration proof stand, which actually makes the patient closer to the waistline.

Bottom Line:
What we know: There is a growing body of research shows the quality of CPR is linked to survival.
What this study adds: This gives us a first-ever analysis of muscle groups that are needed to perform quality CPR.

Quartile regression is a method of statistical analysis meant to predict trends over time using several factors, generally for comparing the results against the average for all data collected.

Although intuitive, “More calls equal fewer ambulances and longer response times,” research like this pushes us to better understand and plan for resources needed to maintain rapid response times.

This Australian study has all the hallmarks of great research–randomized, double-blinded, multi-center studies. Emergency department physicians from three large metropolitan hospitals were given sealed kits that contained either a placebo, olanzapine (Zyprexa) or droperidol–each of which was given IV in conjunction with midazolam (Versed).

This was a double-blind study, so neither the provider nor the facilitator knew which medication the patient received in adjunct to the Versed.

Patients were then given subsequent doses of midazolam until sedation was achieved. Patients in the control group (midazolam-placebo) were nearly twice as likely to require re-sedation at 60 minutes than were patients who received droperidol and midazolam.

Droperidol earned a black box warning after concerns that high doses could prolong QT, leading to Torsades de Pointes. It’s important to note that no patients in the droperidol group (112 patients) developed a prolonged QT or Torsades at any time during their hospital stays.

Bottom Line:
What we know: Droperidol has fallen out of favor in EMS, having been replaced with the “safer” Haloperidol and Ketamine.
What this study adds: It’s strong evidence for the use of combination therapies.

New Position on Immobilization
National Association of EMS Physicians (NAEMSP), American College of Surgeons Committee on Trauma. EMS spinal precautions and the use of the long backboard. Prehosp Emerg Care. 2013 Mar 4. [Epub ahead of print.]

Backboards are uncomfortable and largely unproven to improve outcomes.  Big (but unsurprising) news from the NAEMSP. A new position statement on the use of long backboards suggests a C-collar and stretcher for neurologically intact, un-intoxicated patients with no distracting injury. While a position paper is not formal research, it does represent a consensus of opinion that can come from the best available evidence, and can often prompt research or protocol changes.

Unlike the 1999 position on spinal immobilization, this early online version did not include references at the time this column was going to press. Look for the position statement to appear on the naemsp.org website in the near future.

Stay tuned for more sepsis studies as they continue to show EMS providers can make a big difference in survival. Early implementation of goal-directed therapy, such as aggressive fluid therapy and early emergency department (ED) notification, is the common thread.

These researchers presented this abstract at the National Association of EMS Physicians scientific assembly in January. Nova Scotia paramedics were asked to diagnose sepsis early in the field. Their diagnosis was compared with that of the ED physician. Paramedics accurately diagnosed sepsis 78% of the times, but were more specific than sensitive. As the study authors point out, prehospital use of temperature measurement and point of care lactate analysis may contribute to more accurate diagnosis of sepsis in the future.

Watch Box: Energy Drinks and Strokes
Authors’ note: Readers sometimes suggest reviewing case reports that are published in peer-reviewed journals. Be careful. These are single cases. They’re the “war stories” of journals. Although sometimes interesting, they should be taken with a large grain of salt–like the one we’re sharing here:
Case Report: Do energy drinks cause epileptic seizures and ischemic strokes?
Journal: American Journal of Emergency Medicine
Summary: An otherwise healthy 37-year-old man in Turkey seizes after consuming large amounts of Red Bull mixed with vodka on an empty stomach. The patient was then found to have brain ischemia on MRI. The amount of caffeine in energy drinks is alarming; however, did this or the alcohol cause the patient to seize? Look for research studying the long-term effects of high-dose caffeine soon. Maybe it’s time to switch to decaf?

Is There Such a Thing as Drinking Too Much Water?