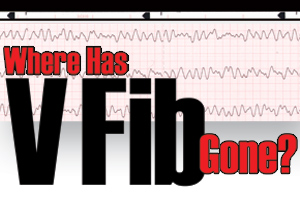 EMS teams respond to an estimated 300,000 cardiac arrests each year in the U.S.1 Since the first days of modern EMS, v fib has been the face of cardiac arrest. BLS and advanced cardiac life support (ACLS) programs emphasize the treatment of “shockable” rhythms, v fib and v tach, and they even enjoy their own link in the chain of survival–early defibrillation.

The other rhythms, pulseless electrical activity (PEA) and asystole, have had less attention because most cases–and almost all survivors–first present in v fib. But this is all changing. The incidence of v fib has steadily dropped over the past 20 years, so all EMS systems need to recognize and rethink their strategy for treating cardiac arrest patients in the field.

Ventricular Fibrillation
Sudden cardiac death is often a continuum: v tach, v fib, PEA and asystole. If the heart goes into one of these rhythms, it will cease to effectively pump. Unless promptly treated, inadequate perfusion of the myocardium will progress within minutes to asystole. The etiology of v fib isn’t completely understood. It’s most often the result of an acute coronary syndrome. About half of sudden cardiac arrest (SCA) survivors are diagnosed with an acute myocardial infarction (AMI), and it’s more likely in the months after a myocardial infarction (MI). Significant left ventricular dysfunction, a number of cardiomyopathies and conduction abnormalities also put patients at an increased risk.

V fib has been the driver of many important EMS milestones. One key figure in the treatment of cardiac arrest, and especially v fib, was William Kouwenhoven. Starting in the 1930s, Kouwenhoven discovered that application of an electrical shock both caused and reversed v fib. In the process, by noting that pressing on the chest with defibrillator paddles created a pulse, he also introduced external cardiac compression.

Credit for out-of-hospital defibrillation goes to Frank Pantridge, MD, one of the fathers of EMS. Pantridge theorized that home treatment of an MI might prevent prehospital deaths from v fib and developed the first defibrillator-equipped mobile intensive care unit (MICU) in Belfast, North Ireland. In the first 15 months, 312 chest pain patients were treated in his MICU, 10 went into v fib, and all were successfully defibrillated.2 His publication in 1967, at a time of national attention on improving EMS, helped launch the cardiac arrest care system we have today.

A Seattle study found that if CPR could be started in four minutes and defibrillation with advanced care within eight minutes from the time of collapse, a much higher percentage of patients would survive.3 Therefore, the treatment of witnessed SCA (usually v fib) partly established today’s EMS response-time standards.

Data from the 1980s indicated that v fib was the initial rhythm in a large majority of cardiac arrests. One study from Seattle reported 75%, and another study of patients wearing cardiac monitors at the time of the cardiac arrest found 84% were in v fib.4,5 With the knowledge that v fib was the cause of the overwhelming majority of SCAs, and that survival from v fib was known to be greater than with other rhythms, research and efforts to improve cardiac arrest survival were directed to the treatment of v fib.

This bias continues today, but only part is still correct; v fib remains a far more survivable rhythm than PEA or asystole. The Resuscitation Outcomes Consortium (ROC), a group of 10 large research communities in the U.S. and Canada, recently reported 21% survival for patients in v fib but only 8% survival overall.6 But the other part is no longer the case; the incidence of v fib has declined substantially.

Two large cardiac arrest databases give us a good idea of where we stand today. The ROC group reported that 23% (2,729 of 11,898) of EMS-treated SCA patients, from May 1, 2006 through April 30, 2007, were in v fib.6 The Cardiac Arrest Registry to Enhance Survival (CARES), a large nationwide registry of more than 30 cities and counties, reports an identical 23% shockable (v fib/v tach) rhythm rate for 2009. Therefore, less than one in four cardiac arrests treated by EMS today is in v fib. The current rate of 23% is about half of what it was 25 years ago.

Why is V Fib Decreasing?
The trend seems unmistakable, but what could be causing it? We don’t know for certain, and its likely multiple causes exist. Numerous possibilities have been proposed.

Heart disease prevention and the resultant decrease in coronary heart disease deaths may be one explanation. From 1996—2006, the death rate from cardiovascular disease dropped 29%.1 Because v fib is often caused by an acute coronary syndrome, reducing the incidence of severity or coronary artery disease would do the same for v fib.

Another possible explanation for the decrease is the treatment of acute coronary syndromes, such as unstable angina and AMI. An aggressive management of the reduced coronary blood flow using nitrates, antiplatelet agents (aspirin), thrombolytics and/or percutaneous coronary intervention (e.g., angioplasty, stents) means the degree and extent of myocardial damage is limited.

Drug Therapy
The effects of three commonly used classification of cardiovascular medications have been specifically studied for their effect on the rate of v fib: beta-blockers, statins and renin-angiotensin-aldosterone system blockers. A 2007 analysis from Los Angeles found that patients taking beta-blockers were five times more likely to be in PEA than v fib.11 Laboratory evidence also supports this hypothesis. A study on rats showed that after inducing an AMI with ligation of the proximal left coronary artery, the likelihood of v fib was significantly less in animals given a beta-blocker for the two weeks prior.12

Statins are a class of drug used to lower cholesterol levels. A recent review and analysis concluded that statins reduced the incidence of v fib in patients who had underlying coronary artery disease and that the mechanism appeared to be by reducing ischemia rather than acting as an antiarrhythmic.13

Renin-angiotensin-aldosterone system blockers treat heart failure and have been shown to reduce the incidence of sudden death.14 The same rat study mentioned above for beta-blockers showed that captopril, an angiotensin converting enzyme inhibitor, also reduced the likelihood of v fib after coronary artery ligation.15

Early Treatment
Yet another contributor is the early treatment of v fib. Implantable cardioverter-defibrillators (ICDs) are being increasingly used to immediately treat v tach, with a conversion rate approaching 100%. If these patients access EMS at all, they’re unlikely to present in v fib. Researchers in Rochester, Minn., postulate that ICD therapy may eventually account for 10—33% of the overall reduction in the incidence of v fib.15

A more recent device is the wearable cardiac defibrillator (WCD), which is a combination of lightweight garment and monitor. This device is used for those patients at high risk, often temporary, of v fib or v tach. Candidates for WCDs are patients after an AMI, cardiomyopathy or heart failure, or before or after bypass surgery. It also has a nearly 100% cardioversion success rate.16

EMS Implications
As the indications for these treatments have broadened, more patients receive them and fewer will present to EMS in v fib. For example, patients with an ejection fraction (amount of blood that’s pumped out of the left ventricle with each contraction) of less than 30—35%, far less than the normal 50—70%, are now candidates for an ICD–even if they’ve never had v fib or v tach.

One final suggested explanation involves response times. We know that untreated v fib converts to PEA or asystole after a few minutes. Some speculate that one factor in the reduction of v fib as the presenting rhythm may be slower response times due to urbanization of communities.7 However, other systems have reported both a shorter time-to-defibrillation and a lower incidence of v fib, so this remains an open question.

EMS providers should also be aware of the importance of PEA and asystole treatment. As the relative percentage of v fib declines and PEA and asystole rises, the total number of PEA and asystole survivors will eventually be greater than those in v fib. This is already the case for in-hospital cardiac arrests, and EMS may be able to learn from approaches used in that setting.

Next, let’s not forget the importance of measuring and reporting cerebral performance category (CPC) scores. V fib survivors typically have better CPC scores than those in PEA or asystole. A patient who returns to home and work (CPC 1) is far different than one who’s comatose or in a persistent vegetative state (CPC 4). Both are “survivors,” but the personal, family and economic implications of survival are varied, and these data are critical.

Finally, this shift in rhythms necessitates the reevaluation of the efforts specific to v fib. Public access defibrillator (PAD) programs are one example. These have been, and continue to be, valuable components of our EMS system and require constant attention.

Conclusion
We should acknowledge that many of the contributory causes make this a positive trend. As an example, immediate v fib treatment by an ICD, before EMS arrival, is a positive event. Although it may make it more difficult for EMS to improve cardiac arrest survival statistics, this is a success for the health community.

Individual communities and EMS systems should be taking this opportunity to reexamine their own cardiac arrest outcomes to see how this trend is reflected in their experience. This has been a gradual but steady process, and unless you look at the data with this trend in mind, it may not be readily apparent. We can’t simply look at witnessed v fib survival, because the number is higher and more impressive. Instead, providers must examine PEA and asystole with the same scrutiny.

More research is needed in how to approach PEA and asystole. One example is what crews should do if v fib occurs during PEA. Should providers defibrillate immediately or first perform two minutes of CPR? There’s some data to suggest the latter, but it isn’t yet firmly established. For CPR, continuous chest compressions without ventilations is an alternative method. However, although this seems to improve outcomes in v fib, ventilations may be essential for PEA or asystole.18

It’s a common but inaccurate perception that survival from a non-shockable rhythm is essentially zero. In reality there’s a wide spectrum of survivability in these patients. A study from Sweden found that although the overall survival of patients found in a non-shockable rhythm was only 1%, if patients met six criteria (young, witnessed arrest, bystander CPR, cardiac arrest outside home, shorter response time and defibrillation) the survival was 13%.19

As we learn more about the treatment of cardiac arrest patients in non-shockable rhythms, our approach will change and survival will improve. Restoring the maximum possible circulation to the brain and myocardium is critical to increase survival and preserve cerebral function. Currently, the one essential treatment for all cardiac arrests is immediate, consistent, high-quality chest compressions with the fewest interruptions for the shortest duration possible. JEMS

This article originally appeared in December 2010 JEMS as “Where Has V Fib Gone: Why today’s EMS crews see less ventricular fibrillation in the field.”