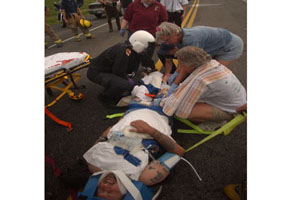 From the beginning of the evolution of humans, the ability to stop bleeding has been paramount to our survival. Humans have managed to survive severe trauma for thousands of years. Written records of medical interventions date back to the ancient Greeks and Romans.

In the first century AD, Greek physician Rufus of Ephesus described all methods of hemorrhage control known to exist in the ancient world: digital compression, styptics (i.e., hemostatic agents), cautery, torsion/tourniquet and ligature, or ligation of blood vessels.1 His assessment was very detailed and, in fact, the same techniques are still used today in prehospital and hospital settings.

In some respects, little has changed for first responders regarding their options for hemorrhage control, and yet the problem of major bleeding continues to stymie both prehospital and hospital care providers.

Worldwide Killer
Traumatic and non-traumatic causes of hemorrhage carry significant mortality and morbidity. Approximately 5 million people die every year around the world from accidental and non-accidental trauma, making trauma the leading cause of death in people under the age of 45.2

Exsanguination accounts for approximately one-third of these deaths and the majority, which are due to exsanguination, occur within the first 48 hours.3,4 Massive hemorrhage is second only to neurologic injuries as a cause of death due to trauma.5

Hemorrhage carries with it not only the threat of immediate death due to blood loss, but also increased mortality due to multi-organ failure and sepsis.6 Massive blood loss often starts a cascade of shock, inflammation and coagulopathy that can worsen blood loss and foil attempts at resuscitation. Despite advances in transfusion medicine and medical care, massive blood loss is still a major cause of mortality–whether you’re in a third-world country or even a first-world one.

In addition, significant morbidity is associated with massive blood loss. Massive transfusion is defined as replacement of a patient’s entire circulating blood volume in less than 24 hours. One recently published study looked at more than 900,000 patients undergoing massive transfusion and non-cardiac surgery. The researchers found more than 54% had at least one major, non-fatal complication.7

Complications of massive transfusion include coagulopathy, hypocalcaemia, hyperkalemia, hypothermia and transfusion-related lung injury (TRALI).8 Coagulopathy may be dilutional if the patient is only transfused with packed red cells or secondary to disseminated intravascular coagulation (DIC) if the patient has delayed resuscitation or inadequate perfusion.

Hypocalcaemia can occur when citrate is used in packed red cells, platelets and fresh frozen plasma. Citrate binds calcium, and though it’s metabolized by the liver, this is slowed if the patient is hypothermic. Hypocalcaemia can also cause hypotension, further exacerbating inadequate perfusion.

Hyperkalemia is rare but can occur if the patient is acidemic or hypothermic. Hypothermia can occur because packed red cells are stored at 4 degrees Celsius and may be difficult to rewarm quickly.9 TRALI occurs as an immune or non-immune related process and presents as acute respiratory distress syndrome (ARDS) during or within six hours of transfusion.10

One Canadian study of deaths due to trauma at a Level 1 trauma center found that up to 16% of deaths would have been preventable with earlier recognition of bleeding and more rapid and effective hemorrhage control.11 In Canada, that would amount to approximately 2,400 additional lives saved per year (an equivalent of approximately 24,000 U.S. deaths).

The majority of these preventable deaths are from unrecognized bleeding in the abdomen and pelvis. There are, however, preventable deaths due to isolated extremity trauma every year as well. A review of trauma patients presenting to two U.S. trauma centers suggests  that death due to isolated extremity hemorrhage is rare (0.02% of  traumas), but greater than 50% of those deaths were potentially preventable with tourniquets.12

History of Hemorrhage Control
Getting medical personnel to recognize the seriousness and significance of hemorrhage has been a problem throughout the history of trauma care. Oddly, from the ancient world until the early 20th century, “bloodletting” was actually prescribed to treat a multitude of ailments including hemorrhage. It was common practice prior to surgery, and prior to amputation, for doctors to first “bleed” a patient the approximate amount of blood contained in the limb in an effort to decrease inflammation and infection.13

Bloodletting was considered an effective treatment to “cause hemorrhages to cease” until the late 1800s, and Sir William Osler still advocated bloodletting in the Principles and Practice of Medicine in 1923.14 Interestingly, this was at the same time that transfusion medicine and blood-banking was becoming safe and an accepted practice.15

George Washington is a famous example of how death was hastened by bloodletting. After becoming ill, Washington called for a physician to bleed him. He underwent the procedure three times, having approximately 3.7 L of blood removed in 10 hours. He died shortly thereafter.16 Although therapeutic phlebotomy is still in use to treat hemochromatosis, it thankfully is no longer part of trauma care.

Methods of controlling hemorrhage have fallen into and out of favor throughout history, but the proven principle of direct pressure has been in use for thousands of years. Some of the earliest written accounts of the management of wounds by direct pressure go back to Homer’s Iliad. Application of salve and dressings are described after irrigation. Cautery and the use of “seething oil” were popular for control of hemorrhage for centuries–right up until the American Civil War, when ligature and amputation became favored.17

The Controversy of Tourniquets
Tourniquets, now returning to EMS units throughout the world, have been a source of controversy since the birth of medicine. During the Roman Empire, the surgeon Galen of Pergamon denounced them as “forcing more blood from the wound.” During the Civil War, Confederate surgeon Julian John Chisolm described them as “of no avail.”18

In the Second World War and Korean War, pressure dressings became first-line therapy, with tourniquets reserved for last resort. In the past several years, tourniquets have come back into favor with the knowledge gained during the wars in Iraq and Afghanistan.19

Research from the wars in Iraq and Afghanistan would suggest that not only are there low complication rates with tourniquet use but also significant survival benefit in patients with severe extremity trauma associated with their early use, particularly if the tourniquet is applied before the onset of shock. An article by Kragh et al in 2009 suggests that survival rates when tourniquets are applied are as high as 90% vs. only 10% when shock is present.22

Hemostatic Dressings
The wars in Iraq and Afghanistan have also seen the development of a variety of hemostatic dressing agents. These agents vary from powdered granules poured into a wound, such as early versions of QuikClot, to impregnated gauze, such as HemCon and CombatGauze. These agents all require direct pressure for 2—5 minutes for maximum effectiveness and have not been found to be more superior to plain gauze for wound packing in many instances.23

Our Current Approach to Trauma Care
Just as the agents used for hemostasis have evolved, so too has the approach to trauma and bleeding. The first description of the airway, breathing and circulation (ABCs) approach to patients was in the 1950s by Peter Safar, MD.24 This was followed until James Styner, MD, FACS, pioneered the advanced trauma life support (ATLS) approach of airway, breathing, circulation, disability and exposure (ABCDE) in 1976.25

In the years since, the emphasis has been that airway and breathing issues take priority over circulation issues and dressing wounds. Although this approach may be the right one for the majority of trauma patients, it can create delays in managing hemorrhage if providers are too focused on the airway and not enough on controlling active bleeding. A concurrent approach, if possible, is best, and most trauma teams are designed with that in mind.

Recently there’s been another shift back toward prioritizing the control of massive hemorrhage even before dealing with airway or ventilation issues. The military has taught the massive hemorrhage, airway, respirations, circulation and hypothermia (MARCH) concept since the mid-1990s, but this approach has really come to the forefront in the past decade. This is a result of the recent finding that most battle casualties die within 10 minutes of being wounded and the majority of those die from exsanguination.26,27 By placing the emphasis on stopping major bleeding first, the aim is to reduce the need for massive transfusion and prevent complications associated with major blood loss.

This necessitates a shift in thinking. For years, EMS providers have been taught that there’s no point in dressing a wound if there’s no airway. And it’s true that 2—5 minutes of direct pressure is too long if the patient is apneic or has an airway obstruction. However, quick tourniquet application takes only seconds and then allows a practitioner to have both hands available for other treatments.

Conclusion
Despite major advances in trauma care and medical devices, massive hemorrhage continues to have significant morbidity and mortality to this day. Early recognition and appropriate action is necessary to prevent complications and loss of life.

Adequate hemorrhage control must take place in the prehospital environment, and EMS systems must keep pace with changing protocols. Waiting until the emergency department or operating room to try to achieve hemostasis is like closing the barn door after the horses have escaped.